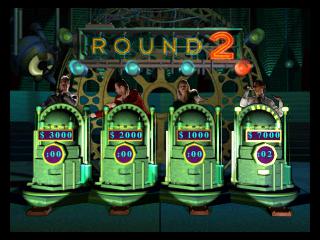 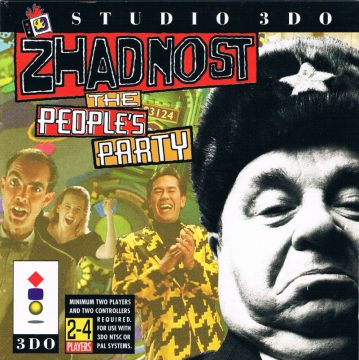 By 1995, the end of the 3DO was more than evident. Even with the launch of the Playstation being several months ahead, the system’s fortunes had been quickly dwindling. Despite this, Studio 3DO, the system’s primary first-party developer, would make a valiant effort at pushing out one final handful of big –budget titles to try and save the system. For the final time in the system’s three year lifespan, there would be another party game, to follow in the steps of Twisted and Club 3DO before it. In the end, they saved the best for last, as Zhadnost makes for a great improvement that’s actually more than worth playing with a pack of friends. It’s a shame such a big improvement had to come right before the end.

Somewhere in the Eastern European country of Bizarrnia, rebels have managed to overthrow the Communist government and take power. Bob Blini, the (suspiciously American-sounding) leader of the revolution, takes the first steps in this new, all-capitalist society by… hosting a game show. The five potential contestants are Bizarrnian citizens who’ve ended up being forced onto the show, with the prize for the winner being “deportation to America”. More personally, each contestant has their own personal fantasy they hope to see come true should they win. The contestants are generally a lot more colorful, this time around, even if a couple of them are… somewhat unpleasant, in our more modern times. 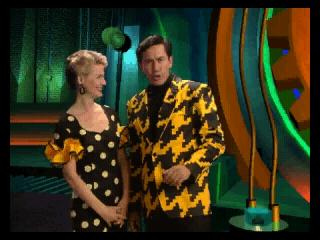 Dr. Grushenka Ruble is Bizarrnia’s top scientist, who has dreams of becoming a fashion designer in America. Colonel Ivan Kropotkin, despite his intimidating nature, hopes to become a stand up comedian. Ivana Borchnik wants to move on from her violin performances and move into rock, should she win. There’s also “Zygi”, a Russian gangster who has ambitions of becoming America’s president. On that uncomfortable note, there’s finally Ludmilla Pectroalvitch, an athlete who has dreams of becoming a model. Which would be fine, except for the fact that she’s quite clearly played by a man, in a joke that really should have disappeared even back in the 90s. 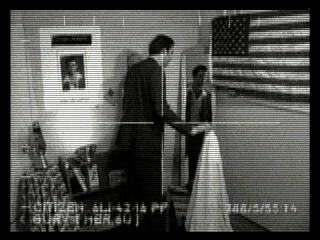 To start, you’ll need at least two players on hand, up to a total of four contestants. This time around, however, you’ll need a second controller plugged in. For the first time, two players can be involved with the action at once, and this changes the dynamic of the entire game dramatically. Certain releases of the game even came bundled with a free 3DO controller, which indicates they must have had at least some confidence in the concept. 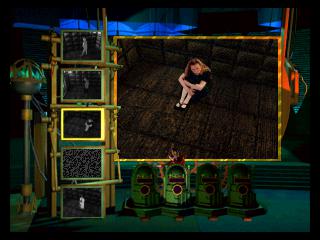 A match of Zhadnost lasts for three rounds, during which each player gets one turn. When it’s your turn, you’re given a grid of icons and a cursor. You can move this cursor only horizontally or vertically, but the twist is a randomly selected opponent can move in whatever directions you can’t. The two of you will then have to wrestle the cursor over one of the icons before time runs out. Most lead to minigames, but some have the faces of the contestants involved in the struggle – landing on one of these has the player in question become an instant winner. 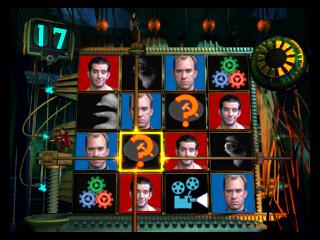 In the typical tradition of these games, the various minigames you’ll encounter are simple brainteasers of various sorts. This time around, however, you’re competing directly with another player to try and accomplish a goal or score more points than they do, first. This simple addition does a lot to add to the excitement of the proceedings, and it makes for a much more interesting game overall. Previous games tended to feel more like dressed up IQ tests, while here, it’s more of an actual competition. Unfortunately, the other two players will still have to sit and watch, but it’s a very nice step regardless. The various minigames are generally stuff that have been seen before – matching more pairs of pictures of sound  before your opponent, answering trivia questions – almost all of which are framed around American culture and history, and unscrambling motion pictures before your opponent can first. The only really new minigame is Troika, in which you’re tasked with selecting three sets of icons, with points being scored by having them match by color, number, and shape. 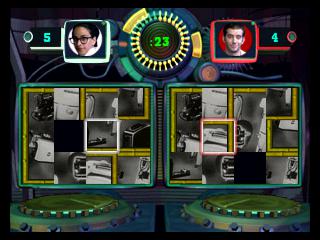 Winning minigames earns you time, which gets added to a certain amount that all players get for free. Once all the players have had a turn, everybody moves onto the Money-Go-Round. Your character is placed on a wheel of rotating platforms, each of which has a colored circle upon them. By stepping on one of these circles, you’ll change it to your color and earn some cash. The more time you’ve earned in a minigame, the longer you get to stay on the wheel. Run out of seconds, and your time on the wheel for this round is over. However, by stepping on the circle in the middle of the wheel, you’ll end your turn early, but you’ll get to return to it should you have any time on your clock remaining. 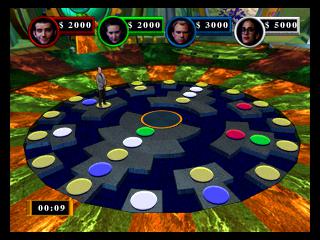 The catch is that once it’s no longer your turn, the other players are more than free to step over the spaces people have claimed, turning them back to neutral and subtracting from your opponents’ potential cashout. If they so choose, they can then step back onto it one more time and claim it for themselves. This actually adds a little strategy to things —  do you try to get through the wheel as quickly as possible, so you have the time to try and grab the spaces your opponents spent their whole time stealing? Or do you try and claim as much territory as you can in one long run? If you’re feeling particularly spiteful, you can make it your goal to try and turn as much territory back to neutral as you can so nobody gets to score. There’s a lot of potential to be a huge jerk here, something which was so sorely missing in Twisted and Club 3DO.

Once everybody’s used up all their time on the Money-Go-Round, whatever money they earned gets banked, any leftover time the players have is banked, and play moves onto the next round. Each time you visit the wheel, every space is worth more, which helps the players who are falling behind catch up. After the third round and the final go around on the wheel, the player with the most cash wins the game. Soon after, the former government retakes the country, implying that this whole mess is going to keep repeating itself. At least every character has multiple endings for what happens when they achieve their dreams, which adds some extra incentive to keep playing.

The game’s sense of humor is admittedly, rather dated – pretty much every joke pop culture has made about communist countries can be found here, and none of it is any more original here. Some of the contestants can be pretty entertaining, like watching Ivana smash her violin into the floor like a rockstar, while the less is said about Ludmilla, the better. What should be lauded however, is the presentation, which really gets the feeling of a wacky game show quickly shoved onto communist state television pretty well. The fact that everybody is constantly dancing for no adequately explained reason also manages to stay funny, even if not everything else does. The soundtrack is also pretty spectacular, featuring a lot of surf rock – including a cover of the Olga March while you’re selecting a minigame. The soundtrack’s so good that this is one of the few 3DO games to have an official OST release. 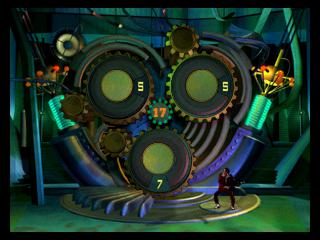 It took a long time to get to this point, but Zhadnost finally makes for a game that’s just as entertaining to play with friends as it to sit and watch the FMV goofiness. It lacks the variety and interaction of the flood of party games that’d hit the systems that would follow the 3DO, but while it lasts, it’s still a pretty good time. If anything, it could be called one of the 3DO’s biggest hidden gems, and it’s a true shame that it’s not one of the few games that would end up hitching onto the Playstation and Saturn. There may be better party games after its time, but it’s the still the best way to entertain your friends on a console that once seemed so state of the art.