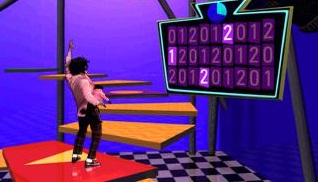 The year is 1993, and you’re one of the relatively few but proud new owners of a 3DO. The first thing you’re probably going to want to do is find some games you can show off to all your friends. Unfortunately, you’ll end up somewhat lacking in options. There’s always the pack-in racing game, Crash N’ Burn, with its 3D graphics and texture mapped tracks. Certainly not the worst option, but maybe you’re looking for something better-suited to showing off the system’s multimedia capabilities. Maybe you’d even prefer to have your friends play with you. A tall order, but you’ve still got one option. 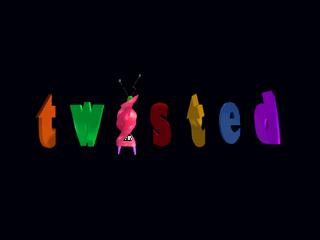 As one can gather from the title, Twisted: The Game Show is a game show set in the world of television. Not a game about a television studio, or the people who work for it, to be clear; the game is set in a little world behind the TV known as the Palindrome, which the six playable characters are all vying to escape from, probably because the place looks like some sort of surreal cross between the Red Room from Twin Peaks and the colorful geometric shapes that defined the early ‘90s aesthetic. Also present, but not playable, are Twink Fizzdale, the host of the game, and his assistant Hannah, who doesn’t do much besides make wacky hand gestures as various events in the game occur. 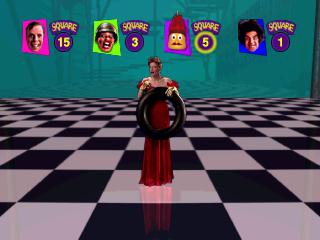 Befitting the game’s television theme, the playable characters are all generally stereotypes of the worst sorts one could encounter on ‘90s daytime television. There’s greedy televangelist Humble Howard, tough military fitness show host Major Steel, phone psychic Elaine, and ‘50s greaser Johnny Pow. There’s also Wormington, who is joined by a little black dog in a sweater named Otis, instantly making him one of the more desirable characters. Finally, there’s inexplicably a CGI Pez dispenser wearing a fez and packing a stereotypical accent named, sensibly enough, Uncle Fez. Every character is generally identical, except for the video clips they have for when certain events occur. However, they don’t really have a lot of actual personality beyond the stereotype they’ve been pinned with.

Random trivia: Johnny Pow’s actor, Tohuro Masamune, would have the most prolific acting career after this game. He would go on to have quite a few voice acting and live action roles, most notably Shredder in Micheal Bay’s Teenage Mutant Ninja Turtles. 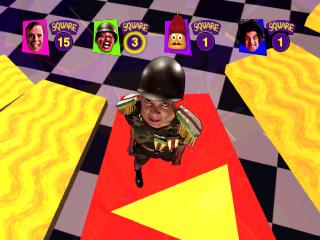 The goal of the game is relatively simple: traverse the hundred squares that make up the Palindrome and get to the end before the other players can. Each player’s turn begins by rolling the “CyberDie” to determine just how many spaces you’ll move. It’s entirely possible to roll a 0, in which case the game will end your turn right there, playing a clip announcing you’ve won “nothing”. Should you avoid this fate, you’ll then land on one of the various colored squares that make up the board, each of which leads to various events. Some squares will make you lose your next turn, some let you roll again, but the majority are “challenge” squares, where the meat of the gameplay takes place. 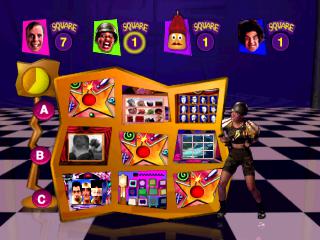 Whenever you land on one a “challenge” square, a separate player will randomly be called on to select one of three rows presented on a 3×3 grid. After that, you get to select a column; the square chosen by the resulting intersection determines what happens next. The rub is that the game doesn’t tell you what the other player picked, so whatever gets selected will generally boil down to luck. If you’re unlucky, you’ll end up selecting the bomb, which will instantly end your turn – after showing you some stock footage of a nuclear explosion, of course, because this game will take any chance it can to remind you it was made in 1993. As the game progresses, the chance will also appear to pick squares that let you roll again, or even swap places with the other player who got called on. 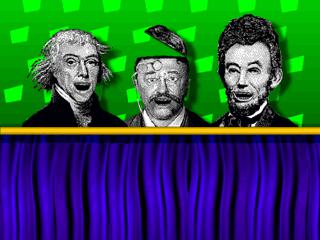 Most of the time, however, you’ll land on one of several minigames, successful completion of which will allow you to take another turn. Compared to later games in the genre, however, almost all of these minigames are puzzles, only rarely calling on any reflexes. You’ll find matching games of both the image and sound variety, or sliding tile puzzles involving both still images and public domain footage. There’s also trivia, which can be set to three different difficulty levels or disabled entirely. There’s no shame in that last option, since the trivia goes so deep into ‘90s pop culture, politics, and other contemporary subject matter that most players nowadays will be completely lost. The most action-oriented the game gets is “Zapper”, in which you have to quickly maneuver a crosshair across a screen of TVs, selecting the ones that start playing commercials to prevent a fuse from running out. 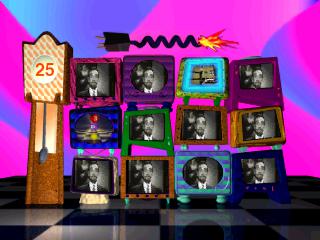 None of the minigames, however, allow anybody except the current player to do anything aside from waiting for the timer to run out. This is a fault that permeates the entire game, and with a full four players, matches can drag on for an ungodly amount of time. If it’s not your turn, you’ll be forced to wait for other players do the minigames without you, you’ll have to watch every video clip that the game plays, which only takes longer with the load times typical of early CD-based systems. A typical match of Twisted can take between 45 to 75 minutes to finish, and you’ll have seen all the minigames long before then. About the only real variation is the game’s difficulty system that makes the minigames harder the more you win them, but that hardly adds to the excitement. 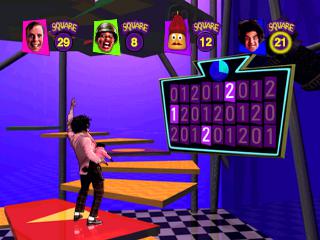 That’s not even counting all the times you might get hit with a bad dice roll and end up losing your turn. If you’re especially unlucky, you’ll land on a space that’ll bring you to the Wheel of Torture. It’s thankfully not as grim as It sounds, being a spinning wheel that spins your character round and round. The only way to stop your character’s hysterical screaming and goofy carnival music is to hit the A button as three of the same fruit interlock on the wheel. Unfortunately, depending on how hard the game currently is, it’s quite possible to end up missing several turns until the game takes enough pity on you to give you an easy set of icons. This can put you a good distance behind the other players, but it’s always possible that you’ll end up switching positions with one of your rivals. 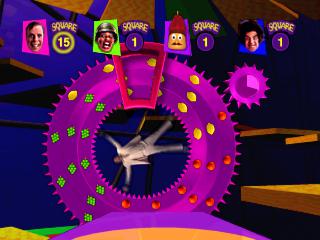 Overall, it makes for something that a group of modern players will be unlikely to stick to for the gameplay alone. That leaves the game’s sense of humor, which ranges from giggle-worthy to somewhat painful. Watching Wormington scream for ”Otis” to run away from the giant cartoon bomb he’s holding is pretty funny the first time you see it; it loses its charm by the third or fourth time, as does the way the characters complain at you any time you end up losing a turn. It certainly doesn’t help that the video footage isn’t skippable; you can only watch the same black-and-white footage of a nuclear explosion so many times. The highlight of the presentation might have to be the commercials that play every so often, including such ridiculous products such as inivisible dog toys (dumb mutt not included), as well as the Rug Club, the toupee that doubles as a bludgeon. 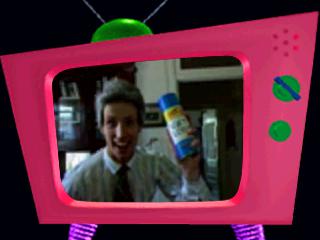 It’s difficult to say whether Twisted really succeeded at what it was trying to do. Taken as something meant to show off the 3DO, its frequent use of full motion video and its four-player support would certainly be impressive for the time. As a game, however, it’s far too repetitive and arduous for a modern group of players to stick through an entire trek to the other end of the TV screen. Overall, once you get past the multimedia, it isn’t much more of a step up from games like Anticipation. Still, the bright side is that while the 3DO was still chugging, they’d refine the concept and take it in some interesting directions.