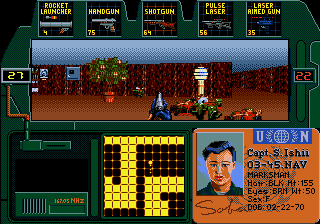 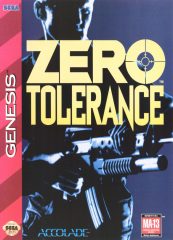 The Sega Genesis wasn’t exactly known for its ability to handle first-person shooters, but that didn’t stop four different efforts from getting a commercial release. Zero Tolerance was released by Technopop in 1994, so it wasn’t the first attempt on the console (that honor belongs to Core Design’s Cyber-Cop), nor was it the last (Brazil’s exclusive Duke Nukem 3D port gets that distinction), but it remains the most creative effort of them all and has garnered a cult following as a result. Nowadays, it’s far too archaic and tiresome for most to stomach, but its sheer ambition alone deserves special credit.

“Zero Tolerance” refers to the elite squad of five specially-trained commandos that you control during the game. The campaign takes place over the course of three different areas that cover different missions, similar to the episodic approach used in contemporaries like Doom and Duke Nukem 3D. The first area is the Europa-1 flagship of the Planet Defense Corps, the military conglomerate that employs the Zero Tolerance squad, where your job is to eliminate the aliens that have attacked the ship. The second area has you returning to Earth, where you have to descend through the massive Planet Defense Corps base to fight the aliens that have mounted a counterattack after your victory at Europa-1. The third and final section of the game has you pursuing the aliens through the deepest basements of the Planet Defense Corps building in order to finally end their assault.

Each member of Zero Tolerance comes with their own starting equipment and character-specific perks. For example, Scott Haile starts off with an explosive mine to use, whereas the medic of the team, Justin Wolf, gets extra health from medpacks and starts with a Bio Scanner that displays enemy locations and their proximity on your radar, similarly to how the M314 motion tracker in Aliens worked. Not all characters are equally useful though – Tony Ramos specializes in melee combat, which is typically as bad of an idea as it sounds, whereas characters that specialize in standard gunplay like Satoe Ishii and Thomas Gjoerup are far more reliable. Since characters that die are gone for the remainder of the game, it could be argued that the imbalance is intentional; to maximize their chances, it’s up to players to discover which characters are useful for specific levels and which ones need to be preserved to stand a chance against the overwhelming barrage of aliens in the final area. It’s a shame that the squad members never speak or have a background beyond what’s on their ID cards, because the cast is uncharacteristically diverse for the time.

Zero Tolerance takes place across a whopping 40 levels, and your goal is to eliminate every single alien that populates each level. That is, if you want to – it’s possible to spare some foes or just make a beeline for the exit in each level as well, which has benefits and drawbacks. Defeating every single alien is the only way to get passwords that let you save your progress for future sessions. However, levels are filled to the brim with aliens, and defeating them all makes the game feel massively dragged out. Early levels have several dozen aliens, and by the end of the game, you’ll have to defeat well over a hundred per level before you’re finally rewarded. While avoiding everything makes the game move much quicker and potentially conserves ammo, it’s a risky proposition; the moment you skip past a level without clearing it out, you can no longer get passwords from any subsequent level in the area unless you go back and clear that level out. Passwords are thankfully given out after the completion of the first two areas regardless of what you do, but that means getting through ten or more levels without losing your squad, which becomes an increasingly unreasonable strategy near the end. This system gives Zero Tolerance a unique flavor of risk versus reward not unlike something you’d see in a roguelike, but it also means that the game never feels comfortable to play, with your choices making it extremely tedious or needlessly stressful.

Your arsenal of guns includes some fun choices like a flamethrower, a couple of laser guns, and mines that can be used to deal with pursuers, but all of the guns feel exactly the same and are all capable of dealing with aliens quickly enough. The shotgun is the one exception, since it’s accompanied by a fantastic sound effect that makes it endlessly satisfying to rely on. There are some supportive items to find, such as a bulletproof vest that blocks hits and a fire extinguisher that can be used to open new paths, but these don’t do much to mix up the gameplay. You’re also limited to only five items at a time with no way to drop items, so it can be frustrating to have to waste ammo just to use an extinguisher for one flame. You have a few other maneuvers, including the ability to crouch, jump, and strafe, which do help to make the proceedings a bit more technical and interesting at times.

Things start off promising at first, with the Europa-1 having a decent amount of variety, but once you get to the Planet Defense Corps building, the game gets repetitive to the point of absurdity. Each area establishes a template that is then practically copy-pasted for ten levels or more. Almost every floor of the Planet Defense Corps building is a wide, dark room filled to the brim with attack dogs and the occasional robot, and the basements that make up the final area are all confusing labyrinths with the same three aliens harassing you at every corner. There’s no setpieces, keycards, puzzles, or anything to change what you do, so the game often comes down to turning a corner, shooting whatever’s there, and repeating until you work your way to the end. At least the map is excellent, since it shows you the exact lay of the land without spelling out enemy placement or the exit’s location, requiring you to still put effort into exploration.

Some truly remarkable visual effects are present, such as the title screen’s use of dynamic lighting effects and the way that blood splatters against and slowly drips down walls, but the game itself runs at an uncomfortably slow pace at all times. Your character turns too slowly compared to how fast you’re expected to react to ambushes due to the low draw distance, resulting in punishing cheap shots. It also takes a second for your character to start running at full speed, which makes getting enough distance from the obnoxious wall-crawling aliens all the more annoying. Using certain weapons like the flamethrower or fighting a room full of aliens will tank the framerate as well and make things feel even more sluggish. The game also employs a strange effect in which your character will bounce around erratically whenever they’re shot, which only serves to make things more disorienting.

There’s only one music track per area and they’re all deeply unpleasant to listen to, containing plenty of the missteps that give the Genesis’s sound capabilities a bad reputation while repeating endlessly on short loops. The only standout track is the brief but infectious jingle that plays when riding elevators, which is a riff on the famous Brazilian bossa nova and jazz song known as “The Girl from Ipanema”. The UI is also a clear example of the compromises required to get the game working in how it constricts the action to a fifth of the screen while other elements, such as the useless ID card and the far more useful radar, take up significant chunks of real estate. The abundance of visual splendor makes a case for some ingenious programming skills, but it also makes you wonder if Technopop should have tried to release the game on a more powerful platform, such as the 32X or Sega CD.

Technopop’s ambition didn’t stop within the game itself and they really went the extra mile with trying to provide a one of a kind experience on the Genesis. If you manage to gather two TVs, two Genesis consoles, and two copies of the game, it’s possible to play cooperatively with another person by utilizing a link cable to connect two consoles to each other. This is the only game on the console to allow such a feature, so you had to mail out a coupon to Technopop in order to get a cable. If you’re interested in trying to get this set up nowadays, Technopop’s website has schematics that can be used to create a homemade version of the cable.

Zero Tolerance managed to receive a release on Steam in August 2020 thanks to Piko Interactive, but this version is essentially identical to the Genesis version. In 2005, Eidos Interactive was working on a game called Zero Tolerance: City Under Fire for the PS2 and Xbox, but they were hit with a cease and desist from Randel Reiss, the former president of Technopop, and were forced to change the game’s name, resulting in the creation of Urban Chaos: Riot Response. The cease and desist was filed on the grounds that Technopop was working on a PSP installment of Zero Tolerance, but this project was never completed.

A sequel to Zero Tolerance, dubbed Beyond Zero Tolerance, was worked on for the Genesis but was never completed. A prototype of the game was released on the internet by Technopop themselves and is still available as freeware. The story was intended to take place after the events of the original and would have starred a new batch of Zero Tolerance members as they took the fight to the alien homeworld.

The game itself is surprisingly playable for a prototype and several levels are seemingly complete. Much of the visuals and music are taken from the first game and certain things don’t work as intended, such as the guns being silent when fired. All new enemies appear and the guns that you can find are entirely different as well, though they have identical functionality to existing guns and are even referred to as such by the game’s event log. For example, the brand new “Buligun” is identical to the handgun, and the rifle that you can find is the same as the shotgun.

The biggest shakeup found in the prototype lies with how the map is handled. Rather than providing the entire map to the player, it instead appears blank, filling out as the player explores new rooms. This was likely to encourage players to clear out the levels rather than run past everything, but without any proof of greater level variety, this is a questionable choice. Some other tweaks to the mechanics were made as well, including significantly increased turning speed and the ability to see items on the map in discovered rooms, so it seems like some flaws of the original game would have been addressed.

https://www.unseen64.net/2009/10/30/beyond-zero-tolerance-mega-drive-genesis-cancelled/ – Information on Beyond Zero Tolerance