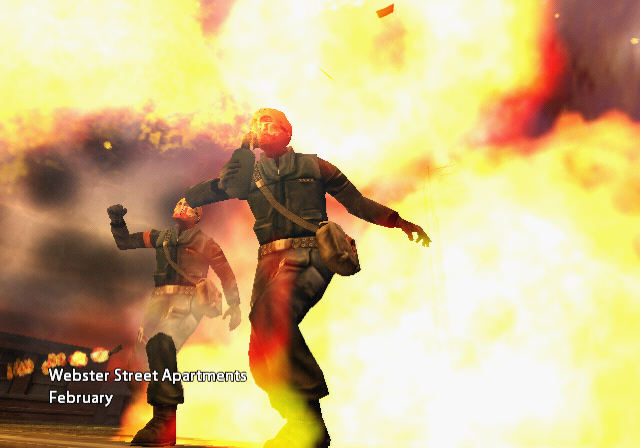 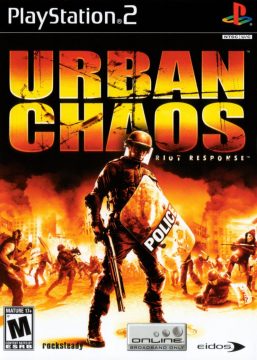 The sixth generation was bizarre. We were finally figuring out 3D and how old genres could excel in this new style, but the monolith franchises that rule the industry today weren’t fully built yet, leading to a massive flood of games trying to get whatever audience or niche they good by throwing anything and everything at the wall with a significant budget behind them. Genre crossing was just becoming a practice, and online gaming was finally becoming possible to sell to a wider audience besides RPG nerds on PC.

We saw a lot of weird stuff getting wide attention in those days, especially on the PS2, so only in this era would something like Urban Chaos: Riot Response ever happen and get sold as a serious competitor and not as a niche b-game. The fact this was the first game made by Rocksteady, the creators of the later Batman Arkham series, and also a sort-of reboot for a messy Tomb Raider rip from half a decade ago that tosses out the Satan wizard concept for mass hockey mask firebombing terrorism in a post 9/11 America makes it even stranger. Do not be fooled by the generic cover. Riot Response is freaking nuts. 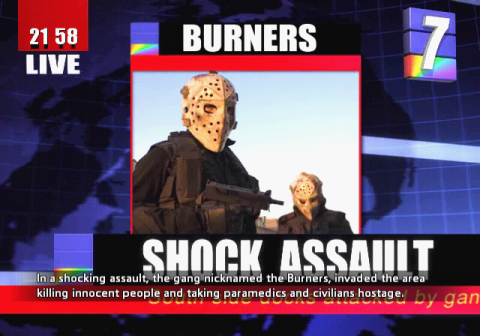 The moment you start the game, you are surprised with chaos, parody news broadcasts, and a surprisingly awesome rock theme song on the menu, which is covered in American flags and SWAT guys with guns, like an 80s satire flick mixed with a non-satire copganda flick. You are being informed you are not going to be playing a normal video game, and indeed you are not. The story here is that a group of USA based terrorists called the Burners are causing chaos all across an American city with arson and murder all over the place, and the T-Zero Riot Response Team have to deal with it. You play as Nick Mason, the team ace, and have to both fight the flaming mobs and save civilians for the sake of the city.

Despite the pretty standard presentation and world design, Riot Response has an absurd energy to it. Guns can get ridiculously powerful and leave bodies gory messes on the floor, the bad guys are cartoonish agents of chaos cosplaying as Jason Voorhees, tasers leave enemies tweaking like Tom after getting an anvil on his foot, and that doesn’t even get into the game’s big twist. Without giving away the game, Riot Response is like Robocop turned up to 11, a crass satire of the United States, capitalism, and the systems that keep it working, while also having a massive blind spot when it comes to its signature imagery and the idea of the hero of the people being a member of what’s usually the most openly corrupt portion of such a society. You can tell this was made by a primarily white studio in a post-9/11 world. 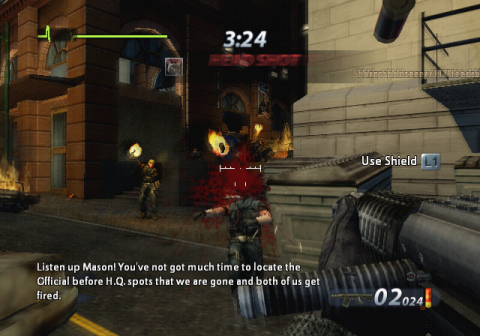 Everything is on fire, the environments are drenched in oranges and reds, and dark halls give some tension to firefights. Rocksteady’s later successes could be seen in the DNA here, with a strong understanding of satisfying mechanics working in tandem with each other and feeling at home in the world. The game’s most memorable addition is the riot shield, a defensive weapon that doubles as your melee attack. You bring it up, and not a lot can actually hurt you, while you can unleash a melee attack that can knock back enemies. What keeps it from breaking the difficulty is that the melee attack you can do with it is weak, you can’t fire when its up, and it gets smudged up by flames and gunfire. If it gets smudged up enough, you can’t see well, which can be a problem in areas filled with smoke or shadow.

Your other melee option is the taser, which lets you take in enemies alive by stunning them with it. It takes a second or two to do, though, and if you use it too long, their head will explode in a gory manner. A lot of secondary objectives that unlock medals and thus more weapons are to take in a certain number of enemies alive with the taser, so learning to use it is highly recommended. The rest of your arsenal are fairly standard guns that stick out for being far more powerful than you’d expect, one of the first new weapons you get being an absolute monster shotgun. Even the starting pistol remains useful through the whole campaign, and you can earn upgrades by accomplishing secondary objectives and earning medals in the process. You can also pick up weapons from fallen enemies, which can be useful, but mainly as a last resort if you run out of main weapon load-out ammo. 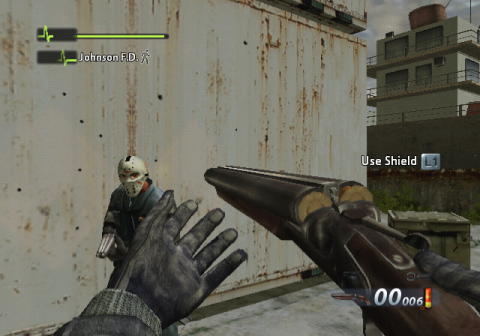 New weapons also get introduced in extra missions you unlock via medals, letting you get used to the new firepower and offering unique and shorter challenges, like a timed hostage rescue. Speaking of which, there are unique scenes in the game where you have to follow a Burner using someone as a hostage, the aim to be to take them out while saving the hostage, usually finding an opening at the end of the sequence where the hostage taker gets a particularly gruesome looking death. It gives the levels a bit of a breather from the usual battles, also accomplished by parts where you have to protect paramedics or get people to safety. In terms of the game’s greater narrative, though, these scenes are especially gross, as the narrative never really grapples with the full implications of your actions later. It makes the late-game twist feel tacked on and poorly thought out.

The police motif is mined for every possible mechanic, focused on making you feel well equipped for the fights ahead, occasional doing life rescue stuff firefighters usually handle. About the only mechanic that could have used some work is the thermal sensor, as it doubles as an air mask you have to use in areas covered in flame, made difficult by the heat vision you get obfuscating your sight and making it near impossible to make out basic shapes around you. 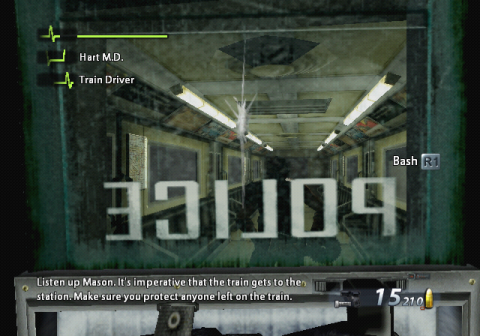 The name of the game is polish. It’s almost like the exact opposite of the original Urban Chaos, lacking that game’s creative ambition but makes up for it with polish all over the place. They even included slo-mo kill shots for extra impact, which you can skip if needed to get back in the heat of it (needless to say, another idea that aged about as well as Sylvester Stallone’s Cobra). The few new ideas introduced here, like hostage rescue and the riot shield, are handled with confidence. Riot Response is the sort of game that doesn’t have much of an identity of its own compared to the competition if you never reach that big story twist that somehow makes the game even more ridiculous than the one about a Satan wizard, but you can’t really say much bad about it mechanically. The game constantly nails everything it does in base design, and it wouldn’t be surprising to learn this game is what got Rocksteady the Batman license.

What is unfortunate is the lack of local multiplayer and co-op. Riot Response was made at a time when online gaming was becoming the next big gold rush, so a lot of games were made with online exclusive multiplayer elements. The campaign could have really benefited from some couch co-op shenanigans, but not having local multiplayer when you had online was truly bizarre. Said online mode was fairly basic deathmatch stuff, with a max of eight players at a time and teams based on the two main factions of the campaign (T-Zero and the Burners). It was basic but enjoyable, and by all accounts, well balanced. Burners made up for a lack of shield with stronger weapons, for example. There still seems to be people using the online play in small numbers, though you can also make use of the LAN network play included. 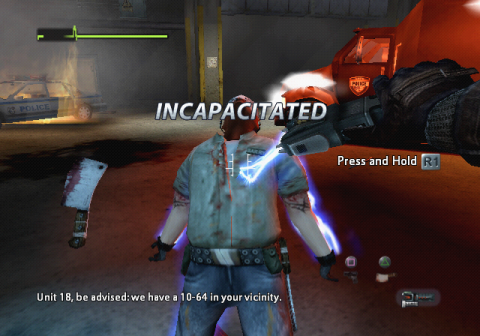 Where the original Urban Chaos was mainly a failure with interesting and ambitious ideas and aesthetics, Riot Response is simply a well designed game that doesn’t get too out there mechanically and refines everything it tries to do. Even its wackier elements are clearly taken from the usual inspirations, particularly 80s movies and overblown video game violence, until you hit that twist. Riot Response would have just been an interesting footnote in the history of Rocksteady, but the campaign’s big twist completely flips the concept on its head in a pretty wild way. As far as sixth gen shooters go, it’s hard to call Riot Response one of the best, but it’s still quite impressive.

The main issue with it in the modern day is that its theme and some of its political ideas were already questionable at the time, but are now almost impossible to contend with. Bush era post-9/11 cop media isn’t quite as bad in implications as more sincere ’80s copganda “cops should be allowed to kill because everyone is a serial killer” stuff, but it also was the first time we saw militarized police portrayed in a good light, which is now horrifying to modern eyes in a Black Lives Matter world.

Screenshots were taken from emulating the PS2 version. It’s a bit dark at times, but otherwise looks solid. The two versions are mostly identical, the only benefit of the Xbox version now defunct. Xbox Live made online play easier to set up, but these days, you’re better off setting up games yourself with friends and planning.