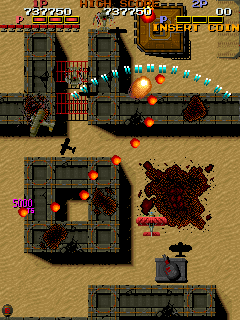 Fire Shark is the vastly improved sequel to Flying Shark. The most common complaint of Flying Shark was that your plane was too weak in its default state and takes too long to get powered up. This has been fixed, and then some. Taking a hint from Truxton, Fire Shark gives you a 3-way spread shot as your normal, weakest, attack. From there, your weapons get much stronger, so strong in fact, that it actually becomes somewhat unbalanced.

The quasi-World War II setting is pretty much identical to Flying Shark. Your plane flies over many exotic locales such as jungles, deserts, frozen landscapes, neon-encrusted cities, and deep valleys. Every so often, your plane flies over a generic enemy base, but most of the levels are pretty colorful for a realistic shooter. The bosses are the standard gigantic war machines or battleships, of course. 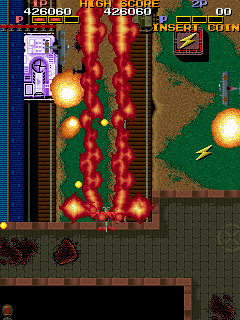 Where Fire Shark truly shines is the amount of power given to you. As usual, the weapons are colored coded – the default Blue spread, the Green piercing laser, and the Red flame-thrower, which of which can be upgraded. The fully powered-up Blue spread is terrifying attack usually reserved for bosses that covers half the screen in your bullets. That’s right, now your enemies are the ones dodging bullet curtains. The Green pierce shoots long, green shots in a diamond formation, but it lacks the horizontal width of the other weapons. Fully upgraded, it completely wrecks through the bosses.

By far the most impressive weapon is the red flame-thrower. In its weakest state, it starts off looking similar to the blue laser from Truxton until you power it up. Instead of gaining homing capabilities like the laser, the flame-thrower simply doubles in power and number of fire streams. At full power, the flame-throwers move and destroy everything in front, behind, and to the sides of your plane. This weapon makes short work of bosses and completely destroys any popcorn enemies before they can even come onscreen. Once you have this weapon, the only challenge left is dodging enemy bullets and the occasional tougher foe. 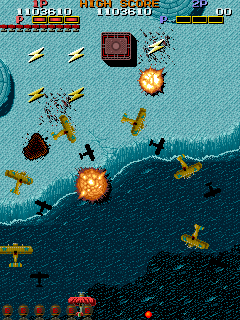 Fire Shark received a port to the Genesis shortly after it was released in arcades, developed by Toaplan themselves. The port adds a harder difficulty and stays very true to the arcade version. Unfortunately, the Genesis had problems processing so much action on screen at once, leading to immense amounts of flickering everywhere, as well as slowdown. This is particularly bad with the flame-thrower. Overall, it’s not bad, but there are much better shooters on the Genesis. The Japanese title is Same! Same! Same!, which means “Shark! Shark! Shark!”. This is mostly likely a reference to the classic World War II movie Tora! Tora! Tora! (“Tiger! Tiger! Tiger!”)

Like Twin Cobra, there are a few different versions of this game in the arcades. The initial Japanese release is only single player, and sends you back to a checkpoint if you die. Interestingly, if you take a hit, you can still moves around and shoot for a second while your plane flames out, though there’s nothing you can do to prevent your inevitable death. A revised two-player version removes the checkpoints, but also gets rid of these cool death scenes, so you explode immediately like every other shooter. The North American version is based on the two player release. 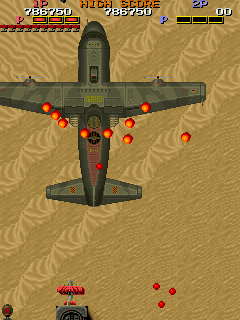 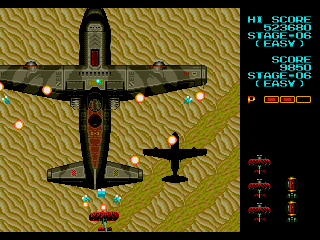