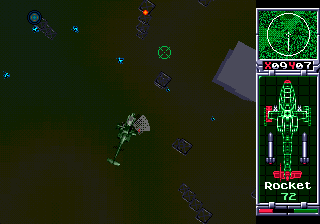 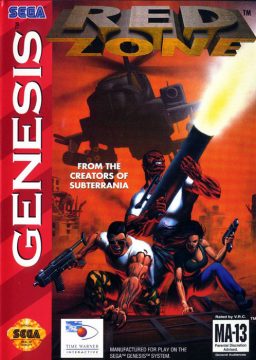 A country called Zyristan (ha ha, great joke, guys) has fallen victim to a military takeover lead by former colonel Ivan Retovitz, who as rumor has it, possesses huge nuclear weapons depots. The news agencies catch wind of this, and soon the UN gathers to discuss what should be done. Then, without warning, Zyristan invades a small country nearby, bombing villages without mercy and killing thousands of civilians. Retovitz issues a territorial claim on two more countries, giving his nuclear ultimatum to any country that dares to oppose him, allowing 24 hours to meet his demands or else meet nuclear terror. And so, the UN’s best military commanders decide to send in a single helicopter with one of three skilled pilots on what is called Operation Red Zone – the objective: disable Zyristan’s nuclear capabilities and lead a full-on infantry assault. 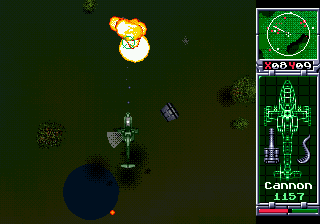 Red Zone is an insanely difficult game, but it’s very impressive. Piloting your chopper is much like in Electronic Arts’ popular Desert / Jungle / Urban Strike series, except instead of being an isometric perspective, the top-down camera actually rotates with your chopper, which not only looks insanely cool, but also makes it much easier to aim than in the Strike games. The intro even brags about all of the insane effects they’re implemented, in addition to the scaling and rotation, which were previously only thought possible on the SNES. There’s tons of pseudo-3D effects on things like trees, towers, and walls; and there’s even a form of full-motion video in the introduction and game over screens, which features angry dictators and all kinds of vehicles of war like tanks, submarines, jets and missiles. All of this fanciness comes with some compromises, naturally – most of the game is very visually sparse and incredibly dark, and the full motion videos comprises of single color shadows over a red background. But damn, is it impressive.

All fancy effects aside, your chopper is equipped with a minigun, Stinger missiles for airborne targets, Hellfire missiles for other targets, and Rockets for rapid-fire at pretty much anything. All of your ammo is limited, but you can land at specific points to repair and refit the chopper. The chopper’s damage level is represented as a graph in the lower right portion of the screen, but it’s not just to remind you that you’re a hit away from blowing up. Specific parts of your chopper will become damaged, so that weapons become unusable, and your chopper becomes more difficult to pilot – sometimes the rear rotor will be damaged, causing your chopper to spin in circles if left unchecked. Like Sub-Terrania, the missions are varied and interesting, but in this case, each mission takes place in the same general area, and where you land in one mission is exactly where you’ll start in the next. 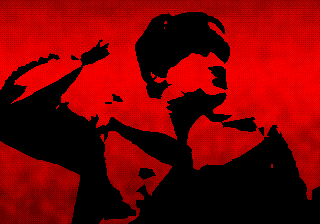 In addition to chopper combat, Red Zone also has a series of overhead on-foot stages. These are a little bit more straightforward, involving running through bunkers and killing soldiers, while being careful to prevent alarms. These portions of the game generally take a back-seat to the helicopter action, but they’re a welcome diversion. 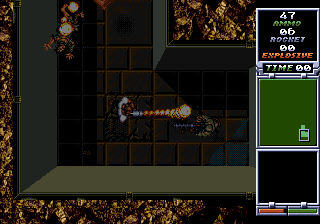 One thing about Red Zone, though, is that the difficulty level is absolutely lethal. You only get one life for your chopper (with no continues), and once it’s destroyed, nuclear winter takes place in a very chilling game over sequence. For the on-foot sequences, you can choose between three different soldiers with unique weapon loadouts, but if one dies, they’re gone for good and you’ll have to make do with the others. Thankfully, unlike Sub-Terrania, there is a password system that can be used to skip to specific missions. And then there’s the Jesper Kyd soundtrack, which is similar in style to his previous Sub-Terrania soundtrack, and is every bit as awesome. So while this is a monumentally impressive game from a technical standpoint, the difficulty will likely put off all but the most devoted players.