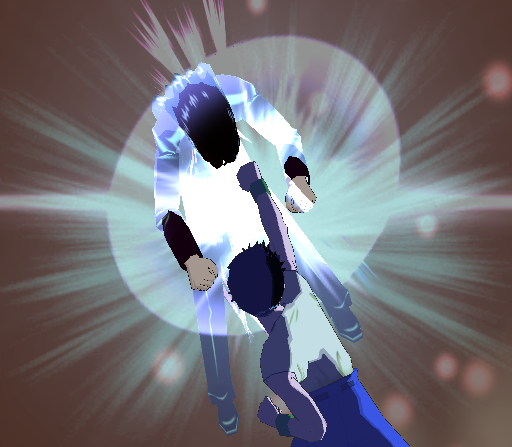 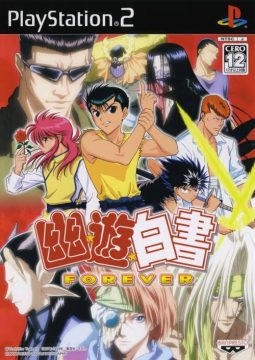 The first of two 3D fighters developed by Dimps, Yu Yu Hakusho Forever is fun, flashy and shallow, perhaps like the anime itself. The basic setup is simple; there’s a weak attack, a strong one, and a special move button, with a few variations of each triggered by combining them with different directions. There are no throws and no crouching, but certain moves can break an opponent’s guard, while combos can be broken with a knockback move at the cost of some Spirit Energy, which refills gradually. As you pull different moves, you charge your Emotion gauge, which, when full, can be used for two types of Supers. The first takes you to a separate screen where you input a series of buttons of your choice, and the opponent has a few seconds to then repeat the same inputs as they appear on-screen, QTE-style, to try and minimize the damage; the second, which requires that your health be low in addition to a full Emotion gauge, instantly kills the opponent. To trigger either type, however, you have to first touch the opponent with a special opening attack that cannot be blocked, but can be evaded, interrupted by a faster attack or countered with a knockback. 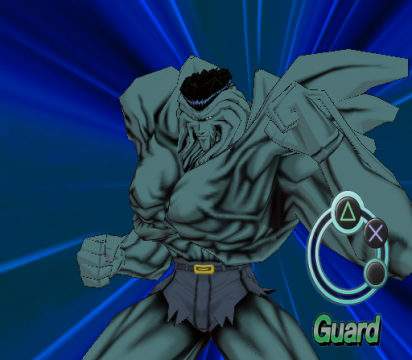 In any other circumstances, when a character health’s gauge is depleted, they have ten seconds to try and get back up with a partial refill by mashing buttons. Each successive knockout is harder to recuperate from; you might be able to get up twice, maybe even three times, but after that you’ve lost for good. The general flow of battle is fast and fluid, as you dash and combo all over the place; the combatants never even fall down unless hit with a Super or knocked out.

Like Dark Tournament, the game uses cell-shading, though there is more detail in the faces and the clothes, and the special moves, especially, are much, much more impressive. 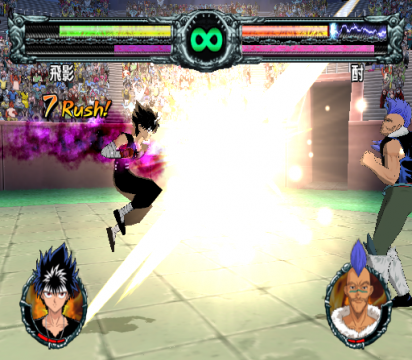 The story mode uses a mixture of anime clips and in-game conversations, allowing for variations in the storyline depending on who you play as. It begins with the Dark Tournament and moves on to three different versions of the Makai Unification saga, as seen by Yusuke, Hiei and Kurama, respectively. Sensui can also be unlocked through a 10-Man Challenge mode, rounding up the roster to 20. Jorge Saotome, Koenma’s long-suffering ogre assistant, actually gets to fight, and characters known for their alternate forms can transform during battle, opening up some new moves. Other modes include a 10-man survival mode where you earn points with which you can increase your character’s stats for VS mode. 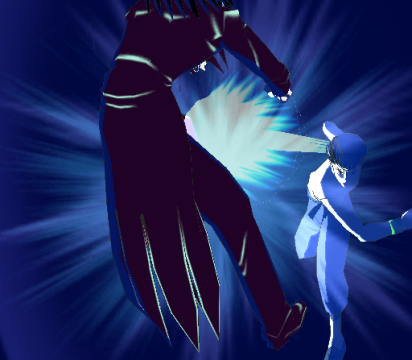 How flashy does this game get? 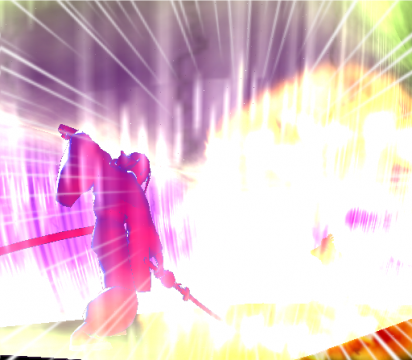 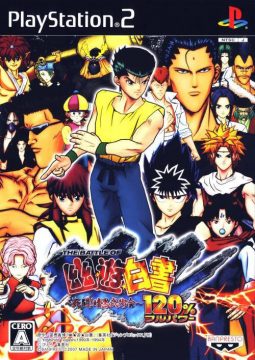 YYH Forever‘s arcade-based pendant substitutes technical depth for the flash of the former. It’s essentially a Virtua Fighter-clone with projectiles and special moves thrown in, though it doesn’t quite manage to replicate the physicality of its model, with characters and hits that feel light in comparison. The basics are the same; there are Punch, Kick and Block buttons, and high, mid, and low strikes; a standing guard blocks high and mid, while a crouch guard blocks low and dodges high. You can cancel most of your moves midway by blocking, including front and backdashes, and hit enemies when they’re down. For the first time, Yu Yu’s characters mostly use real-life martial arts, and those who don’t feel out of place, like free-floating Jin or the forever-obnoxious demon child Rinku and his stupid yo-yo. All characters can use their Spirit Energy to transform into an hyper state for a moment, from which an all-powerful Super can be performed as well as a few other extra moves. In general the game is swift, responsive, and balanced. 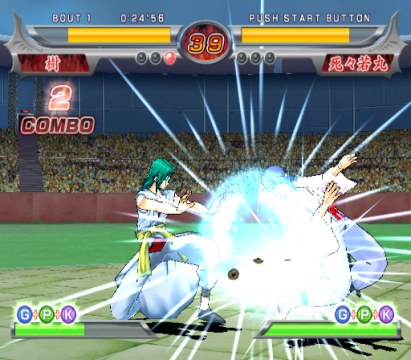 The original arcade version ran on Namco’s System 246 board, itself based on Playstation 2 technology, so the port was a no-brainer. It mostly adds some new play modes and a few gameplay tweaks, such as an airborne knockback move that can break a juggling combo at the cost of some Spirit Energy. The graphics are a step up from Forever during regular gameplay, but it doesn’t have the over-the-top pyrotechnics. Most of the roster is still from the Dark Tournament, though rather than the Makai tournament participants, it adds in some characters from the early sagas, down to the soul-eating ogre that constitutes Yusuke’s first real opponent. Non-fighting characters like Koenma (in his adult disguise) and Sensui’s close friend Itsuki are also present. Rumor has it that Koto, the catgirl referee and announcer during the major tournaments, was also playable in the arcade version, but she’s nowhere to be found on console. 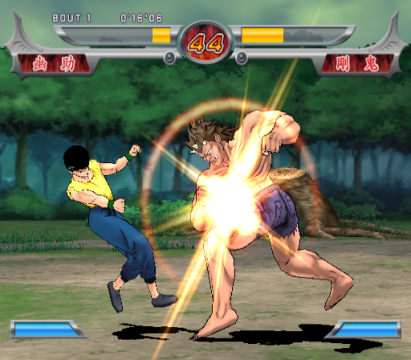 The story goes from the aforementioned fight against the ogre Gouki to the confrontation against Toguro 120%, overpowered but prone to leave openings, and uses anime clips like the other 3D fighters.

To date, The Battle is the last game in the franchise to be released for a home console. It’s a decent one, though it’s not quite the best. It would be nice to see a YYH fighter with characters from the entire saga at some point. 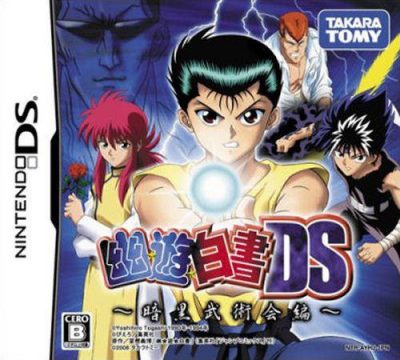 Like Spirit Detective, the DS release is an action-RPG with more action than RPG, though it is, unsurprisingly, a more professional one. The 2D graphics aren’t bad, and the battle system is fully-functional, with a good deal more depth; there are separate buttons for punches and kicks, dash attacks and special moves, all of which can be mixed in different ways to produce various combos. As is often the case with the DS, there are a number of mildly annoying mini-games involving the stylus, and the story once again recreates familiar scenes from the series. 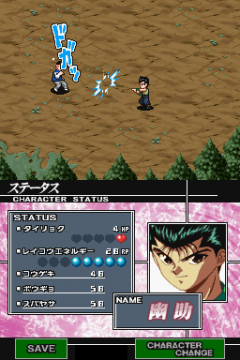 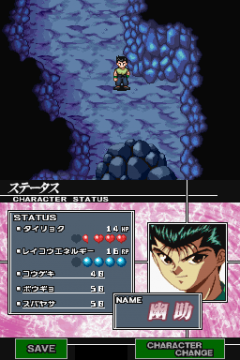 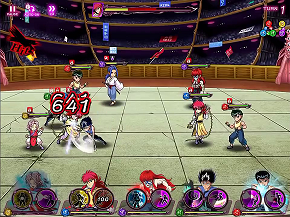 Having originally been published inside the pages of Weekly Shonen Jump, Yu Yu Hakusho has also been featured in its crossover arena fighters Jump Superstars (DS, 2005), Jump Ultimate Stars (DS, 2006) and J-Stars Victory Vs (PS3, PS4, PS Vita, 2014). Yusuke is playable in all three, Hiei in the latter two, and Kurama and Toguro in Ultimate and J-Stars, respectively. Each game also features a stage based on the series, and other characters – Kuwabara, Genkai, Botan – appear either as support or help characters. 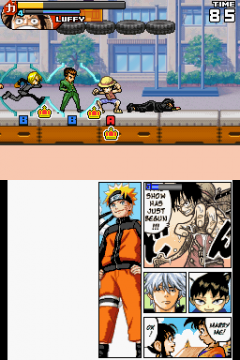 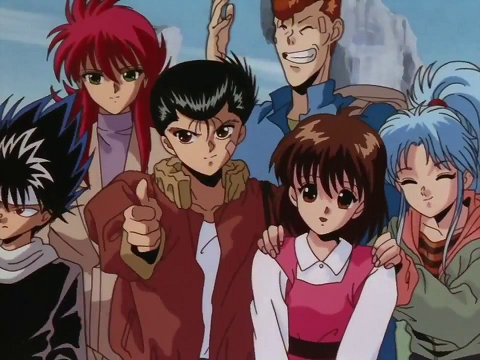 The end… for now.