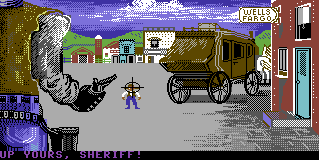 Ah, the dialogue tree. From Monkey Island to Mass Effect, it’s a simple tool that’s given players a lot more control over what their characters say and how they act. But where did it spawn from? It wasn’t from Maniac Mansion, since that game didn’t even have a “Talk” command. Some of Infocom’s text adventures let you ask people about certain subjects, which doesn’t really count. More than likely, it spawned from this game, one of the first games from Accolade.

In Law of the West, you control a nameless sheriff in a nameless town, sometime during the Wild West. All you have to do is survive a single day in your job until sunset. Given how trigger happy the people you’ll tend to meet are, this isn’t as easy as it sounds. There are a total of eleven characters you’ll encounter, along with a few gunfights as well. It’s not an especially long game, but given the nature of it, there’s a decent amount of room for replay value, especially if you’re going for the best scores.

Each encounter begins by a character walking onto the street in front of you, and then saying something to start off a conversation. From there, you get four different conversation options to pick from. From there, the conversation continues until the character leaves, or, if things aren’t going so well, if somebody gets shot. Conversations can go differently, depending on who you’re talking to, or how you talk to them. Every dialogue option gives you a different approach to the conversation, from friendly, to aggressive, to straight up asshole, to everything in between. Different characters usually require different approaches, so you’ll want to be nicer to the gentle schoolmarm than you are to the hired gun, for example. Picking the right dialogue options usually means the other character will leave peacefully. If you play your cards particularly well, you can get information about things like potential robberies, boosting your total score. You can even get yourself three different dates, if you’re not a total goon. 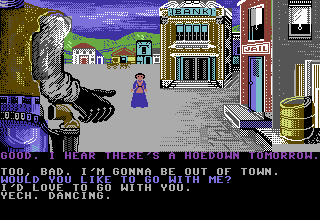 Besides the four “standard” conversation options, there’s also, technically, a fifth. By pressing up left on the joystick, you can draw your gun and fire it with the fire button. So if you ever get tired of dealing with somebody’s crap, feel free to draw your gun and shoot them right in the face. You won’t even get punished for it. Well, not right AWAY, at least. And yes, you’re free to begin and end every single conversation in the game with a headshot before each character even gets to say a single line. The people you shoot will complain about you being trigger happy, but the game certainly won’t stop you. You’ll end up with an absolutely abysmal score at the end of the game, though.

Some characters are more violent than others, however, and they’re much quicker to go for their gun. If things go badly enough, they’ll tell you to draw, and the conversation will end. They’ll go for their gun, and you should probably follow their lead. To win a gunfight, all you have to do is aim the crosshair over them and hit the fire button to drop them. Keep in mind, however, that they’re trying to hit you back at the same time, and while they have a chance of missing, they WILL hit you if you dilly dally with your pistol. Some characters will even fake you out by pretending to leave the screen, before popping back in to take a cheap shot at you, so don’t let go of your joystick too soon. Some characters, if you take the conversation a certain way, will tell you about robberies about to happen. When you find out about one of these, the next encounter will take you to a shootout scene where you’ll have to shoot a few robbers before they hit you first. Since these don’t involve any conversation, these parts aren’t quite as interesting, and serve more to boost your score.

Every time you take a hit, you black out, and the townspeople will call the doctor on you. What happens next depends on your conduct. If you’ve been doing well enough, the doctor will bandage you up for the next encounter. If you’ve been a jerk, he won’t even bother, and the game will end. If you’ve given him some money to get himself drunk with, you can figure out what happens. And if SOMEBODY happened to get tired of the doctor’s complaining while they were chatting with him, and if their gun just HAPPENED to slip and hit the doctor by “accident”; well, you can imagine how’d that go.

At the end of the game, either if you survive all eleven encounters or bite the dust beforehand, you’ll be given your final score. Your score increases by maintaining your authority, capturing crooks, and shooting down bad guys. You lose score by getting shot, letting robbers get away with crimes, and, obviously enough, shooting innocent people. There’s no real ending to the game besides seeing your final score, so most of the replay value comes from trying out the different conversation options and seeing how the characters react.

There’s a pretty wide variety of characters to talk to, each of which have their own thoughts on you and their own personalities. The doctor, for example, will complain about your habit of shooting people, which you can either respond to by telling him you prefer to avoid it, or, if you’re a jerk, agreeing with him entirely. On the other hand, you’ll also meet a guy carrying around his new shotgun, who you can make put it away if things go well, or have him try using it on you, if they don’t. There’s also a young child you can chat with, and yes, you’re free to shoot him right in the face. Take that, Bethseda.

For a Commodore 64 game from 1985, the game looks surprisingly good. The game itself takes place from a view just behind the sheriff, who’s pretty well drawn. The other characters don’t have as much detail put into them, although you can at least tell them apart by looking at them. The different backgrounds have a lot of detail to them, too, and you can even see people and stages moving around in the background. In a nice touch, as soon as a gun is drawn, the figures in the back will hightail it off the screen. Most of the characters also get their own unique musical theme, which helps them stand apart and gives a little hint into what you’ll be dealing with.

It’s a little hard to classify what exactly Law of the West is, and that’s part of what makes it interesting. It’s not entirely an adventure game, nor is it really an action game. The closest real classification one could put on it would be a very early visual novel, but not even that’s entirely right. Still, it’s an interesting concept, and it’s a shame it didn’t really get fleshed out more with any sequels. The Apple II and C64 versions are mostly identical in terms of gameplay, although the C64 version has the definite edge when it comes to graphics and sound. The Apple II has to use its internal beeper instead of the C64’s superior sound chip, so everything sounds like it’s coming from a PC speaker. With only four or so colors to use, the Apple version isn’t very pretty to look at, either.

Law of the West was one of the surprising number of Western computer games that had gotten ported to the Famicom, along with games like Wizardry and Spelunker. The translation is mostly the same, minus most of the Western slang that gets thrown around. The graphics, while they don’t look quite as good as the C64 original, do a decent attempt of porting the original look, as does the music. There’s also a few more changes made so that the game feels much more arcade like, which doesn’t really gel with the conversation-focused gameplay. For example, you’re under a time limit to finish each encounter, and occasionally random people will pop out behind something to try and shoot you, even in the middle of a conversation. There’s also more of a focus on score, too, with a score tally after every encounter. It’s a pretty weird port, overall, but at least it’s closer to the original game than something like Monty on the Run. It was also ported to the PC-88 by Pony Inc, while keeping the gameplay more faithful to than the Famicom version. The graphics are comparable to the Apple II version. 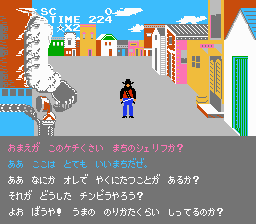