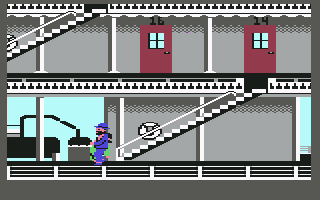 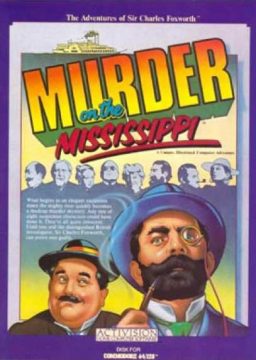 In Activision’s Murder on the Mississippi you control the Sherlock Holmes-esque detective Sir Charles Foxworth, who is sharing a peaceful boat ride from St. Louis to New Orleans with his dumpy pal Regis. Things go awry when a dead body turns up, and Sir Charles is honor bound to find the killer before the boat reaches its destination. There are seven other people on board, all of whom have potential motives, but only one is the true killer. The investigation involves questioning people, searching their rooms for evidence, and eventually building a case against the perpetrator. There are twenty four passenger rooms to explore on two decks of the ship, including the port and starboard side, as well as the captain’s location on the bridge and a few areas down in the engine room. It’s a small but contained game world. 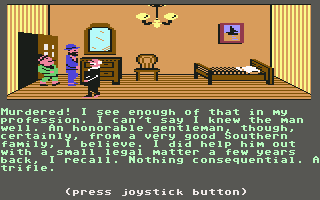 This relatively progressive game was one of the first adventures to avoid the text parser of Sierra games for something more intuitive. Charles is controlled with the joystick – press a button and a menu pops up with all possible commands. It’s quite friendly, but it stumbles due to other reasons. Controlling the characters is somewhat slow and clumsy, which isn’t a big deal. But when you’re searching through beds and dressers, it’s not always clear if you’re positioned properly, making it quite possible to miss valuable evidence. Certain rooms have traps which are impossible to avoid unless you know about them beforehand. The pitfall in Room 1, where a hole appears out of nowhere and drops Charles into an infinite darkness, looks particularly silly. 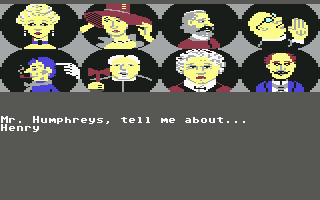 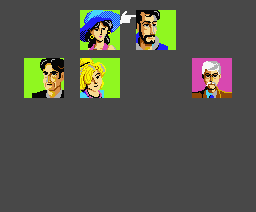 Character portraits in the Commodore 64 and MSX2 versions

But the most aggravating element is the way the game handles questioning. There are a lot of ways to communicate with the various people – you can ask them about the other passengers, about specific evidence, or even get them to follow you. But you also need to take down specific keywords in your in-game notebook, which are used for further questioning. And since characters won’t repeat themselves after being questioned, it leads to sticky situations where you can’t properly interrogate other people. For the most part these are the only real puzzles in the game, and they’re remarkably difficult to deduce unless you spend a lot of time in the save/load menu. Murder on the Mississippi is a fairly short game, and the writing is actually quite good compared to its contemporaries, but issues like these prevent it from becoming a real classic.

Murder on the Mississippi was initially released on the Commodore 64 and Apple II computers. Of these two, the Commodore 64 version is the best, as it’s more colorful, plus the sprites in the Apple II version are hilariously bad, with Regis looking like an obese woman in a muumuu. It was licensed by Jaleco and ported to the Nintendo Famicom and MSX2 computer under the name Mississippi Satsujin Jiken (“Mississippi Murder Case”), perhaps to capitalize on the success of the Famicom’s Portopia Renzoku Satsujin Jiken (“Portopia Serial Murder Case”) title, but was only released in Japan. The graphics are slightly better than the Commodore 64 version, although the scrolling is quite choppy. It changes the names of most of the passengers – for example, Regis is now known as Watson, if his inspiration wasn’t already clear. Some puzzles are changed and simplified too, as many doors are no longer locked, so you don’t need to fetch the worker to unlock them. Thankfully the interrogation system has been fixed so you only need to record whole testimonies instead of individual words, correcting one of the biggest aggravations of the original game, although they still won’t repeat them. Unfortunately, since the game’s entirely in Japanese, it’s pretty difficult to play without knowledge of the language. The MSX2 port, also by Jaleco, is similar to the Famicom version, but has more detailed graphics. 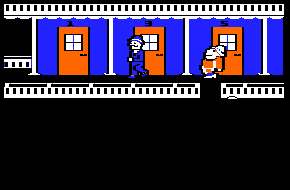 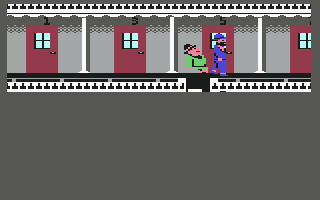 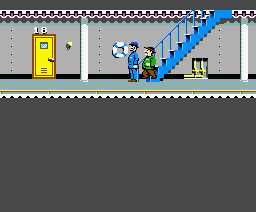 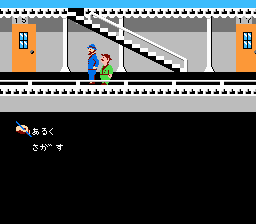