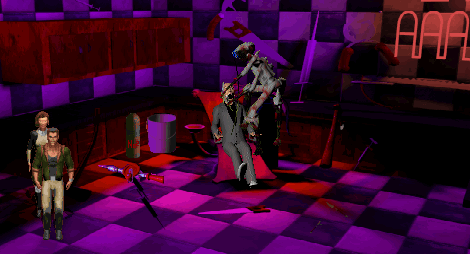 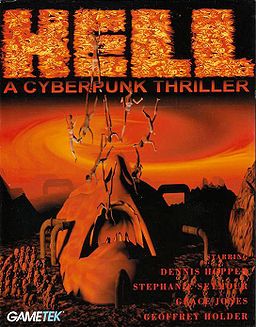 Hell: A Cyberpunk Thriller was the product of the burgeoning multimedia era in the mid-90s. PCs were finally infiltrating the homes of average families, and with it, game publishers sought the older, potentially more “sophisticated” gamer, the kind that wouldn’t normally be caught with a gaming console. Purportedly taking advantage of the expanded space of the CD-ROM, most of these attempts were filled with then-trendy computer graphics animation and/or C-list actors in live action video, all claiming to change the industry. Most of these adult-oriented products, like Sierra’s Phantasmagoria, were barely games, meant to demonstrate technology and little else. Gametek’s Hell is technically no different, rendered completely in CGI, although it has something many of these other games didn’t: a fairly detailed plot, a tremendously large script, and entirely peculiar game world.

The year is 2095, and the underworld has literally bled into the real world, with demons cohabitating with humans and controlling territories like mobsters. To combat this, the Hand of God is established, which outlaws practically everything fun. Gideon Ashanti and Rachel Braque are two officers of ARC, or Artificial Reality Containment, the division which represses technology and the sins it represents. They’re true believers in the Hand and its mission… that is, until a hit squad breaks into their house and attempts to assassinate them. Against all odds, the two escape, and begin an investigation as to why their former employer decided to terminate them. 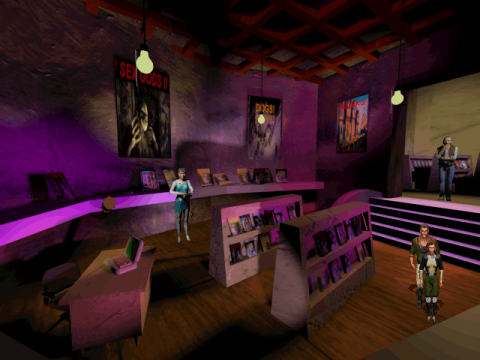 Hell is, to some extent, relatively open-ended. A map details which locations you can visit, although more are unlocked as you speak with various people. Most of the game is spent running subquests for various people, which slowly opens up more and more backstory regarding Gideon and Rachel’s supposed sins.

While potentially tedious, the game world is so bizarre that it remains strangely compelling. Oftentimes you’ll need to journey into the depths of hell to rescue some tortured souls. The journey to the realm of the damned is taken by way of a computerized device called a “psychopomp”, accompanied by the visage of random assembly language code. While technically a den of pain and suffering, the depictions of torture tend to be approached in a darkly cartoonish manner. In between gruesome tasks like rescuing a girl from a device which breaks her neck, only to have it instantly heal and continue ad infinitum, you’ll visit a demonic dentist’s office, a demonic zoo, a demonic schoolroom (where the puzzle solution involves state capitals), and a demonic porn studio. There are numerous demons dredged up from The Goetia: Belial, Asmodeus, Mephisto, Beelzebub, and of course, Satan himself, all as somewhat weird caricatures. Charon, the boatman of the River Styx, talks like a tour guide: 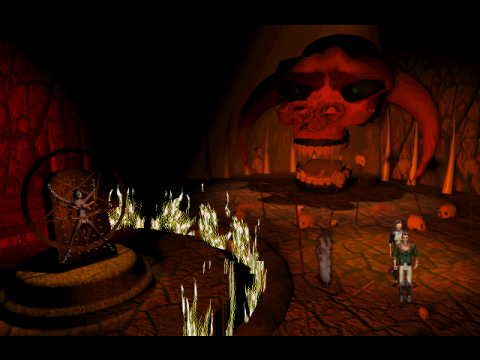 “Greetings! Welcome to Charon’s Boatrides along the scenic Styx. My name is Charon, and I’ll be your guide on this red-water rafting trip. Passengers are advised not to dip their hands into the river, or they will pull back a CHARRED STUMP. And beware of the spray, as it will dapple your complexion with searing lesions and, well, outright holes. As there is limited seating, passengers are further advised to cling to each other for dear life. We hope that you regret traveling with us today, that you suffer mercilessly during your stay, and that you come again.”

As should be evident, this is most certainly not a horror game, despite what the occasionally freakish visuals might suggest. It’s not quite funny enough to be a straight comedy, although it certainly has its moments.

Even sillier is a mission to investigate two street gangs – the Cleans and the Deadly 7. The Cleans are a group of do-gooders who strictly follow the Hand and its teachings – the Deadly 7 are the opposite, with each of its members representing one of the sins. It’s here where you need to hook up Drip, a geeky member of the Cleans, with Electric Sex, an absurdly over-the-top personification of Lust that pulls aside her top and flashes her bare breast at you every few seconds. This mission is accomplished by buying some pornographic comics and giving them to one of the Cleans, thereby allowing the star-crossed “lovers” to unite.

It’s a good thing Hell doesn’t take itself too seriously, because if it did, it would have been really, really terrible. The heroes aren’t exactly the most likable of the bunch, with Gideon acting like a frat boy meathead and Rachel acting like an irritated wife in a lousy sitcom. When they trade off with their good cop/bad cop routine, they have all of the charm of a bitter old married couple. The whole game takes place in Washington, D.C., because, get it? Politicians are evil! You can visit the Watergate hotel! There’s even a Deep Throat! That’s about as witty as the game gets, although the matter-of-fact manner in which the narrator relates how the Chiefs of Staff were sentenced to hell is curiously humorous. Also, if you feel that typing “hell” to start the game at the DOS command line is somehow offensive, you can type “heck” instead. 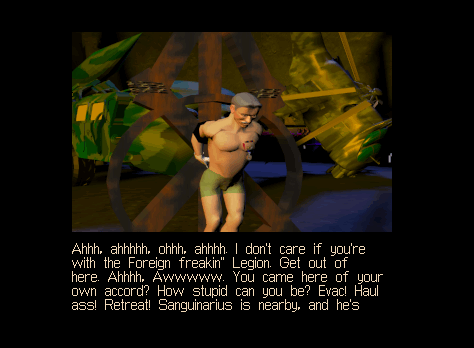 Still, the designers and writers were obviously in love with the game world, because the script is absolutely huge, to the point of excess. There are at least a few dozen characters, many with a disposition for aimless rambling and speaking with eccentric mannerisms. One security guard really, really loves barbeque ribs! The demons themselves are more mischievous than one would expect, often speaking in obtuse rhymes. 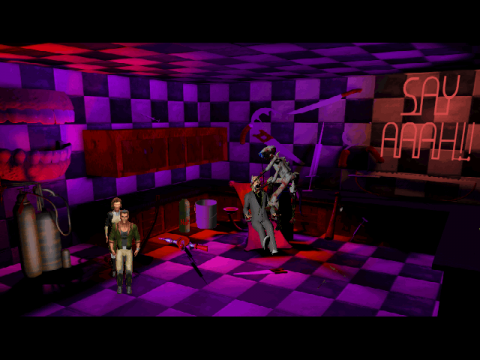 A huge chunk of the game is simply spent listening to conversations. All of the dialogue is accompanied by computer-rendered videos of the character speaking, although it’s just a short animation looped over and over until they finish speaking. Besides the narrator, whose genial tone is tremendously out of place, most of the voice acting is acceptable. The “big name stars”, as listed on the cover, include Dennis Hopper playing the role of a demon mafia lord named Mr. Beautiful; Stephanie Seymour as the hologram of Gideon’s dead ex-girlfriend; and Grace Jones as Solene Solux, the leader of the Hand. Most of the character models have aged badly, although the developers put a lot more effort into Hopper’s and Jones’ characters, making them look as close to the actors as possible. Seymour’s character is pretty curious, considering she’s one of the two live actors in the entire game. Not only is she out of place, but it’s hard to believe that the ex-Victoria’s Secret model could actually be a competent demolitions expert. The other live actor is Geoffrey Holder, who appears in video diary form as a government agent. 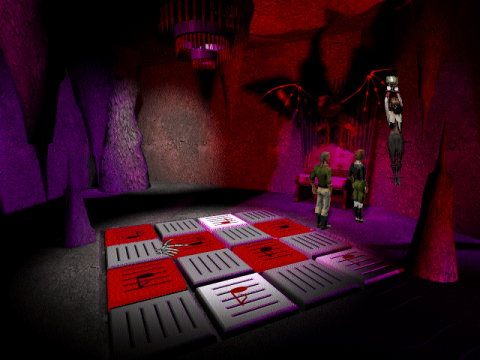 The story is really the primary focus of Hell – while technically a point-and-click adventure game, the actual puzzle solving is quite minimal. Items are sparse, and most tasks are accomplished simply by talking to different people. In one of your journeys to hell, you need to wage war on a demon. If you managed to pick up every weapon in the previous room – hey, you automatically won! Occasionally you’ll need to do a bit of light thinking to decode passwords. Not all of them are easy – some of the ones when rescuing various folks in hell can get rough – but their appearances are so inconsistent that it’s almost jarring when you actually need to do something beyond clicking around.

Right at the beginning of the game, you recruit three characters to tag along, including Seymour’s character, but other than some extremely rare interjections, they don’t do much of anything other than inhabiting the inventory screen, and it’s easy to completely forget that they exist. There is also a borderline impossible action sequence where you need to maneuver your character through a series of lasers, but finishing it only gives a clue in order to progress – it’s much more advisable to read a walkthrough and skip the whole mess entirely.

In order to make it a little bit more of a game and less of an interactive movie, you’re pressed to move with an invisible time limit. Take too long and Gideon and Rachel will be sentenced to hell forever. Some events won’t trigger until a certain amount of time has passed, requiring some dawdling until you can progress, assuming you’re ahead of schedule. The actual death scenes are relatively minimal compared to a Sierra game, but running out of time is not something you can prevent by saving and reloading – you need to begin from scratch. 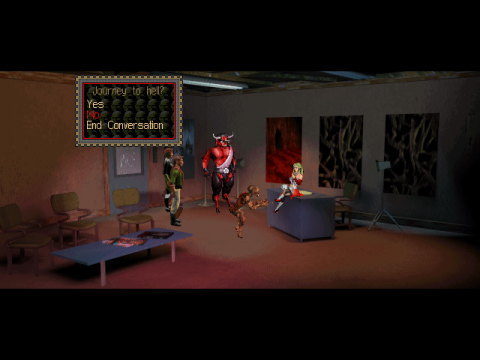 Hell’s storyline is not nearly smart enough to be satire, it’s far too convoluted for its own good, and its plot twists – what are the true secrets behind hell? – are largely transparent from the outset, even if the heroes are too naive or stupid to piece it together. And like so many titles that claim to be mature, it undermines itself by concentrating on cartoonish violence, naughty language, computer rendered nipples, and just enough references to demons to potentially piss off a bible thumper. The name and title screen are trying so desperately to shock and promote controversy, which was enough to garner it a bit of mainstream press back when it was released. The fact that it completely fell off the radar when Congress had already picked on far more innocuous games like Night Trap shows its lack of effectiveness. But its paradoxically light-hearted nature and bizarre, if kind of stupid, plot, make it something of an interesting curiosity.

In addition to the PC version, Hell was also released for the 3DO. While the PC version runs in SVGA, the 3DO version is stuck in a lower resolution, so most of the visuals aren’t quite as crisp. However, the dialogue portraits in the PC version are pretty small, not even a quarter of the screen in size. Here they’re larger and take up a substantial portion of the screen. There’s also a novel based on the game, which expands the plot even further.