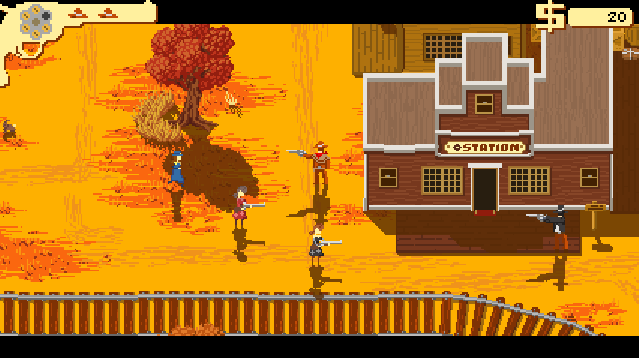 Westerado: Double Barreled is an expanded version of a free flash game found on [adult swim]’s website. The Cartoon Network affiliate started dipping their toes into the gaming market around 2010, and they’ve since become a popular publisher for many indie developers. They mostly publish experimental games, and Westerado fits well into that category by taking a bunch of familiar elements and putting them together in a surprisingly new context.

The game’s story cast you as a nice guy dressed in red hat and poncho, and you start off your day helping your family herd some buffalo. After chasing down one that got loose for an entire day, you return only to find your mother dead and your brother dying as your house is burning to the ground. As is par for the course, you immediately set out to enact revenge on whoever did this. Along the way, you discover various different stories in tangent to yours, such as the US Union army fighting against a group of Native Americans, or an oil tycoon spreading out his influence in small towns. 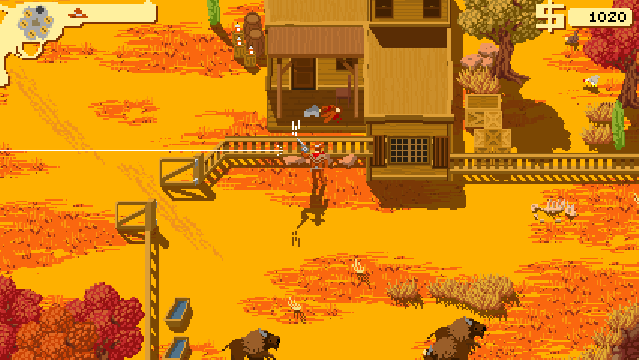 The game looks exactly like you’d expect a pixel style western to look. There are tons of yellows, reds, and oranges, creating harsh sands and worn out homes. Every NPC dresses as the era dictates, including every man having a hat with a notable brim on his head. All sorts of wildlife hangs out in the desert and the forest, from coyotes to scorpions, which love to hide in the sand and strike when you least expect it. Old school oil towers spread across the oil tycoon’s land, and rovers can be found dry and barren. The entire world feels alive and ridiculously detailed for such a short game. There’s even an entire second world in the mines, a twisting labyrinth that houses all sorts of secrets to discover. The music is equally fitting, with a ton of twangy guitar and worn out wind instruments. It really captures the sound of old spaghetti westerns.

The game plays like a mixture of RPG and top-down action. You talk to NPCs and do odd jobs for them to get closer to your family’s murderer, and you’re commonly rewarded with money that you can use to gain new weapons, buy hats and open more paths. The world is surprisingly expansive, with a lot to uncover (and thankfully backed by a useful fast travel system via horses in the towns). There’s always something interesting hidden away, even in the mostly empty mines, which house one of the best easter eggs you’ll possibly ever see in any game.

Combat is completely real time action, as you have to draw your gun, cock it, and fire it left or right at whatever person is threatening you, while keeping in mind to get out of line of sight to avoid getting hit. You get a maximum of three hats to protect you from a hit, but if you’re shot without a hat, it’s all over. You can also shoot any character in the game if you want (there are even achievements for that). Granted, that makes it a bit harder to progress, but it is possible, and it unlocks one of the most bananas endings ever. There’s also the option to draw your gun during dialog, like tense stand-offs in old spaghetti westerns. 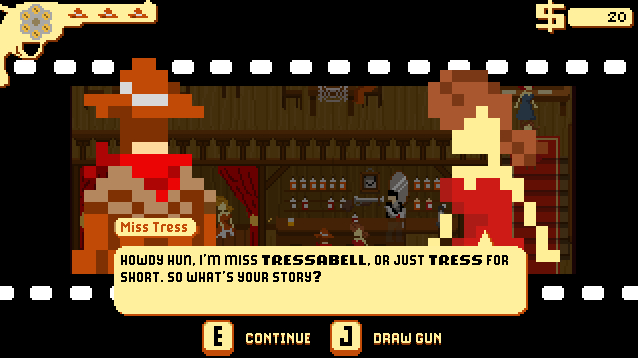 The game is made for multiple playthroughs, as the identity of the murderer changes every time you play. A good round of the game can last about three hours or so, but you’ll hardly get to see and do everything in that time. You can also unlock new characters to play as, and experience new endings. The world also changes based on your actions in certain quests. You could play this game for hours upon hours and still not see everything.

The final battle with the murderer is a short gauntlet of challenges and gunfights, ending with a multi-part showdown that ends with a wide variety of possible outcomes, ranging from a Fight Club style twist to a complete genre shift. Every ending feels like a mixture of thematically appropriate and hilariously absurd to different degrees, and they all radically change the revelations based on who you interacted with or sided with most, making replays encouraged just to see what wild new thing will happen at the end with a different play style. 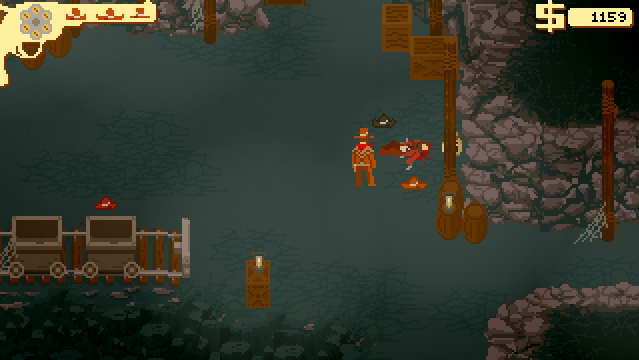 The only section where the game feels like it’s dragging is in the mines. Outside a few outlaws to fight and a side quest here and there, the mines don’t have much going for them compared to the rest of the world. They’re the dullest areas, and there isn’t nearly enough stuff to find down there to justify their large size. It couldn’t have hurt to have a bit more added to them, like some more treasures to find, but as they are, they’re mostly a long drag of nothing. They feel like an overly long dungeon in a WRPG, but with less to actually do.

Westerado: Double Barreled gets a lot of things right and tries to capture the genre as perfectly as possible, to an extend that has rarely been done before. It’s a violent, harsh world, where death is not only common, but expected. The writing has a good few funny lines, but never quite at laugh out loud levels, and some unexpected gut punches that can leave you with some memorable last moments. It’s not just cosmetic styling, but a fully realized western adventure. That’s certainly an impressive feat, and it gives the game a special place in western themed game history.