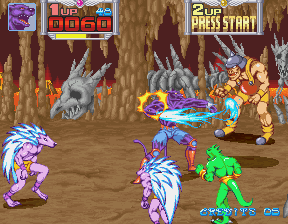 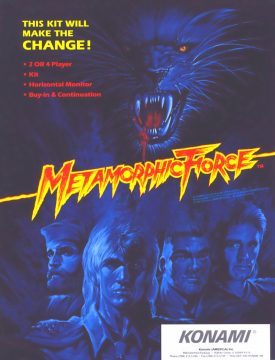 As the ’90s rolled on, Konami didn’t rely solely on licenses to bring out arcade games. Along with games like Sunset Riders and Mystic Warriors, Metamorphic Force is a game that has all the goofiness and color of your average Saturday morning cartoon. In fact, it’s hard not to feel like it’s not based off of some failed pilot that only Konami knew about. It’s pretty good, as far as ranking the game against Konami’s many other attempts at the genre go. The lack of a strong license means it’s not quite as memorable, but as a game, it’s leagues beyond X-Men.

See if this plot sounds familiar: A Grecian deity, concerned about some evil guy using an army of monsters to do bad things, reincarnates muscular men that have the power to transform into bestial forms. (In fairness, however, Metamorphic Force is a far better game than Altered Beast.) In this case, however, you’re sent out by Athena in the year 199X to defeat “The Evil King”. In the usual Konami style, you’ve got four selectable characters, none of which differ all too much aside from their animations. Claude’s a swordfighter who can turn into a werewolf, Ivan carries around a huge log and becomes a bear, Max turns into a panther, and Ban’s a martial artist who turns into a werebull. You’ll probably want to pick Ban, since he can do wrestling moves on enemies when he’s in bull form, thus making him superior to everyone.

In terms of basic gameplay, most of Metamorphic Force isn’t too far off from Konami’s usual licensed beat-em-ups. The ability to hit enemies who are on the ground returns from X-Men and Vendetta, and it’s just as handy here, as well. You’ve also got a special attack in Final Fight fashion that hits multiple enemies at the cost of some health. The biggest new wrinkle are the wandering cat people holding sacks, very much in the style of Golden Axe. Smacking them will make them drop statues of Athena, and picking these up will have your character go into their beast form. When you’re in beast form, you move faster, jump higher, generally do more damage, and can grab and attack enemies by walking into them, Final Fight style.

As you might imagine, beast mode is a lot better than your wimpy human form, but taking damage will reduce a meter underneath your health. Once it runs out, you’ll turn back to human until you find another statue. Picking up a statue while you’re already beasted out hits every enemy on the screen in a blaze of color, so they’re generally always worth grabbing when you see one. The whole beast gimmick doesn’t really add too much strategy to things, since there’s never any point you don’t want to be in beast form. It does, however, keep the game interesting and adds a lot of nice visual spectacle, so it works out. 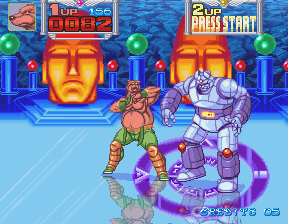 Metamorphic Force is generally a much more interesting game than X-Men. It’s probably because it does what most Konami brawlers usually do well. Compared to the somewhat mediocre X-Men, the game generally feels a lot faster, the pacing never makes you feel like you’re spending too long in one particular area, and there’s so much of that spectacle that makes playing these games all worth it. Having four werebeasts tearing around the screen, stomping on enemies blazing around the screen is always a bit hectic to watch, but it’s definitely pretty thrilling to watch. You move through the stages at a pretty fast clip, too, which keeps the game from getting old too quickly, like statues that shoot lasers while you fight around them.

The game itself looks pretty good, and the animation’s actually somewhat smoother than most of Konami’s brawlers. Given that and how bright, almost pastel, most of the colors are, the whole thing has the feeling of some sort of long forgotten ’80s cartoon. It’s hard to say where that sort of feeling comes from, though. Maybe it’s the game’s generally goofy concept, maybe it’s something about beating your way through hordes of brightly colored monsters, mostly made up of things like lizardmen and trolls. It definitely shows something’s been rubbing off on Konami through all those licensed brawlers, though, and it makes the game pretty visually unique. There’s also a few points where the game throws in some hardware tricks just to look fancy, like floors of ice that reflect what’s under them, or a coliseum background that rotates as you move in the boss rush stage.

The music is pretty great, too, with a lot of the soundtrack using synth guitars and trumpets. It’s an unusual combination, but it does a good job of making you want to go forth and beat the crap out of monsters. There’s also plenty of voice acting, but it all ends up sounding pretty silly. Not quite as bad as X-Men got, but it’s obvious Konami only hired about two or three voice actors, and some of the lines are pretty silly. Take the first boss, who teleports in and tells you “I won’t let anyone get in this area!” Much like The Blob and his proclamation that nothing moves him, you’ll most likely proceed to get in said boss’s area a few moments later. The voice acting just adds to the cheesy, cartoon-like nature of the game, though, so it’s definitely forgivable.

Overall, Metamorphic Force isn’t quite up to the lofty standards set up by Konami’s best work, but it’s still definitely worth playing if you have a few friends around. Even without the license, it’s a ton of fun, even if you shouldn’t expect anything especially deep or involved. 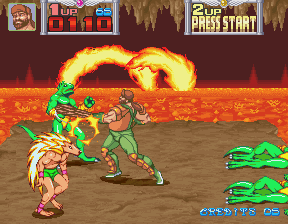