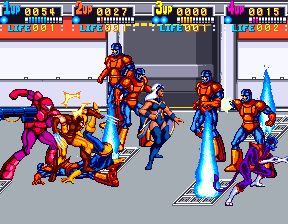 Not all of Konami’s games could be zingers, as Crime Fighters proved. Even their licensed beat-em-ups, which included such top acts like Teenage Mutant Ninja Turtles, had a mistake in there somewhere. It’s hard to say for sure what exactly happened with X-Men, but something about the entire thing feels rushed and sloppy. Especially since games like The Simpsons, which came out an entire year before it, manage to outclass it so well. For one thing, for whatever reason, the game isn’t based on the popular 1992 cartoon, which Capcom would use to go on and make some great games. Instead, it’s based on Pryde of the X-Men, an earlier, failed TV pilot that nobody remembers.

For what’s likely this reason, the game just feels heavily rushed, and most of the budget must have went to the game’s six-player feature. Similar to Taito games like Darius II and Warrior Blade, some cabinets feature two CRTs next to each other, to create a super wide playing area, with a large size cabinet to make room for six sets of controls. To be fair, having a whole six players at once at one machine is pretty impressive, but the game just isn’t really good enough to make it all worth it. Cyclops, Colossus, Wolverine, Storm, Nightcralwer, and the somewhat obscure pick Dazzler make up the roster, out to beat up Magneto and his league of evil mutants. 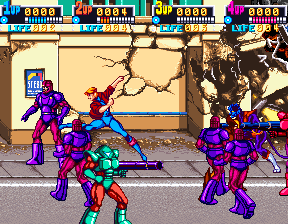 X-Men is basically what you’ve come from to expect from your usual Konami brawler. You get one button for attacking, one for jumping, and a slightly stronger attack done by hitting both buttons at once. What’s new is that you can attack prone enemies, Vendetta-style, by hitting the attack button near them. Every character also gets a unique “mutant power”, which is generally a powerful attack that hits a lot of enemies at once. Using these will drain your health, or your special stock that you get from beating stages and continuing if you don’t have enough. These are generally rare enough you’ll want to save them, as they’re pretty useful.

It’s difficult to not compare this game with any of Konami’s other licensed brawlers, as this game doesn’t really do anything new or interesting. In a lot of ways, it feels like a step backwards from games like The Simpsons, which makes it all the more depressing that came out a year later. It’s not that it’s a bad game at all. The pacing isn’t too bad, the hit detection is pretty solid, and it doesn’t feel much more difficult or unfair than most other Konami brawlers. The real issue is just that, once you get past the whole six player gimmick, it just feels like something’s missing. The whole problem, really, is that it just feels like none of the usual love and effort Konami gave their brawlers really shows through here. 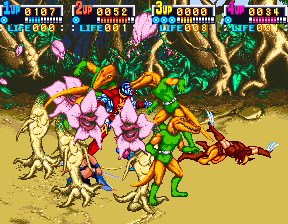 The game feels much older than something that came out in 1992. There aren’t any weapons laying around to use on enemies, no real easter eggs or interesting sights to speak of, and there aren’t even as many environmental hazards as Teenage Mutant Ninja Turtles to keep things interesting. Even mechanically, the TMNT games let you throw enemies at the screen, or The Simpsons let you combine different characters to perform unique attacks, but there’s nothing like that here. Sure, there are things like jets of flame or a wall that pops up and shoots out lasers, but that’s about it. The game never really does anything with its own gameplay that hasn’t been done before, and better, in Konami’s older beat-em-ups, and despite the decent visuals, it just lacks the same energy.

The lack of effort shows through the game’s entire general presentation. For example, we’re all well aware of Magneto’s infamous line when he appears to send the cliff you’re on plummeting to the ground, “X-Men! Welcome to die!”. The question is, how did something like that crop up in the first place? Most other Konami brawlers never had any localization issues like that, making the Engrish here all the more jarring. Even something like Teenage Mutant Ninja Turtles, which came out a full three years before, felt like it had far more care put into the license than a single stage of X-Men.

While the bosses are at least part of X-Men‘s usual rogues gallery, most of the enemies you fight are generally tiny Sentinels and, for some reason, crocodile men. Most of the levels themselves are about as generic, ranging from things like caves, jungles, and nondescript factories. At least the sprites themselves are pretty decent, and there’s a pretty nice touch where the Sentinels you kill blow up into pieces, which makes killing them a lot more fun. The music’s generally so generic it’s hard to even notice, although the game seems to have a thing for making up songs by scatting the words “X-Men” a lot. 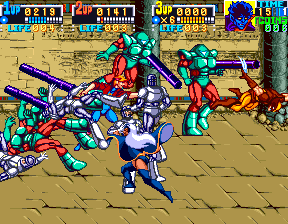 Overall, X-Men isn’t really a bad game, and it’s still a ton of fun in multiplayer. But there’s so many better brawlers from Konami. It’s hard to say what the development history was like, but it’s hard not to feel like there was some severe rushing going on… especially since Pryde of the X-Men aired in 1989, three years before the game actually came out.

Like many Konami arcade games, there are some tweaks between territories. The European and Japanese versions are a bit easier, given that your super attacks drain your extra stocks before they consume your health, so you can use them more easily. There are also extra power-ups to replenish your stock or increase depleted health. Some enemies have lower HP, though a number of areas have been cut down to make them shorter, for some reason.

While the game never saw a release on the consoles of the time, it would eventually get a release to XBLA and PSN. This is a pretty fancy rerelease, as well, with online play capable of supporting a full six players (though local is limited to four), as well as the usual extras like achievements and leaderboards. HDTVs make a pretty good replacement for the ultra wide display too. You can also choose to play the American or Japanese versions. Alas, all the voice acting has been re-recorded entirely, although the goofy lines themselves have been unchanged. This is a consistent issue with Konami games due to the contracts they signed when the games were originally created. Sadly, however, since the Marvel license ran out, the game is no longer available for purchase on the digital storefront.

Scott Pilgrim vs. The World: The Game