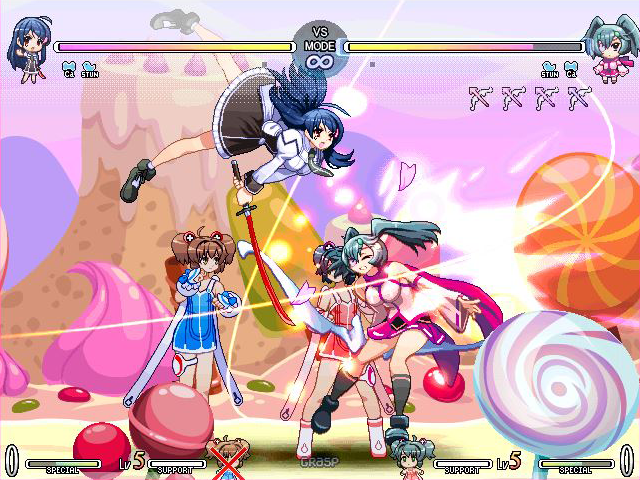 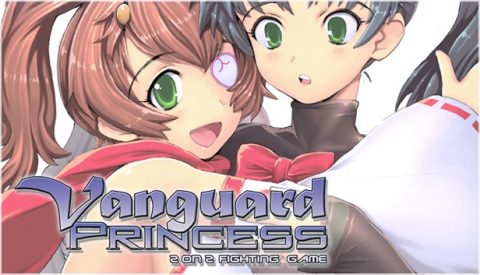 In 2009, former Capcom and SNK sprite artist Tomoaki Sugeno, known online as Suge9, released a new fighting game made in Fighter Maker 2nd called Vanguard Princess. After spending a career doing work on the likes of the King of Fighters series, Suge9 sought to branch out into his own project, coming up with an all women roster fighting game with a Guilty Gear aesthetic to it, though less rock and more “…ecchi.” Despite the similarities the concept has to the much more popular Arcana Heart series, Vanguard Princess is a very different beast. 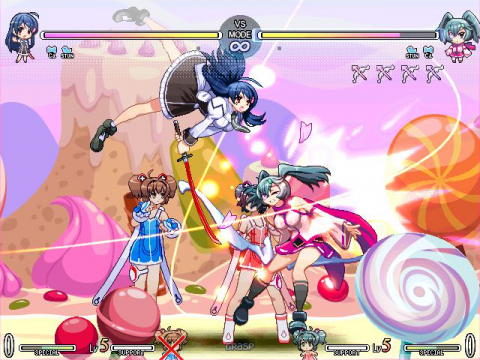 The game is set in a very vaguely defined Earth, where a girl awakened to powerful magical abilities and was captured by “the government” for the sake of researching said powers for possible new human weapons. This backfired. The girl disappeared and awakened similar powers in various other girls around the world, then reappeared with the intent to wipe out all of humanity. Various girls set out to stop the great evil, or they just trip up into it by happenstance or sheer blissful ignorance.

Yui Kutuna – The owner of the legendary Sakuya Sword and heir to the Kutsuna-Musou style, Yui enters the fight to find her sister Haruka. Her heavy attack covers a lot of area, and she has a simple set of specials to work with, making her beginner friendly. Can also use petals that appear after some of her attacks as projectiles.

Haruka Kutuna – Yui’s missing sister, who left home under mysterious circumstances and is trying to rescue an old friend. She’s a mage who can use spells, projectiles, and magical shields, letting her control space.

Lilith – A DLC character. Lilith is the headmistress of an all girls school and starts fighting to prove to them that she truly is the daughter of Satan himself. Despite her small size, she’s actually the grappler of the game.

Luna Himeki – A former special forces soldier, Luna now works as a bounty hunter and is chasing after a big bounty. She has a weird gun-fu style heavy on stances and projectiles. She’s also the game’s fanservice character, going as far to only wear a heart pasty instead of panties. Really.

Kurumi Mirumati – Another DLC character. Kurumi lost her memories in a plane crash, but remains constantly optimistic. She also has strange powers unlike anyone else in the cast. Her normals and specials are weak and limited, but she has special moves she can use with the four main assist characters, including the strongest supers in the game.

Saki Mitonoya – Wielder of the Hitohira Sword, plus a kendo captain and student council president. She wants to fight Yui to test her skills and blade (which is based on the Sakuya Sword). She’s well rounded like Yui, but she trades attack range for speed and a teleport move. Also shares her petal attack.

Kaede Hioh – A mysterious assassin with unknown past and motives. She fights with quick and strong attacks and a wall bounce. However, she builds assist meter slowly.

Natalia Glinka – An intelligence agent of an unknown country, though her Christian theme suggests it’s probably a Catholic one. She’s looking into disappearances caused by a new super weapon. She hits hard and fast, but has a predictable moveset. Also, she has multiple leaping butt attacks, which even function as anti-air moves.

Eri Hasumi – Despite the tennis/volleyball theme, Eri is actually a super soldier experiment who’s breaking from government control for her own freedom. She’s one of the most aggressive characters, good at applying pressure and poking. She also has a sort of combo dance move with multiple variants.

Ayane Ikuse – An one-eyed archer who’s losing her powers from the Astral Impact event that caused the events of the game. Before that, she wants to beat her rival Yui in battle. Needless to say, she can fight with arrows, letting her control space and punish offensive players.

Hilda Rize – The main antagonist, made playable as DLC. She caused the Astral Impact and wants revenge on the world. Her moveset is entirely projectile and trap focused, with no significant up close options. Nobody else in the game can punish and control space like her, but she’s weak up close. She also has her own special assist characters.

Kanae – One of the assist characters. She’s a magical girl who can summon strange creatures and drop objects on people.

Sierra – Another assist, she can use strong projectiles, making her useful for characters lacking many ranged options.

Eko – An assist character with some basic fighting moves that can help apply pressure. She also has a magic kiss blow that paralyzes an enemy briefly.

Juliet – The, uh, most questionable of the assist characters for obvious reasons. Despite her slow ball and chain moves, they take up a lot of space and can scare opponents off or add to long combos.

Hilda Rize (Support) – The kid version of Hilda, usable as an assist, though unable to give Kurumi any special powers. She combines a few of Hilda’s moves with Hilda’s special assist characters.

As you may have noticed, the game uses assist characters, not unlike Capcom’s older Vs games. The twist is that these characters follow you around on the field, so you have to watch where they are on the screen to know when best to use their skills. They also have multiple moves that change depending on what direction you’ve input along with the assist button. Each character fits the ladies of the main roster differently, and can significantly change strategies and options in a match. Sierra is good for projectile back-up, Eko is good with aggressive melee fighters, Juliet can punish and assist with combos, and Kanae creates useful traps. Hilda has a little of everyone’s style, making her the most well rounded over all, though surprisingly the least useful. 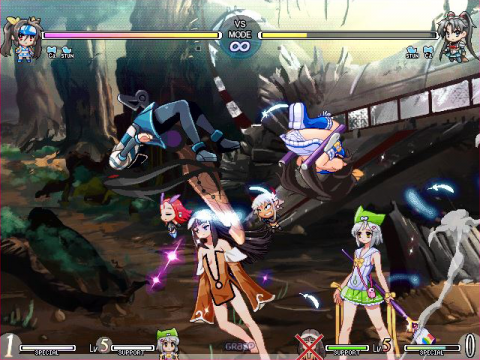 As for the mechanics, they’re all basic and easy to learn. Inputs are very Street Fighter II, down to hadouken motions, so the game ends up being very beginner friendly …kind of. The Hilda fight at the end of story mode basically ruins that with the proud tradition of obnoxiously overpowered fighting game bosses, tossing out an enemy that spams the field with endless projectile attacks. While the Japanese version had a fairly dumb AI for her, the English release decides to “fix” this and make her one of the toughest fighting game bosses in history, close to some of the worst in SNK history. There’s also a lack of online play, as development ended before that could be implemented. There is local, though, and a neat team battle mode in single player that has you fight two characters at once.

The game is generally well balanced and a lot of fun, lack of modes aside, and its damn pretty to just watch. For a game made by one man, Vanguard Princess is downright gorgeous, with short anime style cutscenes before a super activates, and a ton of detail on sprite designs. It’s fast and flowing to boot, only failing to live up to the standards of Arc Systems Works due to a lack of HD graphics. However, the sprite work is pure art in motion and almost even more appealing at moments. Surprisingly, the titty and ass stuff you’d expect to be all over this game is mostly limited to Luna (Gainax bouncing), Natalia (butt slam and no pants), and Kurumi (endless panty shots), or it comes by so fast that you don’t have the time to register it. The fact the English version needed DLC for the fanservice stuff is kind of odd, because there’s not nearly as much as you’d expect from its reputation. Though, to be fair, Luna REALLY adds a lot in there (seriously, why is she wearing a heart pasty instead of underwear). 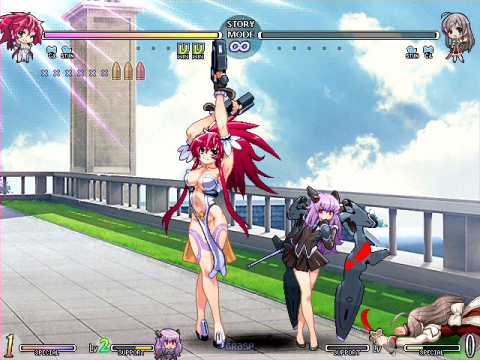 The game is inexpensive and well worth a look, even if the DLC characters add some extra cash to the price tag. It’s well put together and a great example of fighting game fundamentals, with a style and flow all its own. The fact that this was made on Fighter Maker 2nd is honestly shocking. Beginners can find a game that’s easy to learn with, and experts can enjoy a neat niche title with a great deal of polish.