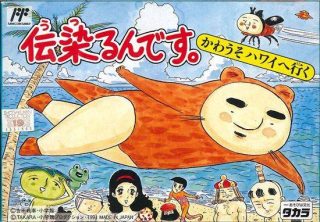 Utsurun Desu. was a gag manga running for about a decade, from 1984 to 1994. As one of those silly four panel comics, its shtick revolved more or less around total nonsense, but it’s been popular enough for it to be referenced in tons of anime and manga since. Takara released a Famicom game based on the property in 1991, and keeping in the spirit of the comic, it’s simultaneously random and absurd. You control Kawauso, an otter-thing, as he attempts to take a trip to Hawaii. He quickly ends up getting sidetracked, eventually ending up in all sorts of places that aren’t Hawaii, including the South Pole, the Amazon jungle, and Pluto.

When you first boot it up, you’re presented with an off-frame title screen, suggesting that there’s something wrong with the cartridge. But no – it’s just a fake. Once you actually begin the game, you’re presented with a pit of spikes that looks far too large to jump over. That is, until you take a leap of faith and realize that you can actually walk on the mountains in the background. On the next screen, an arrow points straight into an impassable wall. In many ways, it’s the predecessor to Sega’s 2009 WiiWare game Pole’s Great Adventure. 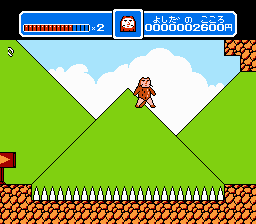 The enemies are silly. One includes a book (which actually has “hon”, the word for book, written on it, if weren’t clear) that attacks with a mix of Japanese characters and gibberish. There are random people jumping rope. You’ll also find totally nude streakers, all of whom are killed with an arrow from off screen. At one point you’ll fight a Superman rip-off, except it appears he has a noticeable erection. The final boss is a gigantic salaryman that takes up nearly 2/3rds of the entire screen. 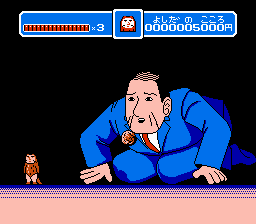 Of course, the big problem with Utsurun Desu is that it’s too busy trying to be clever rather than creating anything remotely playable. Kawauso is slow, and he attacks by slapping, which barely has any reach. The levels are short and inconsequential, except when there’s a gimmick behind them, like the repeating “lost forest” type maze in the second stage. (To bypass this, just put in a cheat code: on the title screen (the real one), press A, B, Select and Start at the same time. If you did it correctly, you’ll see a black screen instead of the pre-level message. Repeatedly press B to select your level.) The game was released in 1991, so it looks nicer than most of the earlier-era Famicom kusoges, but beyond its humor, it’s still an inane platformer with no real effort placed into the actual design.