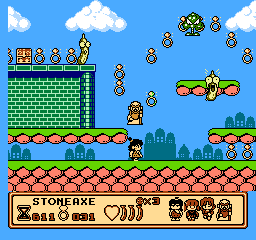 KID was one of the many, many mid-level developers for the Famicom/NES –  too small to actually publish their own titles, with many of their games developed at the behest of Taxan, but distinctive enough that you can find common threads in all of their titles. They often contained clever and original ideas, but were almost always bogged down by spotty technical implementations. Some of their games were pretty decent, but no one would ever confuse their G. I. Joe NES game with Contra.

Banana Price is one of their lesser known titles, having only been published in Japan, and, strangely enough, Germany. It tells the story of young boy adventuring through a word of dangerous fruit and vegetables, in order to rescue a princess . Enemies include human-sized bananas with bulging eyes; locations include a tomato factory. It is quite cute and silly. Plus, rather than relegating the love-dovey damsel-in-distress to the ending cutscenes, there are many fine young ladies throughout the kingdom, lending the prince a peck on his cheek for his efforts. 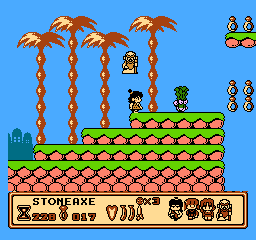 The prince’s main special ability is to cause large stalks to spring from the ground, flinging him upwards and allowing longer jumps. His standard sword is too short and too weak, often exposing him to danger, but spread generously throughout each stage are rings, which are used to purchase a number of projectile-firing weapons. Certain treasure chests will also give you the protection of a sage, who mostly sits closely by to fend off enemies attack but also goes on the offensive when the proper items are obtained. In addition to shops, you can gain extra rings by gambling at casinos, or playing a relatively expansive board game, which is the framing device for a quiz gameshow. These are found throughout the levels, but can also be accessed between levels. That board game is pretty important, because while it’s not technically essential to beating the game, it is highly advised, since they give health bonuses, plus it’s required to beat some of them in order to get the best ending.

While it’s a full-featured, clever game with ambitious mechanics and a great concept, like KID’s other titles, it suffers from some issues, both technical and artistic. For starters, it’s probably the most animated game on Nintendo’s 8-bit system, and not in a good way. On the very first screen, the clouds in the background are pulsating, the rings are twirling, even bits in the status bar are spinning. In the corner, there are images of the four warriors, who pointlessly march in place. While it’s nice and lively, it’s also a bit distracting, and coupled with the choppy scrolling, can potentially cause minor headaches.

The graphic style is amusing and filled with minor touches – the comical faces of the various fruit and vegetable enemies, the little sweat drops that pop off the Prince’s head when he jump and grabs onto a ladder, as well as the panicked expression on his face when a stalk shoots him upward — but the color palette alternates between muddy and garish. The prince doesn’t quite move right, walking too fast and jumping too high but not quite far enough to clear most pits (you need to use your stalk jumps), and enemy movements feel erratic. Projectiles are only fired after the prince has finished his sword-swinging animation, which provides a nearly-second long lag between pressing the attack button and actually attacking, which unnecessarily complicates boss fights. 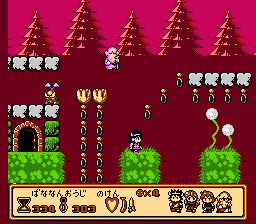 While the levels are often constructed with multiple paths and hidden goodies, there’s no backwards scrolling, making the stages very difficult to explore. Bonus items are numerous, but rather than waiting to be collected, they pop up and then quickly fall off the screen, which is seems to be a strange trademark of KID-developed titles. And the swimming physics are awful, requiring that you mash the A-button to merely stay afloat. Then there’s the board game, which mostly consist of quiz spaces. The issue is, there are only 64 of them, and they cycle in the same order over and over. Considering you’ll be playing these a lot games a whole lot, they grow repetitive extremely quickly.

This problems dampen the game’s, but they don’t ruin it either. It’s enough of a weird, silly little game that it’s still plenty of fun, and it shows a level of exuberance rarely seen in more polished titles.

The Japanese name translates to “The Great Adventures of the Prince Bananan”, shortened to just Banana Prince for the German release. The design of the character has been changed from a super deformed knight to something resembling a caveboy, sort of similar to the titular character in Sega/Westone’s Wonder Boy. The text has been translated to German, of course. An English fan translation was based on the German version, which is helpful, considering the quiz questions are almost impossible unless you know the language or have a guide handy. 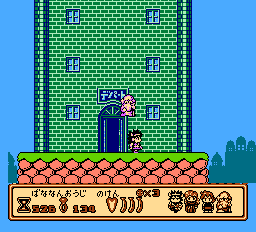 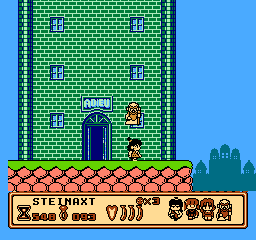 The German translation has at least one amusing gaffe – in the Japanese version, the shops have a sign above them that says “depart”, written in katakana, which is meant to mean “department store”. The German version misinterprets “depart” here as meaning “leave”, so this sign is translated to “adieu”, or French for “farewell”. The English fan translation further changes this to “Goodbye”. 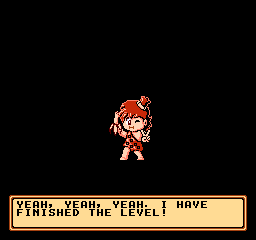 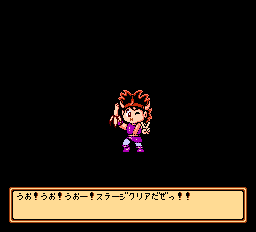 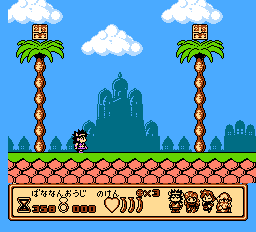