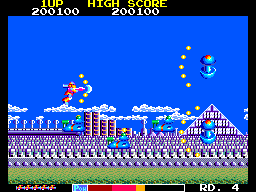 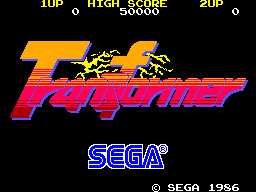 Sega gave the mecha shoot-em-up genre a go for a third time in 1986 with an arcade game that runs on the System E hardware, which is basically identical to the Master System. This is also called Astro Flash in Japan, despite being a different game, and just plain named Transformer for overseas release.

This entry returns the same concept as Orguss, where you can change between ship and mecha form at any time. However, each has different weapons – the ship form only fires forward, while the mecha form fires a spread beam. The mecha form also slows down the scrolling speed, but there’s no timer to worry about any more, and it actually makes dealing with enemies a little easier due to the slower page. There are no longer any weapon power-ups, but instead you gain strength as you continually destroy enemies, increasing your weapon strength along with it. You can only take a single hit before dying, sending you back to a checkpoint and resetting your power. 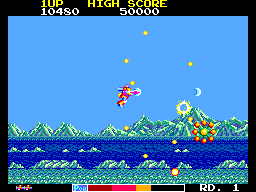 The visuals and enemy patterns are completely different from either game, with a bright color palette. There are four distinct stages – an arctic stage, a city stage, a wasteland stage that takes place against dusk, and another city stage. They are divided into halves, with the second half being an underground base. There are unique bosses at the end of each too, including a floating brain at the last stage. It’s still not a very long game, but it feels like the concepts set down by the earlier SG-1000 and Master System games are more fully realized here. However, it saw sparse distribution in arcades and never saw a home port, so it’s not nearly as well known as TransBot.