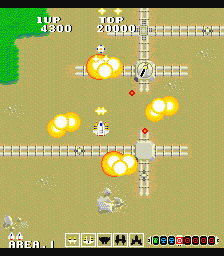 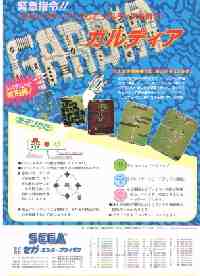 Nearly every shoot-em-up taking place in a vertical overhead perspective after 1982 is basically a different form of Xevious. Still, vertical shoot-em-up continued to be ubiquitous and akin to Xevious, and that’s particularly the case for Sega/Coreland’s Gardia. It’s perhaps one of the more shameless clones of Namco’s seminal shooter, but that doesn’t make it a bad game inherently. It is fun for what it is despite its significant similarities, and a well-designed knock-off may be preferable to completely original crap.

Gardia starts out like any conventional shoot-em-up with a bird’s-eye view of the forest-and-plains terrain below. In the Xevious overhead mold, you have a main cannon for aerial targets and an endless supply of bombs for ground targets. Your cannon is an expected peashooter as it starts out, but it can take care of most popcorn enemies with ease. More evasive and enduring enemies are better taken care of with a stronger cannon, and to bolster your ship’s gunpower, you can grab a new component part as it pops up at the top-center of the screen. However, you have to work for your powerup, which is surrounded by circling spiked balls. Each new powerup you grab either makes the balls bigger or adds more for the next powerup, and this is keeping in mind the enemy fire you’ll have to navigate through as well. If you plunge into the center of these danger zones, you are rewarded with a significant boost to your cannon’s power and/or spread. The maximum upgrade transforms your main cannon into an impressive wide beam which fills up between a third and half of the screen with each individual shot. Don’t be so focused on what’s above that you neglect the dangers below with your bombs. Unlike most other bombs which are dropped as indicated by a cursor (including Xevious, sorry to mention), your explosive is already floating in front of your ship ready and raring to go. It may take a bit of effort to get used to these no-delay drops, but they can be quite advantageous. However, there are absolutely no power-ups for your bombs unlike your main gun, so using them proper comes strictly down to timing.

Some ground turrets which you demolish give you point emblems, while others give you moving tokens that are either a common red, or a rarer blue or green. If you pick up five reds, two blues and a green, your ship reaches maximum power and, in addition to the widespread main cannon, grants you an orbiting shield orb that blocks shots and smashes enemies. Whatever firepower you can get is helpful against the increasingly tough amount of enemies you face, such as these widespread bars that take several hits to destroy or obnoxious bombs which split into seven spheres when struck. A couple of segments force you to navigate through expanding and retracting pipes with little room for error, and the middle of each stage pits you against a midboss duo of are larger-than-normal enemy ships which take more punishment than usual. While there is some variety to the midbosses, it’s somewhat ironic and disappointing that you essentially end up fighting the same boss at the end of each stage. A rather disturbing tangle of red vines (possibly veins?!) lead up to some sort of weird platform with foreign symbols on it, and some giant gray mothership appears to blast lasers down on you like the ubiquitous Big Core boss from Gradius.

That’s the basic structure to Gardia, nothing more complex than the sum of its parts. There are four stages all in all, but the amount of enemy fire becomes ridiculous halfway in and it can be quite a tough fight to beat the fourth. While a tough game, it never feels like money wasted to even pop in a quarter with such a brightly-designed shooter. The graphics are typically vibrant for Coreland’s Sega collaborations, and while the backgrounds aren’t anything special, they’re at least consistently modeled. The main musical theme is also quite catchy with a quick pace and upbeat sound, with an even more positive tune coming into play if you somehow manage to maintain a full power-up state, and the gloomy boss tune sets the appropriate mood for the hellish red background. There’s a lot to like about Gardia, even if it couldn’t be a more blatant “homage” to Xevious. It’s a fun if not somewhat basic shoot-em-up that may not go down in Sega’s annals as a classic, but it’s good enough for a shooter that wears its influences on its sleeve.