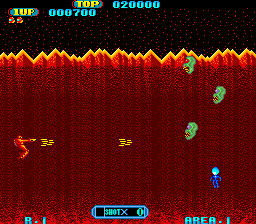 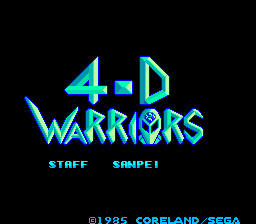 There are many different sub-genres of shoot-em-ups that it’s tough to classify them all by their shared tropes, but nearly every shoot-em-up is ultimately unique even if not just for one seemingly insignificant feature. Many 80s shoot-em-ups owe their existence to Konami’s Gradius / Nemesis, or if you wanted to roll even farther back, Scramble. Your basic horizontal shoot-em-up thus consists of a sideways scrolling landscape that often takes place in space where you pilot a ship and take down as many enemies you can without getting zapped yourself. Then there are those slight changes to this formula, like making “space” into “alien base” and “ship” into “rocket-propelled man.” This is what Capcom did with Section Z, an innovative shooter where you could fly up and down and shoot left and right instead of moving and shooting in one direction all the time. Take a glance at another shooter, like Sega/Coreland’s 4-D Warriors, and you may be tempted to label it a ripoff of Section Z on the simple premise that your player character is a red-suited space fighter akin to Capcom’s venture. 4-D Warriors is actually quite different, as it basically throws out the concept of stage structure and throws you into bizarre landscapes while actively pursuing major enemies through a gauntlet of grotesque goons.

Your goal in 4-D Warriors is to infiltrate what appears to be some screwed up version of quantum space where you are beset by legions of foes. Most of them are xenomorphic heads that either just shoot at you or float around, but there are a lot of them to face in any given stretch. Behind them is an alien leader who fires projectiles from afar and takes multiple hits to bring down, and if you hit it enough, it flies over the top edge of the screen and disappears over the horizon. Preventing you from doing the same and flying too far upward is some bizarre blobby entity that doesn’t kill you, but just bumps you down if you try to fly high. It comes and goes, and whenever that alien sponge thingy isn’t floating at the top of the screen, you can actually move over the edge of the background and end up on the other side of the playfield. This puts you into a parallel dimension with a darker color tone and where gravity is constantly dragging you down. Leaders usually tend to hang out in the alternate dimensions, where there are usually less enemies, but they can just as easily head back to the normal dimension to flee from your offense. You have to pursue each leader back and forth between the dimensions until you can destroy them; if you successfully terminate three mid-bosses, a myriad of normal enemies to form together and make a big boss for you to fight before you can properly end the stage.

Making it easier to destroy enemies are subweapons which look like rupees from The Legend of Zelda. You get limited ammunition for piercing weapons like fireballs and boomerangs which do more damage than your default gun. Making it harder to win are small mirrors which bounce your shots back, and you will be sick of these things when it comes time to fight the boss. Making it even harder to claim victory are malicious warps to alternate dimensions that prevent you from escaping until you destroy a special enemy. For example, you can get gulped up by a giant red space worm and be transported into their infinite stomach where you are completely spammed by blue heads. Unless you have any weapons which can clean them out, your death is imminent in this digestive tract until you destroy this pulsating growth which appears on the intestinal lining in the background. Eww. Then you’ll have to deal with these weird diamond thingies that whisk you away to a serene field which is interrupted by giant eyeballs. The overtly cheerful colors and music of this dimension juxtaposed by the horrible eyes bursting from the ground make for some disconcerting dissonance. There’s also a third type of interdimensional gate in the form of large mirrors which form at the back of the screen and slowly drift forward. Getting sucked in by these reflective panels can actually take you to one of two areas which just so happen to be the freakiest segments of the game. One disturbing dimension is a green hall full of stone faces which come to life and blue heads which barf blood, and the other is some dead space with red and orange globs and eye-crowned pyramids rushing you en masse. All of these side stages should be avoided unless you intend to boost your score, as they’re quite tough and can cost you several lives before escaping.

The constant warping dimensional factor is what gives 4-D Warriors its title, not incredibly advanced technology that somehow projects its actual graphics in four dimensions. While this may appear as false advertising up front, the graphics are actually rather bold with unsettling colors used to cast the feeling of strange and unfamiliar worlds, such as the blood reds and midnight blues of the first stage. The music often sets to the mood, with the main tune striking a medium between “encouraging” and “dangerous” with a constant beat. The sound effects are a bit loud and odd, but that’s par for the course on Coreland’s games under Sega. On the whole, 4-D Warriors was quite stylish for its time and is still a decidedly interesting shmup to play, putting an interesting twist on the basic formula by causing you to switch between dimensions in pursuit of the boss. It gets incredibly difficult at times and most of the “penalty dimensions” are especially evil, but if not just for how it looks, 4-D Warriors is definitely worth a play. Just don’t expect it to bend the space-time continuum.