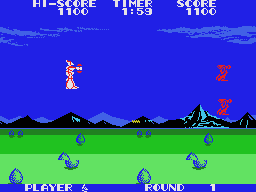 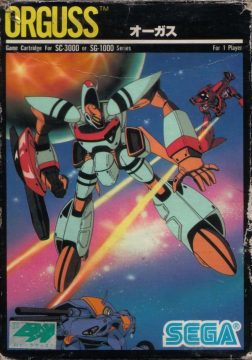 Super Dimension Century Orguss is a 1983 sci-fi anime from studio Big West, and a follow-up to Macross, also known as the first part of Robotech. It wasn’t nearly as popular, but it did get a video shoot-em-up tie-in for the SG-1000, released in 1984.

As with Macross, the big aspect of this game that sets it apart from other shooters is the transforming robot. Your ship, the Orguss, has two forms – the spaceship form, which is faster but can’t attack enemies at the bottom part of the screen, and the mecha form, which is slower, but can attack anywhere. However, there’s a timer at the top of the screen, and you only have a few minutes to reach the Space/Time Oscillation Bomb at the end. The mecha form is so slow that it’s impossible to reach and destroy it within the time limit. And since there’s little benefit to using it otherwise, you may as well just stay in ship form, in which case it’s just a fairly straightforward shooter with some choppy scrolling, like most other games on the system. 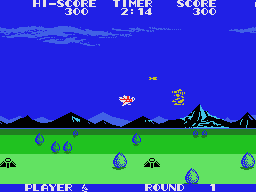 There’s only one stage, with three sections – one over land, one over sea, and one over a checkerboard pattern, where you fight the Space/Time Oscillation Bomb. But this is only three minutes of gameplay, then the game loops infinitely. It’s not even an interesting setting since it only encompasses the first episode of the anime, ignoring the unusual jungle-like worldview that made it so interesting. At any rate, shooters were uncommon on the SG-1000, as were anime tie-ins, but this one is still a dud.