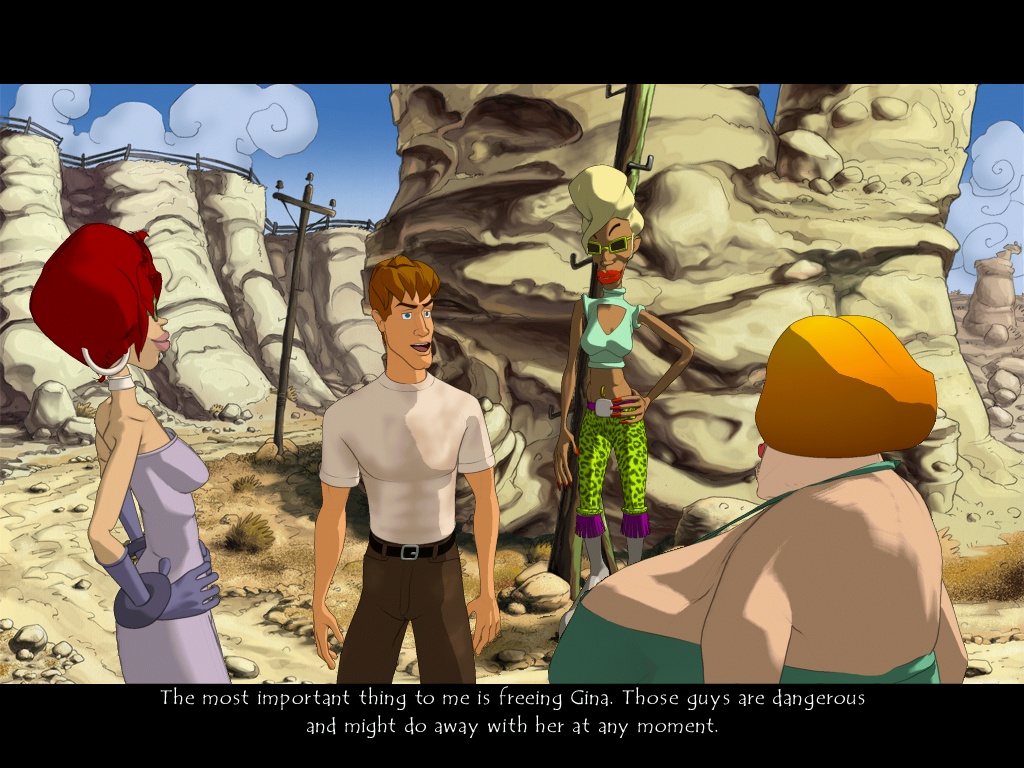 Runaway, a trilogy of adventure games developed by Spanish developer Pendulo Studios (who made Igor: Objective Uikokahonia and Hollywood Monsters, the latter of which was never translated into English), might be one of the most controversial series in the genre. When the first game was released in Europe in 2001, many proclaimed the cartoonish adventure to be a return to form, the true successor to LucasArts’ legendarily humorous titles. Others found it a harrowingly shallow experience, one with gorgeous graphics but completely lacking both the soul and the wit of the genre’s golden years. Despite the gigantic schism in the audience, Runaway spawned two sequels, to the delight of fans and the apathy of everyone else.

Runaway tells the story of the nerdy Brian Basco, picking up as he’s preparing to make a cross-country journey. Just before his trek gets started, he accidentally runs over a gorgeous nightclub dancer named Gina Timmins, who’s being pursued by a group of gangsters. Brian takes her to the hospital and helps her recover, after which she recounts the events that landed her in hot water. Not only was she a witness of a brutal murder, but she’s also in possession of a mysterious cross passed down from her father. After checking in with one of Brian’s friends, the two learn that the cross is an artifact from the Hopi Indian tribe, but before they can investigate further they are captured by the gangster henchmen. Separated from each other, it’s up to Brian alone to not only rescue Gina (again), but discover the secret behind her cross. 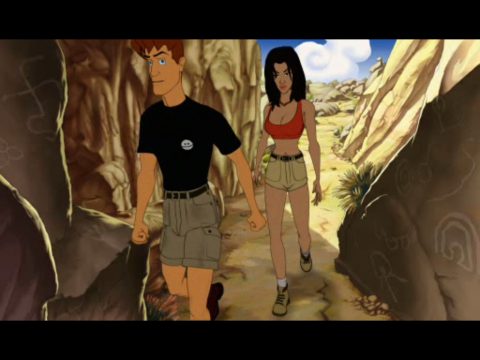 From the get go, Runaway presents a number of problems, most of which have to do with the weak writing. The most prominent issue stems from the hero himself – Brian is an awkward, nerdy character who exuberantly comments on every single thing that you do. Many works of fiction revolve around hapless underdogs, but they need to be at least somewhat charming. Brian isn’t, because nothing that comes out of his mouth is ever even remotely funny. Each of the game’s six chapters are introduced with Brian sitting against a black background, regaling his story in flashbacks and elaborating on the madcap situations he’s gotten himself into. It would’ve been much more beneficial to, you know, actually show them, instead of having some mook talk about his totally crazy escapades. The running theme is Brian’s evolution from a weenie to a totally cool dude, although how his adventures trigger this change isn’t entirely evident.

The subpar writing completely affects everything. Brian’s prime motivation throughout the whole adventure is due to his infatuation with Gina, who’s largely absent through most of the journey anyway. The narrative simply assumes that her pretty hair and ample melons are sufficiently compelling characteristics, despite the fact that she has a somewhat bitchy attitude. It just doesn’t work. Furthermore, there are some moments that should be funny, like when Brian ends up stranded in the desert along with a trio of crossdressers. It’s like the developers thought that the very concept of transvestites was hilarious enough to carry itself, without actually going through the effort to write any jokes. Many of characters like to namedrop famous movies and other pop culture references, but never to any great effect.

Then there are the witless supporting characters, like the upbeat techie nerd girl Sushi and her gang of hippie pals. One of them really likes marijuana, and that’s about as funny as the jokes get. Even worse is the UFO conspiracy nut Joshua, an Asian caricature with gigantic glasses, embarrassing buck teeth, and an unfortunately racist accent. Maybe the dialogue is actually much better in its native Spanish, but in English, it’s all quite bland. The English voice acting doesn’t help either. Although most of it isn’t explicitly bad (despite one actor clearly voicing several roles), it is lifeless, and never expresses any of the humor that’s supposed to be there. It doesn’t help that a good chunk of the game is just a random series of escapades up until the final chapter, when the plot takes a few interesting twists, but it’s a bit too little, too late. 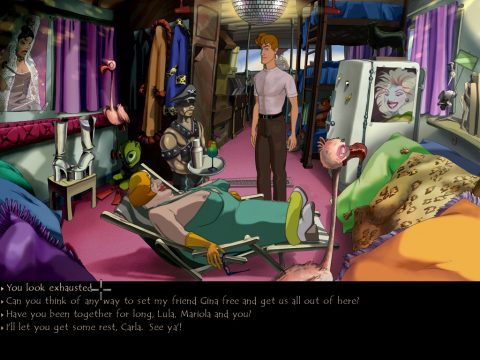 Beyond the story, the game isn’t terribly well designed either. The puzzle solving is all rigidly linear, because Brian won’t pick up certain objects unless he knows there’s a specific use for it. This means that you’ll spend lots of time looking for event triggers and then retracing your steps to find what you weren’t allowed to grab in the first place. The puzzles themselves constantly devolve into absurdity. In one instance, you need to find some lubricant so you can fix a machine gun. One of the crossdressers has some tanning lotion, but won’t let you have it because her tan’s not done. In order to obtain it from her, you need to steal her sunglasses and dip them in a pool of oil. The logic is that the oil makes the glasses darker, so when you give them back to her, she’ll think her tan is darker than it really is, so she’ll willfully give you the lotion. There are all kinds of problems with this puzzle. First off, if you can steal her sunglasses without her noticing, why can’t you steal her lotion too? Secondly, if the tanning lotion works as suitable lubricant, why doesn’t the pool of oil? Thirdly, under no circumstance would oil make sunglasses darker – it would just look really messy.

This is far from the only moronic puzzle. One character will attempt to give you a trowel, except he accidentally chucks out the window, where it lands in a dirty trough. Brian won’t man up and just stick his hand in to grab it. Instead, you need to find a flower pot and drop it from a ledge into the trough, displacing the water and causing the trowel to overflow out onto the ground. Try not to think about the physics of this, much less the stupidity behind it.

These puzzles are both quite daft, but there’s an even more troublesome one. Out in the desert, you need to get into a shack, which is predictably locked. However, one of the guards lets loose a hint that the local fire ant population, which is astoundingly vicious, is attracted to peanut butter. The only jar of peanut butter you find is empty, so you need to make your own by grabbing an army helmet, mixing butter and peanuts together, and leaving it to melt in the sun. Then, you smear your homemade concoction on to the shed, attracting the ants to eat it entirely. It’s kind of stupid, because anyone can clearly tell you that’s not how to make peanut butter. But a puzzle like this would work in something like Monkey Island, because it’s the sort of ridiculous game where that kind of lateral logic applies. Runaway, on the other hand, might look cartoony, but the world itself, outside of the puzzles and a few isolated instances involving aliens and mysticism, is largely grounded in reality. 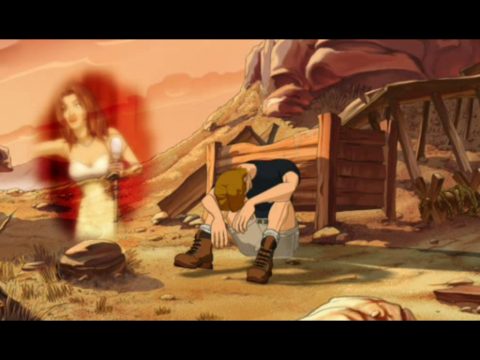 Runaway’s biggest problem is that its tone is all over the place. Early in the game, you meet a goofy surfer dude janitor, who, shortly thereafter, is brutally shot to death. That’s… not funny at all. Later, when Gina accidentally falls down a mine shaft and is presumed dead, there’s a scene where Brian mopes and remembers their sparse time together, complete with a ghostly montage and sappy music. Here, Brian is monumentally shaken up about some girl he just met and with whom he has spent maybe five minutes of completely charmless screen time. Is this meant to be ironic? Or are we actually expected to take this seriously? If the game’s supposed to be a comedic adventure, why is it so violent, and not in the light-hearted slapstick kind of way? And if it’s trying to be a vaguely serious mafia heist story, then why does it keep trying to be funny? It never pulls off the balance it’s aiming for, and just comes across as really uncomfortable.

It’s a real shame that Runaway is so terribly written, because it does indeed look damn good. The backgrounds are all hand drawn and scanned at a very high 1024×768 resolution, and only get prettier as you get farther into the adventure. The characters are rendered in cel-shaded 3D, with filters applied to make them appear two dimensional. It purposefully limits the framerate so it looks choppier than normal 3D, but at the same time, looks much more similar to a classic 2D game. The only real failing comes in the cutscenes, where the limited facial animations make everyone look like robots when speaking. The music is strangely dramatic, another aspect which totally clashes with the tone. The poppy opening vocal song is suitably dubbed “Runaway” and is sung by Vera Dominguez, then of the Spanish band Liquor and more recently of My Haircut. Her English is a bit slurred, but it’s a surprisingly catchy song, if a bit cheesy.

It’s easy to see why Runaway holds some appeal. At the time it was released, it was an oasis amongst a desert of other dry and/or badly-designed European entries, and the fact that it consciously emulated the classic style of point-and-click adventuring was a distinct plus. While it may have seemed fresh, and its usages of modern technology makes it look totally fantastic, beneath that veneer it is dully written and questionably designed.