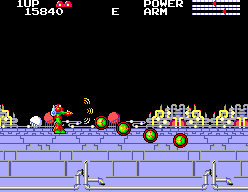 Sega followed up their mecha shooter Orguss with a spiritual successor on the Master System in 1985, stripped of any anime license. Called Astro Flash in Japan, it was renamed TransBot elsewhere, likely to capitalize off the Transformers property. It received a cartridge release in Europe and Australia, as well as Brazil, where it was renamed Nuclear Creature.

The game is set up pretty similarly, as a side-scrolling shooter where you control a transforming robot, called the CA-214, fighting against the forces of the evil AI Dalaus. In this game, you can no longer freely transform between ship and mecha forms. Instead, there are Arm Carrier trucks at the bottom of the screen, which will release a weapon select power-up. When you grab it, the game will cycle through six weapons, which you can select with the secondary button. Certain weapons, like the “B” Beam and “D” Cannon are used in the ship form, while other weapons, like the “C” Sword Fire and “F” Two Direction shot use the mecha form. The “C” Sword Fire is easily the best weapon because it’s an enormous wave that blasts through basically anything. Typically weapons that are more powerful use the mecha form, but also make you a bigger target for bullets. These weapons have limited ammo, but these trucks appear regularly, and you can stock a secondary weapon bubble to activate if you run out, so you’re rarely stuck with the default gun. Unlike most shooters, your ship can take a few hits before being destroyed, but you are sent back to an earlier point if you die. 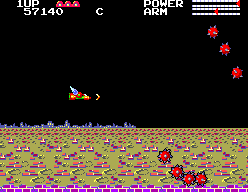 However, the game was originally released on the Sega MyCard format, which is limited to 32kb of ROM. It looks much better than Orguss, with some nice parallax scrolling, and the main music theme is catchy too. But it’s still an incredibly short game. The game takes place on a moon-like planet, which cycles through a few backgrounds, including one filled with craters, a futuristic city, and a brick-pattern. This section continues infinitely until you get the right weapon and destroy the right enemies, which will unlock the secret underground base. Once you go through this brief section and defeat the walking robot at the end, you go back above ground and the game effectively restarts. The second loop has some different enemies and patterns, but doesn’t change much after that, so again, the actual game lasts maybe ten minutes. Since the method to access the subterranean base isn’t explained, it’s obviously that the developers intended this little puzzle to extend the length of the game a bit. It’s fun, there’s just not nearly enough of it. 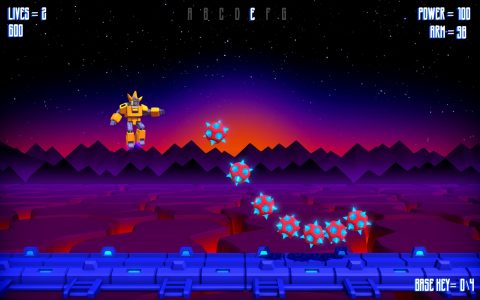 Still, the game has garnered some affection among Master System fans, and in 2018, Kristian ‘CVGZ’ Hawkinson of Retro Game Geeks created an unofficial remake for Windows. Developed using Unity, it features HD polygonal visuals, an arranged soundtrack, and even some new artwork. While the basic gameplay is the same, it’s been tweaked a bit, so that there are now three distinct levels, with each underground base being unique, and each battle against the walking robot being slightly different. Rather than trying to figure out an obtuse secret to unlock the base, all you need to do is collect the key icons dropped by a specific enemy wave. All in all, it’s a fantastic tribute – there’s even a mockup of a box cover along with modernized manuals in a few languages. 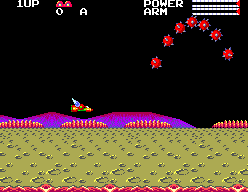 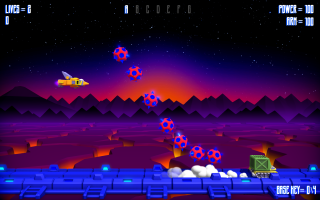 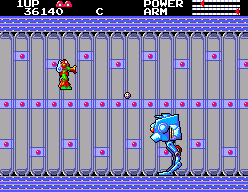 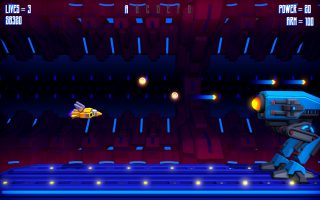