Weird games can be good sometimes. They slip under the radar and turn into hidden gems. Some weird games are awesome, while others are pretty bad. Top Banana for the Amiga is just plain bad.

From the moment you turn this thing on you’ll wonder if the game hasn’t somehow corrupted itself. The visuals are a horrendous patchworked mess, appearing like a cross between morning sickness and a really bad Gustav Klimpt painting. In fact in some sections it looks like they used actual scans of from a Klimpt painting! Maximum effort has been made so that the backgrounds make it impossible to discern either enemies or item pick-ups. You wouldn’t imagine it’s supposed to be an environmental game – chainsaws and radiation logos are the only connection. 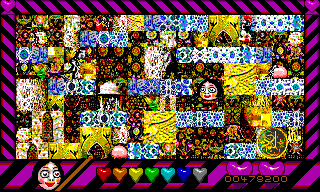 You have to climb up through the levels to escape an ever rising water level, kind of like Rainbow Islands, only infinitely less playable. Throughout there are enemies that have such poorly drawn sprites you can never figure out what the hell they are. Your main only mode of attack is throwing hearts, and there is only one upgrade. All it does is give you some range, but it’s taken away the moment you get hit.

There are three items: a bullseye (weapon upgrade); faucet (stops the water for a short while); and the flower, which activates platforms. Unfortunately item functionality is insidiously broken: in order to collect them you first have to shoot them. Try to pick one up without shooting it first and it hurts you! Whenever an enemy or an item that you haven’t shelled hits you, you not only take damage but also fall through the platform you’re on. 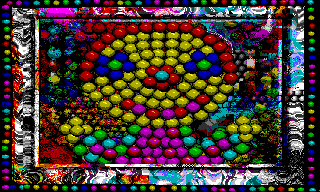 The biggest flaw in Top Banana is the jump mechanica. There’s no way to limit your height, which 90% of the time means you’re going to hit an enemy as high as two platforms above you. For a game that boasts on the box that it’s supposedly just as good as Mario or Sonic, this is really shameful. Making it worse is that the second world adds a section where you have to ascend before your separate 몉adiation’ bar runs out. Not only do these areas invert the colours, but they speeds the game up by over 50%, making for a mercilessly painful climb. Out of 12 levels, 9 of them have this abhorrent mechanic.

And finally, even though you appear to have two hearts peeking from behind your score, this in fact means absolutely nothing, as you are only given one life to finish the entire game.