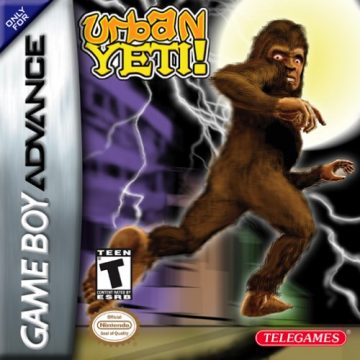 Urban Yeti! is not what many people would term as a “good” game. Some might even term it “terrible”, or they were being particularly cruel, “abhorrent”. At first glance, Urban Yeti! might seem to fall into that category, a game that is laughable in both content and execution, made solely for the sake of its own self-deprecation. As the title succinctly explains, this game is about an urban yeti. That alone boggles the mind. It features some rather poor controls, has storyline sequences that demonstrate some particularly abominable uses of Photoshop, and overall, is something of a sloppy mess.

And yet, it would be great if there were more games like it. 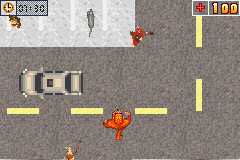 Urban Yeti! seems like the kind of game that was designed and programmed by some drunken computer science students who had nothing better to do over their spring break. Upon doing some research, the game was developed by Cave Barn Studios, a small Canadian outfit that was part of another small company named RUNANDGUN. Like many Gameboy developers, they were stuck churning out the typical licensed crap that we all know and hate, games like Animorphs and some game called Wicked Surfing. Urban Yeti! was one of their few “original” games, and was funded entirely inhouse. Urban Yeti! is a labor of love, and it shows. The goofy sense of humor is something that would have never flown with corporate suits and their focus groups. I can imagine Cave Barn Studios trying to sell them idea to a company like Electronic Arts, only to be met by a disheveled Larry Probst at the door, with his finger hovering over a large red button that says “Release The Hounds”. Yet somehow they got a publishing deal with British game retailer Telegames, who also published anti-classics like Soccer Kid. 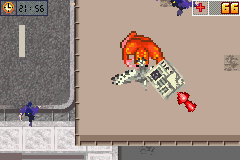 Urban Yeti! can be appreciated because it’s goofy and crazy, in the same way that Earthworm Jim was back in the 16-bit era. The “game” is merely a deliverance method of this silliness. The game opens with pounding guitars, impressive for the GBA – the opening titles tell us the libraries were licensed from Factor 5, who have done some amazing things with however the GBA produces sound. This is important in regards to the “Great Urban Yeti Freak-Out”, but we’ll get to that later. The opening text in the intro tells this epic far better than any simple review could: 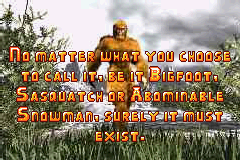 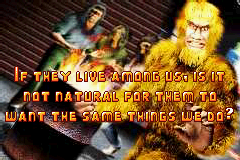 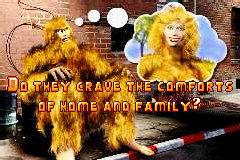 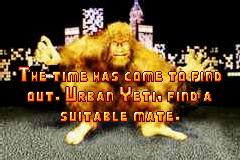 And thusly, Urban Yeti sets off on his whimsical tale to find a mate. Most of the game is played with an overhead view similar to the original Grand Theft Auto games. The three-dimensional buildings are pretty impressive, but the little system can’t quite handle it, as the game slows down more often than it runs at standard speed. Almost everything on the screen, including your yeti, is displayed as a mass of pixels that kinda sorta look like discernable objects. Your destination is hinted at by an arrow, which indicates from time to time what direction to go, and while it seems innocuous enough, it’s here that the problems begin. 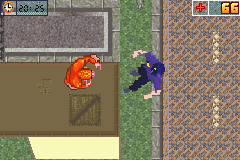 There’s no map, and your navigation arrow only appears sporadically. Not only that, but sometimes your goals are moving, so tracking them around with a compass that doesn’t really work is not really all that fun. While you’re stumbling around, you need to avoid cars, which is not easy since the viewpoint is quite zoomed in, and occasionally avoid getting crapped on by birds. Considering you’re a gigantic beast, you can’t really cause much damage. Apart from your fists, your only other method of attack comes in the form of a boombox. Turning one of these one will drop a phat dance beat, causing Urban Yeti and everything on the screen to engage in some hardcore disco dancing. This is the “Freakout” mentioned about before – these haven’t been seen since Michael Jackson’s Moonwalker, and is the number one feature that needs to be sees in more video games. 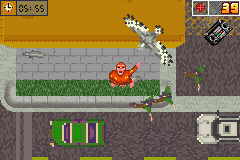 Yet, the very situation is bizarre enough to elicit interest, enough to ignore all of these noted complaints. After all, Urban Yeti NEEDS loving. Are you going to let him down?  One would hope not.  So, the first arrow tells Urban Yeti to go north, so you take him north, in hopes that this will be his first step towards carnal bliss.

His exuberance is quickly cut short when he tries to leave his island, only to be met with the following message of doom: 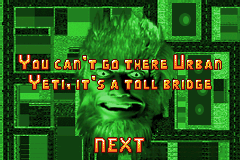 Lacking any semblance of cash, Urban Yeti follows the little indicator above his head, that points towards a newspaper article floating on a building rooftop. Apparently, the local soup kitchen is hiring! So, Urban Yeti finds his future place of employment, waits for it to open, and begins his first day of gainful employment. 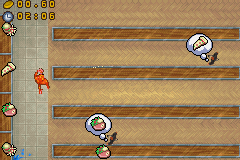 And thus begins the first mini-game. Which is exactly the same as Midway’s classic arcade game Tapper. Earn enough money and you’re off to cross the bridge like the rich yeti you’ve become. Most of the game follows this structure – follow the arrow on the screen, getting new objectives, and repeat, until you come across one of the other minigames. The second minigame is a Yeti ultimate Frisbee tournament that plays vaguely like Discs of Tron. 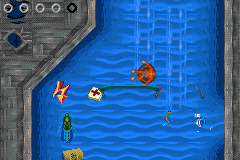 The third one is a tribute to the Midway classic Toobin’. The fourth is a completely original game called “The Chicken Toss”, which is exactly as it sounds – you need to hurl various fowl into a grinder, all while avoiding the wrath of a particularly furious rooster. These minigames are undoubtedly the best part of Urban Yeti! – they mimic the classics they’re patterned after fairly well, and can be accessed at any time through a cheat code. 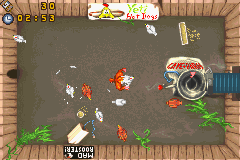 So yes, Urban Yeti! is sloppy. Apart from the enjoyable minigames, it’s barely playable. But it also displays an off-the-wall sense of humor that’s all too rare in video gaming. Assuming you can find a boxed copy, it also comes with a poster, which you can hang on your wall to confuse your friends. It’s wacky, it’s unique, and it has that intangible thing called soul. The fact that it isn’t particularly good shouldn’t matter – everyone should play and appreciate Urban Yeti!. I say that with a totally straight face. Seriously. Shortly after Urban Yeti! was released, Cave Barn Studios closed down. Yes, they died to bring you this game. You gonna pass that up? 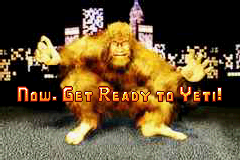 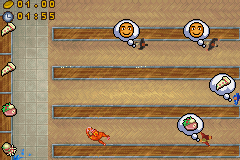 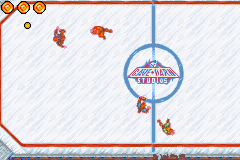 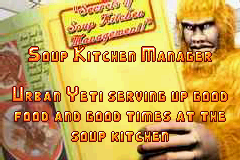 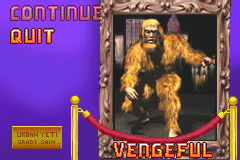 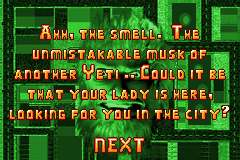