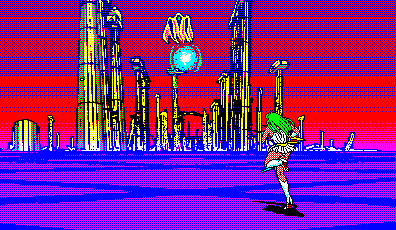 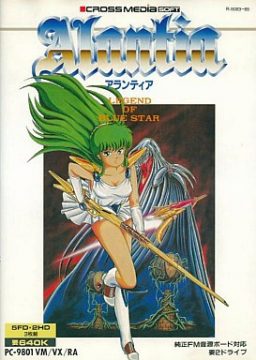 Alantia, developed by Cross Media Soft and published by Victor Musical Industries, is a rail shooter for the PC88VA and PC98 computers, much like Space Harrier, but with a few twists. Most significantly, instead of a flying man, you play as a running girl that shoots magic bolts from her staff. While it boasts some impressive visual design and some excellent music, it’s brought down by some fairly significant flaws.

The story is about Princess Erina, who has her family murdered and her kingdom destroyed by The Dark Lord Ezikiel. Once Ezikiel took the kingdom he let loose hordes of demons to roam the land, ruling the world like a tyrant. Years later, Princess Erina is grown up and a powerful wizard. She feels strong enough to take on The Dark Lord Ezikiel and his demon horde alone, take back the land that is rightfully hers, and avenge the deaths of her parents. 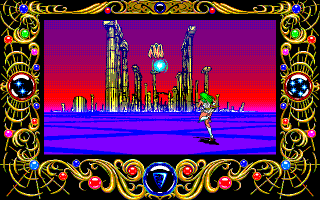 Before every level you get to choose what weapon to bring. The blue crest is a shield generator. It protects you for a few hits and doubles your health bar. This is very useful if you don’t even want to try killing enemies and just want to survive to the end. The pink rod is a Beam Generator, which lets you shoot rapid fire. It’s a lot more useful than it sounds because almost every non-popcorn enemy is a total bullet sponge. You get a choice of new items every time you beat a level. Besides the default pink rod and blue shield, you can take a green crystal which is neutral. It gives you a low health bar like with the pink rod and slow weak shots like with the blue shield, with no advantages. You probably shouldn’t choose the green crystal unless you’re a glutton for punishment. There’ss also a bonus item you get for beating the bonus level that makes you invincible for one level, effectively letting you skip it. The bonus level appears twice, once after level two, and again right after level four. You don’t get the bonus item if you already completed it, though, so you only get to use it once. 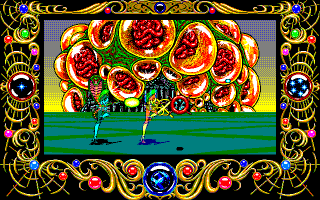 The levels themselves look pretty cool, featuring textured floors, huge sprites, lots of enemies on screen, and very little slowdown. The fast action, intense music, and loud sound effects bring a general arcade feel to Alantia which is not seen very often on the PC98; very impressive for 1988.

The single biggest issue is that Atlantia looks incredible in stills but not is not only a choppy mess in motion, but is incredibly difficult to control. The first thing you may wonder “Why can’t I hit these guys?” For some reason, you can only shoot when you’re moving or squatting down. You don’t even shoot in a straight line when you’re moving either. You’ll be shooting to the far right or far left at all times. It is possible to shoot in a straight line by firing while squatting down, but the animation for squatting down and getting back up is very sluggish and enemies come at you fast, making this tactic sadly impractical. You can also shoot straight by hugging a wall, but this not only corners you, it makes it harder to get off of a wall. You also shoot directly below you while jumping, but this skill isn’t all that useful.

Alantia is blisteringly difficult. It rewards memorization over skill to the point where skill is negligible when you can’t even aim. The levels can get pretty long too and have plenty of enemies swarming the screen and huge indestructible mini-bosses that can give you a hard time. Even worse, your hitbox is huge, and coupled with the fact that movement is sluggish can lead to some very unfair situations. The best advice is to take it slow. If you rush like mad through levels trying to cut down everything in your path you will die. If you take enemy waves one at a time and be careful to not get two waves on screen at once, then you should do better. Lots of patience helps too, of course. 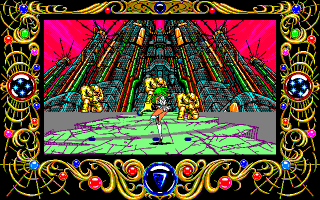 Sometimes the difficulty gets out of hand. Near the end of the game, you get assaulted by enemies that come out in patterns and two invulnerable genies that shoot very fast aimed shots. At times the enemy fire fills up the screen so much that it becomes impossible to dodge everything. Basically, if you did not save a shield generator or the invincibility item for this one level, then you’re screwed. As a good example of how screwed up the difficulty curve is, the level right after it is the easiest in the game.

While Alantia has a terrible flaw of being unable to shoot correctly and has some very frustrating difficulty problems, the level and enemy designs are actually rather good, especially considering the technical limitations of the time. The first level has huge eye monsters that harass you all through the level and can’t be destroyed. The second level has a ghost that attack in patterns and can only be killed by shooting its orb that appears near the end. The bonus level consists entirely of running toward a three-headed clown demon that can only be defeated by reaching the end of the level. Later levels tend to have monstrous bosses that can take a while to kill and are some of the hardest parts of the game. 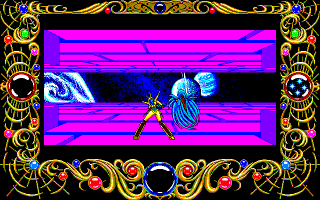 As far as bonus modes, there is also a sound test mode where you can listen to the game’s music and view concept art. It’s a pretty cool bonus feature and has some interesting enemy designs that did not make it in. Alantia closely resembles a few other games, though it has its own unique feel that makes it very different. Space Harrier is an obvious comparison, as both have very similar graphics and scaling. Jinmu Denshou, an obscure PC Engine game where you play as a running samurai that slashes instead of shoots, in a rail shooter setting, is the other best comparison. Neither of those two games get the same feel of memorizing levels and practicing aiming straight that Alantia has, though. 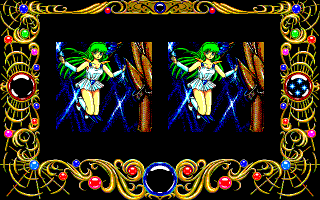 While Alantia isn’t exactly Cross Media Soft’s best work, they seemed to have learned from their mistakes and went on to make Neural Gear. Near the end of Alantia you get a straight Space Harrier type segment that plays very similarly to Neural Gear and can be seen as a sort of spiritual predecessor. The controls are much jerkier, though, and you have this worthless ability to change planes with the Z and X buttons, while in Neural Gear you simply use the mouse. There are a few other similarities between Alantia and Neural Gear, such as selecting your weapon before each level, but otherwise the two games are very different.

Special thanks to forum goers Joseph Joestar and Geishaboy for helping translate the story and some of the instructions. Also, Special Thanks to Trickless for helping with facts.

Links:
ZIGSOW This has some information and pictures of the game. The site is in Japanese, though.