Double Fine had terrible dealings with publishers for much of its early life, so during the rocky development of Brutal Legend, they started having what they call “Amnesia Fortnights.” The studio split up into small team that created four different prototypes considered for possible full games if anything would happen during Brutal Legend‘s development, and Costume Quest was given life during this time. The title was the brainchild of Tasha Harris, a former Pixar employee, who wanted to make a game that captured the nostalgic feelings of dressing up for Halloween. When Brutal Legend‘s sequel was put on indefinite hold by EA shenanigans, Costume Quest was developed into a downloadable title and became one of the studio’s most popular releases. 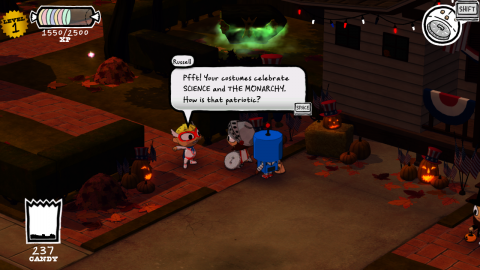 To understand modern Double Fine, the Costume Quest series is a better place to start than Psychonauts or Brutal Legend, as this is their first major success that had limited involvement from Tim Schafer. Double Fine has generally been more open about their going-ons than most other studios, even making a documentary on the development of Broken Age, and their inner workings encourage creative expression and individualism. With Schafer playing a more supportive role these days, more voices within the company have gotten the chance to put their own artistic stamps on their many releases. Costume Quest is the trend setter for all of this. 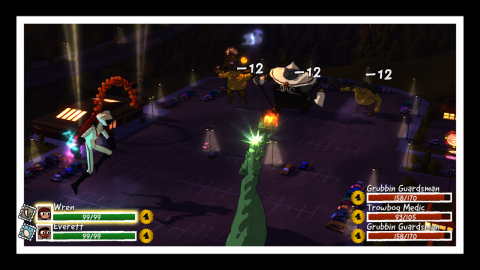 The game casts you as your choice of Reynold or Wren, twin kids trying to enjoy a night of trick or treating. Things quickly go wrong as a witch named Dorsilla sends out an army of monsters to steal candy from the entire town, planning to do something vaguely evil. The twin you didn’t pick gets kidnapped, mistaken for a giant candy corn because of their terrible costume, and you have to set out and save them. Along the way, you get help from a Dungeons and Dragons nerd named Everett and a girl obsessed with science named Lucy, not to mention a wide swath of costumes to give you powers in battle. 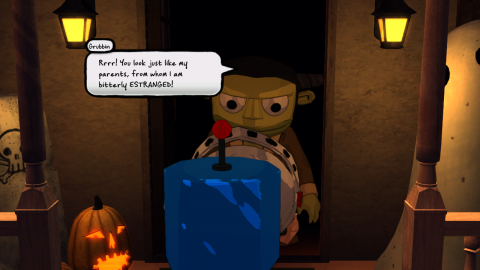 Costume Quest is very much a Japanese-style RPG, with turn based battles and input based moves and blocking (ala Super Mario RPG). The twist is that all of your party have the same base stats. What sets them apart is the costume they choose to wear. When a battle starts, the art style shifts and the kids become giant versions of their costumes, with a wide selection ranging from giant robots and vampires to the statue of liberty and a french fry crab (which is one of the more useful costumes). Every costume has different stats and a different role to play in combat, like the knight’s special that grants a defensive bonus for a few turns, or the pony’s resurrection power. While the twins, Everett and Lucy never really change outside of max health, the costumes they wear allow different tactics and combinations, especially as turn order is fixed and based on where a character is in the party line-up. 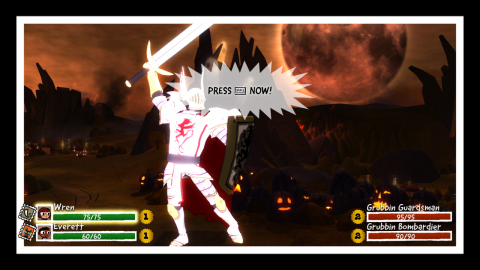 There isn’t too much depth to this, mind you. Characters gain access to their costume special after two turns, then can unleash it or save it for a better time, which only really applies for support and healing powers (outside the last boss of the Grubbins on Ice DLC). When you get a damage dealing power, you use it to end things faster, and there’s almost never a reason not to. The game also doesn’t carry damage over from battles, so you always start a fight at max health. Losing has no penalty, it just means you have to try again to continue. There are also the battle stamps, which grant bonuses and even new moves when equipped. These can break the game, especially the egg power that stuns enemies. Just use that one attack for all non-boss fights with the last character in your party and you can breeze through almost the entirety of the early campaign with enemies barely able to fight back. There’s generally poor balancing until the Grubbins on Ice DLC campaign, which comes with really interesting new costumes and stronger enemies. 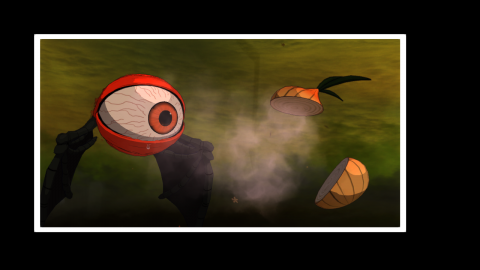 This might actually be one of the game’s most unexpected strengths, though. It’s a short title with simple mechanics and very minimal strategy, the sort of thing a young kid can figure out fairly easily. The game’s entire look and style also screams childlike. The world exploring segments look like they came from a child’s story book, and the battle portions carry a very comic book style to them that can get away with more (like the little flesh dangling from the back of the eyeball costume in Grubbins on Ice), but generally stay in a kid appropriate Halloween look. There are adult jokes in there, but they will fly right over a kid’s head. Costume Quest is the perfect game for a parent and child to play together, something to introduce a kid to the world of RPGs and entertain the older set with its charm. Even the exploring mechanics back this up, with simple maps based on real world sort of locations, simplistic puzzles designed around costume powers, and the ability to hit anything in the area to try and find extra candy. Simplicity is what gives the game its unique charm. 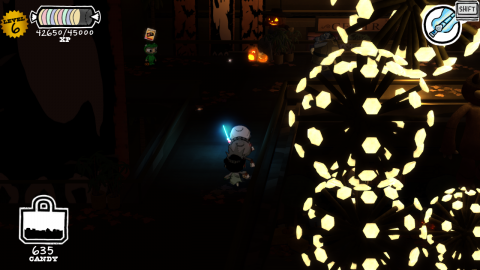 A lot also must be said for the clever but lighthearted writing, the one area where Schafer contributed. Enemy dialog paints them as goofy, non-threatening dolts or people just trying to make a living, kids with magic costume powers be darned. Adults are completely oblivious to all the wild stuff going on, while kids make costume puns or comment on how they’re wearing a costume ironically. Everything about this world is inviting, even the true big bad, who turns out to be an overweight grim reaper with a sweet tooth. It’s just so silly that it’s hard not to smile with the game. Plus, it’s one of the very few video games with an Arrested Development reference (keep an eye on the kid dressed in a banana suit). 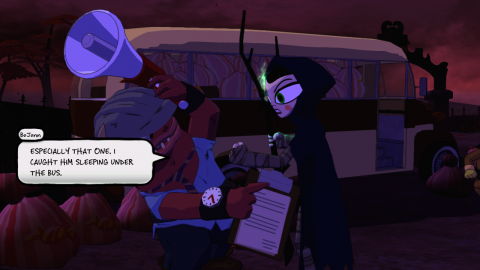 The DLC ends with a cliffhanger, promising adventures in multiple dimensions, but it would be a few years before the promised sequel finally arrived. When it did, it aimed to improve on every single aspect of the previous game, while throwing in a few unexpected curve balls.