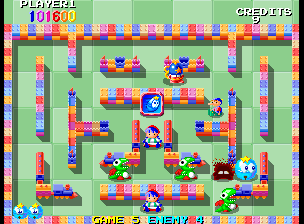 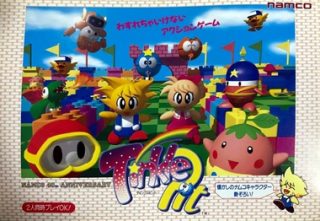 Namco has always been eager to keep its arcade classics like Pac-Man, Dig Dug, and Galaga in circulation, but the company’s more obscure titles aren’t as lucky. Released exclusively in Japan in 1993, Tinkle Pit has never been re-released or localized anywhere else, which is unfortunate since it’s a perfectly enjoyable game and a love letter to Namco’s arcade history to boot. 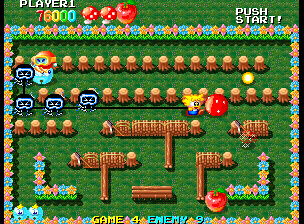 As Pit and Patty, two kids on a mission to solve the mystery of the curse that has befallen Tinkerland and turned its people to stone, your weapon of choice is the Tinkerball, a large bell attached to a string that can be set down and then returned to its user, destroying any foes caught in between. While you can take foes out one at a time with it, taking out multiple foes in one go will increase the amount of points you earn at the risk of prolonged exposure to danger, rewarding those who choose to play boldly. Power pellets straight out of Pac-Man can also be picked up and thrown at enemies, allowing you to catch fleeing targets or defend yourself from the front.

Tinkle Pit encourages players to move with purpose and plan out the most effective routes, since you only have a limited time to defeat the many foes that crawl amongst its 47 mazes. After a short period, any remaining enemies will run away from the player and then flee the stage entirely. Letting enemies flee doesn’t negatively affect the player in the moment, but it will reduce the points given by the “Pursuit Bonus” at the end of the game for each enemy that manages to get away. Another factor that determines the way you approach each level are the items that litter each maze. Each of the eight worlds has a different theme, which in turn affects the affects the appearance of the scoring items that spawn in each level. Identifying these and working your way to them quickly is important for maximizing your score, since you won’t have much time to grab them once the last enemy is defeated or flees. There are also power-ups to make things easier, including a speed boost, the ability to make your Tinkerball and stun foes, and even a particularly special power-up that transforms you into Pac-Man himself, allowing you to munch up everything in sight. 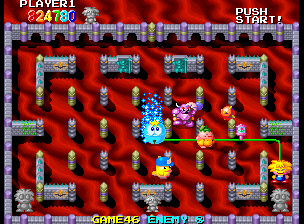 Those fond of Namco’s arcade output will find plenty of tributes to appreciate throughout the game. You’ll regularly deal with Pookas and Fygars from Dig Dug, you can pick up the flags from Rally-X for points or an extra life, and the four iconic ghosts that love to harass Pac-Man show up to haunt you here as well. There are even references to deeper cuts within Namco’s library, such as an entire world dedicated to Namco’s Japan-exclusive arcade puzzler Emeraldia, which is fitting considering both games were composed by Yoshie Arakawa, designed by Kohji Kenjoh, and were the last two releases for Namco’s NA-1 arcade board. All of these crossovers are complemented by lovely 16-bit visuals, bursting with color and expressiveness that gives the game a fairytale-like feel.

While Tinkle Pit is simplistic at its core and easy enough to finish (aside from its surprisingly intense three-phase final boss fight), every aspect of the game works in unison to reward mastery in a way that exemplifies the “easy to learn, hard to master” mentality that the best arcade games are known for. Tinkle Pit is part Pac-Man, part Bomberman, and another great example of the timelessness of the maze genre.