The Rocky Horror Show is one of the most amusingly insane musicals ever conceived (at least for the first ten or so times you watch it. Eventually, even it gets old). Astonishingly, whenever someone makes a video game out of the franchise, things somehow manage to make even less sense. Well, not initially. When the CRL Group first released their adaptation for the ZX Spectrum and Amstrad CPC, it was rather boring, so let’s focus entirely on the Commodore 64 version. Either Brad or Janet, depending on the player’s choice, sets out to save their petrified fiancee before the mansion takes off into outer space. Whoever is helplessly confused right now: reading this review without having watched the show or the movie is just as enlightening as playing the game without having watched the show or the movie.

All the known Transexual Transylvanians – and Eddie – run around the mansion like crazy, and as soon as Brad bumps into them, they suggest to do the time warp again (whose music plays constantly through the whole game) and strip him stark naked, so he’s just barely able to cover his crotch with his hands. That makes it seem oh so much more inviting to play as Janet…

After that, the clothes are dropped somewhere around the house randomly, and the distressed couple has to find them before going on. After all, how are they supposed to pick up the necessary parts of the Medusa Transducer when they have to shield their private parts with their hands? Those are also dispersed randomly, and the difficulty experienced in solving the quest in time almost solely relies on finding their location. If fortune laughs upon the player, the game can be completed within a few minutes; in less favorable cases, it’s neigh impossible. It’s also a really dull and bothersome task, because both heroes can only ever carry one part at any one time, which they have to drag to its socket, leaving any other pieces along the way for later backtracking.

Not all of the inhabitants desire to do the time warp again, though. Riff Raff is awfully trigger happy with his ray gun, and Eddie just runs people over with his motorcycles – standing in the way of either results in an untimely death. And in the unlikely event one happens to encounter Frank-N-Furter in his room, wild animal off-screen sex ensues, and one wakes up locked in a dark room full of free-floating drug symbols. 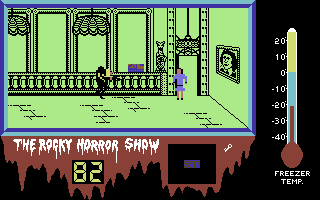 Nothing more from the original plot is left, but the mansion is actually drawn astonishingly faithfully, which is extra surreal on the C64 where the platform-typical blocky colored characters are mixed with the detailed monochrome backgrounds from the Speccy.

Just for the record, the major differences in the Spectrum and Amstrad versions: the characters are as monochrome as the backgrounds, items are not randomized, and all the Transexual Transylvanians wait quietly in their rooms until the player enters, making the mansion feel deserted and boring instead of frantic and insane. The Rocky Horror Show is also one of the few C64 games that have a dedicated C128 counterpart, with completely redrawn graphics (including the backgrounds) and individual lines for all inhabitants of the mansion, but it runs extremely slow.