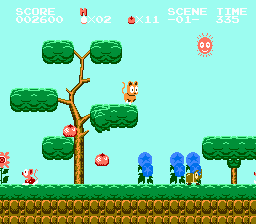 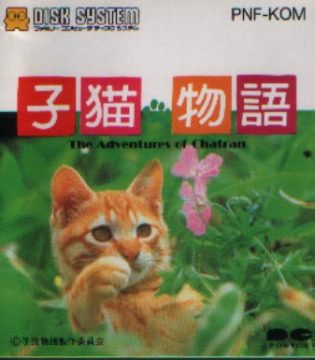 The publisher Pony Canyon had a reputation for making terrible games for the Famicom, and Koneko Monogatari is no different. Like many terribly programmed games for the platform, it features sluggish scrolling, awkward physics, boring level designs, and music seemingly composed with little thought to how it might actually sound to the human ear. To be fair to the game, it is sort of adorable – you play as a cute, wide-eyed kitty cat as he walks forward and jumps over stuff. Said stuff include pants-wearing mice, beetles, and fish that appear to have been sprite-ripped from Super Mario Bros. Even the clouds, which leak drops of watery death, appear with bemused grins. In the upper right corner of the screen, there is either a sun or a moon, each smiling down upon your journey. Unlike many platformers, Chatran can’t kill enemies by jumping on them, but instead must ruffle through various trees branches to find items like apples and eggs. (They can also suddenly spawn beetles, spelling your demise.) The only way to kill enemies is by jumping over them and dropping eggs on them. There are only two level themes – night and day – which cycle over and over, although the level designs are different. To be sure, this game is not enthralling. 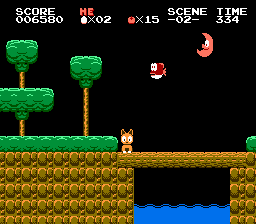 So this is a bad game, but what sets it apart is its license. Yes, “licensed games” and “awful” share common ground on the great Venn diagram of video game canon, but most licensed properties during the mid-80s were aimed squarely at boys. Koneko Monogatari (which translates to “Kitten Tale”) is the original Japanese name for the movie known in America as The Adventures of Milo and Otis, wherein two talking (sort of) animals take on an adventure through nature. This obviously has a wider appeal than the usual shounen manga and anime properties, thus giving it some appeal to girls, or perhaps even the whole family. But what a terrible experience it must be to be someone playing a video game for the first time, starring an adorable little kitty cat, and then happen onto this shoddy trainwreck. This may not have been first such instance – the Famicom also saw games based on Licca-chan, the rough Japanese equivalent of Barbie – and it certainly wasn’t the last, but it’s a really depressing thought, especially since this seems like the sort of thing that would make a likely present from a clueless relative.