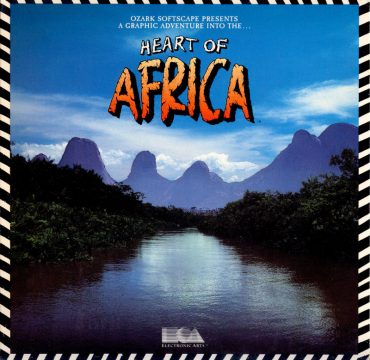 The Commodore 64 exclusive Heart of Africa looks superficially like Seven Cities of Gold. The game is kind of a sequel to the previous title, although it’s set 400 years later and on a different continent. The gameplay is a mixture of new and familiar – it often feels similar but it’s obvious that it’s not just a reskin of Seven Cities.

Instead of a conquistador during Age of Discovery, Heart of Africa places the player in the role of another adventurer archetype: an archeologist during the Scramble for Africa. This time, the goal is clear: find the lost tomb of the fictional pharaoh Ahnk Ahnk. This, of course, creates a difference in the game’s scope: while the conquistador was backed by the Spanish royalty and could easily gather a small army, the archeologist is a scientist who travels alone and without too much funds. Thus, conquest is not even an option and resorting to violence is usually not an advisable option. 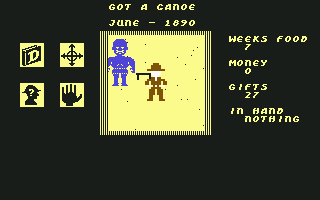 The game’s manual reveals a backstory in which the protagonist will inherit the estate of a Livingstone-esque explorer called Hiram Perkins Primm, but only if he’s able to find the tomb of Ahnk Ahnk before December 1895. It also contains information essential for completing this quest, like meanings of certain (fictional) African words and information about the different native tribes. Most of it is told through in-universe correspondence and Primm’s diary, which makes the whole thing much more immersive – just like its predecessor, Heart of Africa strives to create a living and believable world.

When you start playing Heart of Africa, your character arrives to Cairo in 1890. There it is possible to buy some helpful items in various different shops, pay for a ferry ticket and save the game. The ferry allows for quick travel between the port cities, which serve a similar purpose as Spain in Seven Cities of Gold – you go there if your resources are running out, you need cash (you’ll get a wire transfer if you explore enough of the continent) or gifts (this is how you pay for things outside of port cities), you get sick or just need to save your progress. They are the game’s save spots and of course you’ll often be quite far away from them when you need them most.

Once again, most of the game is spent exploring. Different kinds of terrain take different amounts of time to cross, but now those penalties can be reduced by equipping correct items: machetes for the jungle and ropes for the mountains. The game is actually heavily item-based, a bit like Tower of Druaga before and Legend of Zelda a few years later: drinking from the canteen can help you survive a trek through the desert, equipping a shovel makes you dig out hidden items and carrying a weapon increases your chances of surviving dangerous encounters. The latter are never shown – like dialogue with NPCs and the discovery of important landmarks, they’re relied to you through the pages of the main character’s diary. In addition to equipable items, the archaeologist can also carry a canoe which slows him down on land but allows him to travel through the rivers (you can also go swimming but results may vary). 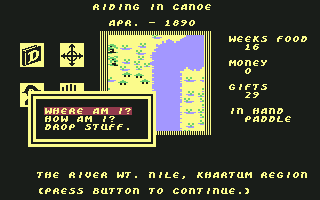 Like Seven Cities of Gold, Heart of Africa involves interacting with the natives. This happens in the villages belonging to different African tribes, which are smaller than port cities and usually only have one or two shops. On the other hand, they always contain a chief’s hut – the only place where you can get hints about the location of hidden items and the tomb. You can get those informations from the chief by either giving him gifts and items or by threatening him with a gun (which sounds easy but it’s actually a bad idea, as it blocks access to any building in the village on subsequent visits).

While the game’s atmosphere is almost as good as that of its predecessor’s, it’s unfortunately even more tedious at times. Fast movement is necessary given the time limit, so you’ll want to only carry a canoe when travelling up or down the rivers. Your inventory is quite limited, thus you’ll be going back and forth between the villages and stashes frequently. Getting hints from chiefs requires either giving them a lot of gifts or giving them a precious item they like (you can find out who likes what in the manual) while being careful not to give them something they dislike, as this leads to them not wanting to talk to you. The hints are either about the tomb or about stashes of precious items and they refer to various landmarks while using strange (fictional) terms for directions. Sometimes it’s easy to decipher (e.g. “where Senegal tastes the salt” refers to the mouth of Senegal River) but good luck guessing what “from the birth of Mongdamara to its first fork and not utomba halfway to the next water” means without digging into the manual.

This brings us to another point: Seven Cities of Gold was an edutainment game with only a minor purely fictional element of a lost city hidden far from anything else on the map. Heart of Africa uses a real historical map and places the tribes where they actually lived, but everything else is made up – the languages, the tomb, the preferences for various items in different regions. It also completely ignores the fact that the game takes place from 1880 to 1885, during the period of intense conquest and military action in Africa. You never meet any Europeans in the game, let alone witness any sort of battle. Funnily enough, this problem could be easily solved by making the game take place just ten years earlier.

That is not to say that all changes from Seven Cities of Gold are for the worse. The diary entries are well-written and bring more personality to the game, while its smaller scope and focus on solving the mystery by searching for clues is a nice take on the adventure genre that doesn’t rely on weird, illogical puzzles. The replacement of random maps with randomizations of the location of stashes and the tomb might not be the most welcome change but it was probably the only way of introducing randomness to this kind of game (there’s an ongoing attempt at making a narrative-driven game set in a procedurally generated world with Ultima Ratio Regum but that is being developed for computers much more sophisticated than the Commodore 64). 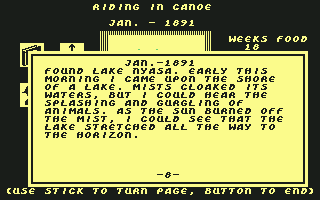 Seven Cities of Gold and Heart of Africa are oddities among Berry’s games: they’re both non-competitive single player titles, while the latter is also an adventure game with a clearly set goal and a lot of scripted events. They’re also both fairly unusual, with mechanics that emphasize exploration over a strict progression. Heart of Africa may have victory conditions, but achieving them still requires exploration of a large world. There is a noticeable difference in quality though – Seven Cities of Gold is less restrictive, a bit less tedious and much better researched.

Both of those games are definitely worth playing as there are not many titles that can make you feel like actually discovering unknown lands the same way Seven Cities of Gold and Heart of Africa do. Sid Meier’s Pirates and Colonization strike a similar chords, and the indie title The Curious Expedition (in early access at the time of this writing) takes a lot of inspiration from Heart of Africa, although it breaks the game down into several smaller scale expeditions on random maps. Those games deserve to be remembered, and it’s a shame that the DOS remake failed to rekindle people’s interest in them.

Links:
Scans of the manual at C64 Sets
Heart of Africa at C64 Wiki