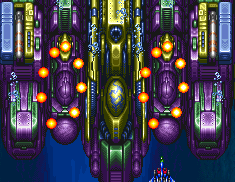 Batsugun marks both an end and a new beginning for the shoot-em-up genre – it was the last shooter developed by Toaplan, but it’s basically the birthplace of the “bullet hell” subgenre, containing many of its elements that were expanded upon in later games like Donpachi and other games by Cave. The most prominent aspects are, of course, the practice of filling screen with over a hundred bullets at once, as well as shrinking the hit box to accommodate for the massive about of fire. It also uses human characters as pilots, which had become standard practice in many shooters at this time. Almost all of the same people who made this game went on Cave, including programmer Tsuneki Ikeda and artist Junya Inoue. 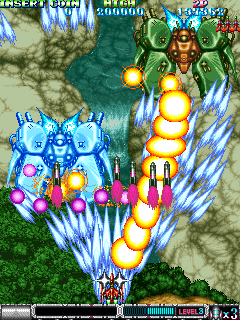 Batsugun‘s storyline involves an alien force attacking earth. An elite mercenary group called The Skull Hornets is sent in, who have special ships that can both fly underwater and into the stratosphere. There are six main characters in total, although there are only technically three different variations, with two types of each to accommodate for two simultaneous players. Ship A is called the Sky Mirage, Ship B is the Dragon’s Whisper, and Ship C is the Judgment Flasher. Each is focused on range, power, or a mix of both. All are equipped with the usual assortment of single-use bombs too.

Jeeno is the Player 1 ship A character. He has cybernetic enhancements that make him better at flying. He wears a shirt that has the words “A New Hope” emblazoned across the chest, possibly a Star Wars reference. The ship itself is a spread shot taken to its extreme, spraying the screen with over 100 bullets and missiles in just a single attack at his highest level. Mashing the attack button makes this continuous.

The player 1 ship B character. Beltiana’s brother was killed by the aliens and is hoping to avenge him. Ship type B shoots a powerful electric laser that gains circular sub shots and homing capabilities later on. You can mash the fire button to shoot powerful sparks of energy rapidly. Fully leveled up, it looks suspiciously like a Vic Viper from Gradius.

The Player 1 ship C character. Iceman is a self-parody of Joker Jun, as he always wears his sunglasses even indoors and at night. He is supposedly one of the greatest pilots in the world and is partially aware that he is in a video game, bragging about how many credits he can beat the game on. His ship functions very similar to the ships in Donpachi, having a spread out attack by tapping the fire button and a powerful, focused attack by holding. His ship does not slow down when using this attack, however, so it can feel pretty weird to use him if you are too used to Cave’s series.

The player 2, ship A character. Schneider was the main character from Toaplan’s 1987 shooter Sky Shark and was cryogenically frozen until he was needed. He is always dressed like a cowboy and acts very typical of old men in popular culture, complaining about how much better everything was when he was young and using his old tactics to blow up the new stuff.

The player 2, ship B character. Alteeno is the Skull Hornet’s top mechanic and a good pilot too. Her hat seemingly has gibberish on it, but if you look closely it says “ATOLANP”, an anagram of Toaplan.

The player 2, ship C character. Olisis is the founding member of the Skull Hornets. He always wears silly looking armor wherever he goes and carries a rose with him. Olisis is the former prince of the invading army and has rebelled against his father because he knows that invading earth and killing billions of people is wrong. He may not look much like an alien, but his eyes are purple, which is enough for most people. 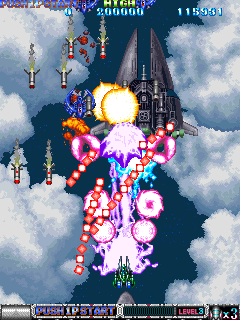 Batsugun contains an experience point system where each enemy is worth a set amount of experience, with bosses worth 100 points while smaller enemies are only worth around 3. Once enough experience is collected, your ship levels up. There are only three power levels, and once you would level up at maximum power, you instead get a screen-clearing bomb. Experience is really easy to get, as you’ll probably be fully powered up by about the halfway point. At level three, you typically spew out just as many bullets and have just as powerful attacks as most of the bosses, but that does not make the game particularly easy. The gun can also be upgraded five times within each experience level. When you die, you lose these upgrades but keep your experience level, so you always have some minimum baseline of power. If playing in two-player mode, there’s also a “double bomber” when both use bombs at the time, which create a super explosion three times as powerful as regular attacks. There has five stages in total, most of which are quite brief, and there’s only one loop. 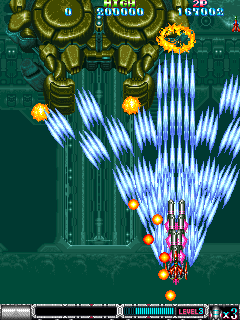 The scoring system is fairly straightforward. involves collecting large, golden Vs (for Victory, assumedly) after large enemies are destroyed. Additionally, pigs are hidden all over levels and finding them also grants extra points.

The world design is fairly standard, though there are some cool level ideas, like the first level taking place entirely underwater, before surfacing and continuing over the sky. The art art and music are fantastic, making it Toaplan’s best looking shooter – an impressive feat after the phenomenal V-Five and Tatsujin Ou. Junya Inoue did a spectacular job on the art, putting forth some of his best work at the time. 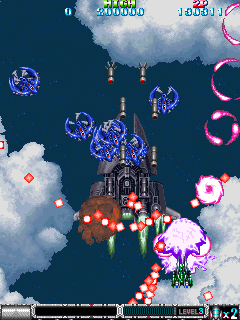 The soundtrack, by Yoshitatsu Sakai, equally good. The theme for Stage 1, “Heart Beat”, deserves special mention, as it’s surprisingly laid back for a shoot-em-up song but sets the stage for the game perfectly. Another one of the best songs is “A Feeling”, which accompanies the fight against the towering battleship Jupiter. The song is dark, menacing, and fit the mood perfectly, that you are up against a truly powerful opponent.

Toaplan released a “Special Version” of Batsugun with some different mechanics. Due to the company’s financial situation, it only found its way into arcades during location tests. This arranged mode which is meant to be played for a longer period of time, as the difficulty starts out a little lower, but ramps up over the course of four loops, where the original version only has one. It also adds suicide bullets in later loops, more scoring opportunities, different enemy behavior, a shield that lets you take a single hit before getting killed, the ability to use the double bomber in single player mode, and a slightly altered color palette. 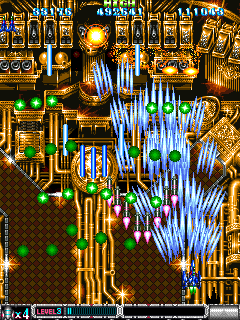 Like most shoot-em-ups at the time, Batsugun for the most part, stayed in Japan. It received a European release, but only for arcades and with a poor translation. Unlike many of Toaplan’s later games, it was released on Saturn with a number of enhancements. It was ported by Gazelle, which consisted of some old staff from Toaplan, so they knew what they were doing. It includes both arcade versions in nearly arcade perfect form, although it does remove some of the slowdown – whether that’s good or bad depends on how much you value arcade accuracy. The Saturn version also offers both the arcade soundtrack and an arranged soundtrack as redbook audio, the latter of which is sadly rather weak.

On the surface, Batsugun might not seem much different from many other early/mid-90s shoot-em-ups, but it’s the ultimate refinement of the work that Toaplan had done over the past decade – it looks great, sounds great, and almost perfectly tuned. It also represents the halfway point between the classic shooters of old – like Raiden and Toaplan’s other entries – and the danmaku shooters that came to dominate the shoot-em-up scene in the subsequent decade. As a result, it’s not quite as overwhelming difficult as the more developed games in the genre, making it an excellent entry point for those who find Cave’s games too overwhelming.

Junya Inoue also wrote a manga to expand on the plot, published in Game Hisshou Guide Magazine, however, it was not completed during its initial publication run. However, in 2017, a compilation book called Truth Story Batsugun was published, compiling all of the previously done manga, some chapters self-published by Inoue, and some new chapters finishing up the story, along with assorted other revisions. Also included is some artwork, interviews with the developers, and a music CD containing the full arcade soundtrack and a boss medley arrangement by Shinji Hosoe.