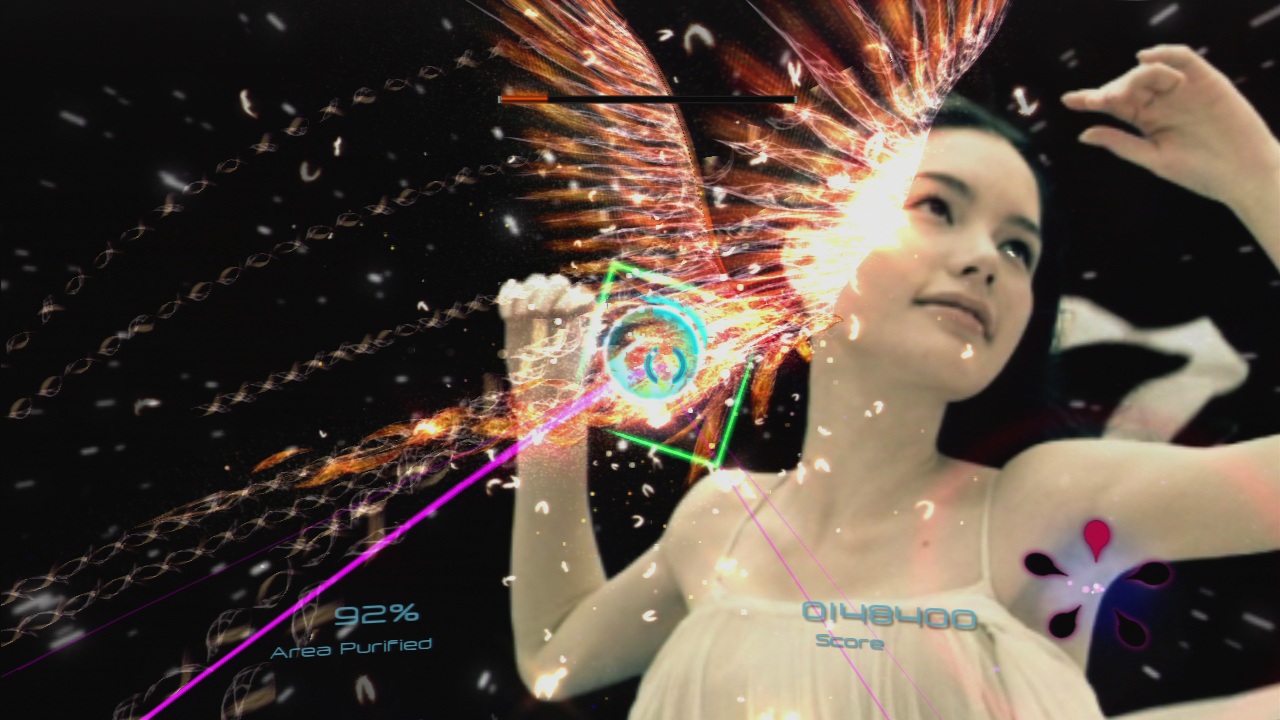 In 2001, Sega and United Game Artists published Rez, a rail shooter that combined graphics and audio into a dazzling experience that was unlike anything before it. While not a gigantic commercial smash, it quickly gained a cult following, enough for it to be re-released on the Xbox 360 in 2008, and a further enhanced version found its way to other platforms in 2017. Between these ports, there was a pseudo-sequel released in 2011 called Child of Eden.

The game works more or less the same – you fly on a track through gorgeously rendered visuals while aiming a targeting reticle, shooting down things that may harm you. A subtle alteration in Child of Eden is the change from a third-person perspective to a first-person one, though it doesn’t significantly alter the gameplay. The game was advertised to push each platform’s motion-sensing device – the Kinect for the Xbox 360, the Move for the PlayStation 3 – though the standard controller works just fine. Newly added is a secondary fire option, which is only effective on enemies or projectiles that are purple colored. Locking onto eight enemies (the maximum number) before firing will grant you a bonus – if you fire in tune with the beat of the music, you’ll increase the score multiplier, up to 8x. 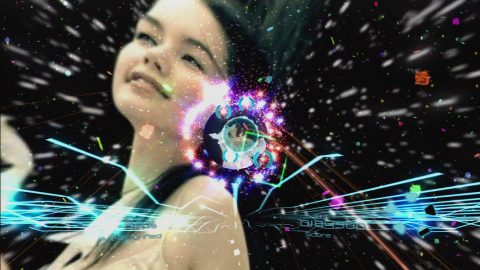 In spite of the obvious similarities, Child of Eden is not “Rez 2”; indeed, it’s not listed in the title (though it is mentioned on the back of the package). It might be for copyright reasons – while Sega initially published Rez, Child of Eden was published by Ubisoft. This may not necessarily apply though, since subsequent ports of Rez were released without Sega’s involvement. But this may also have been intentional on the developer’s part, to indicate they are separate games, because the general look and sound is much different. Neither game places too much of an emphasis on story, but players of Rez may remember that Eden was the AI you were meant to be saving. Child of Eden is meant to be a prequel, showing the AI’s creation, so there is a direct albeit loose storyline connection between them.

Understanding the new aesthetic here requires going back several years before the production of Child of Eden. Back in 2003, due to internal reorganization, Sega shuttered United Game Artists, and studio lead Tetsuya Mizuguchi departed to start his own company, called Q Entertainment. Their first release was a puzzle game called Lumines, released for the PSP. While the game itself was not all that similar to Rez, it did share the game’s melding of gameplay and musical rhythm elements. Mizuguchi also helped create a virtual band called Genki Rockets, whose first single, “Heavenly Rockets”, appeared in Lumines II. The band’s fictional frontwoman is “Lumi”, a 17-year old girl purportedly to have been the first human born in space, in the (then) future year of 2019. She is played by Rei Yasuda, herself a singer and model that went on to have her own separate career in 2012. 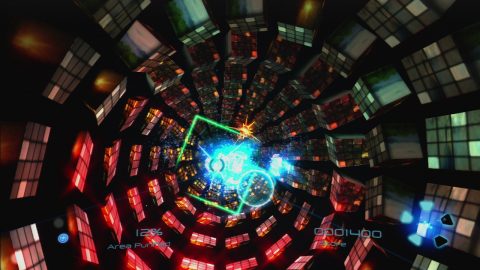 Child of Eden‘s first level is a spiral of empty cubes, who light up as your shots fly by them – it’s impossible to look at this and not be reminded of Lumines. Subsequent areas also love tossing cubes and other angled, rectangular shapes, and using hundreds if not thousands of them as building blocks to create larger objects. But the art is just as obsessed with bioluminiscent flora and fauna – the second stage has you shooting gem-encrusted space-whales and a phoenix that almost seems made out of glass, while the third puts you in a seemingly infinite ocean corridor, which eventually blooms with flowers. It’s all so beautiful that you might feel bad actually shooting at them. The fourth begins with the separation of two cells, which begin to collide with each other, before then eventually evolve into human-like figures and begin fighting. There are certainly some moments like these that recall scenarios in Rez without outright stealing from them. Many levels end with the visage of Lumi, though her appearance as a lifelike FMV figure is a little jarring against all of the digitally produced visuals. Regardless, everything looks as dazzling now as it did when it was released in 2011, and it runs very smoothly at 60 FPS (with occasional dropping), owing to the technical expertise of the programmers.

Child of Eden was a critical success, but sales-wise it was a flop, with the title deeply discounted within just a couple of months. The broader consensus is much more divided, as while it still has a devoted fanbase, it never quite entered the popular gaming subconscious in the same way that Rez did. 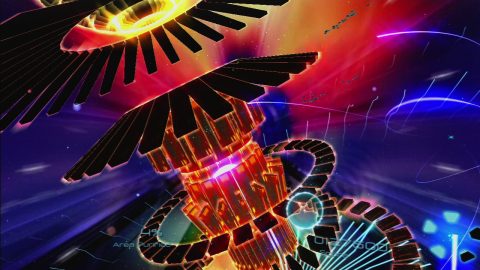 Its frustrating structure is a mark against it. There are only five levels altogether, with each taking about ten minutes to complete. It’s not just enough to beat a level and move on – subsequent levels need to be unlocked with stars, which are granted based on your end-of-level rank. Assuming you’re playing normally (i.e. shooting as much as you can but not really taking advantage of the scoring system), you’ll probably end up with two stars at the stage end…but that usually isn’t enough to unlock new stages, so the only recourse is to go back and replay one you’ve already finished. You don’t even need to obtain a better rank to get more stars, you just need to play it again. It’s a really dumb roadblock, because the effect of each stage is completely diminished when you’re forced to repeat it, especially since nothing really changes. This seems to have been the point, that the player would step away from the game for a bit to pick it up again later, in order to prevent beating it in one sitting. But it does little to actually extend the game – what would otherwise take about an hour now takes two or three, except that extra time is spent in needless repetition.

Another minor issue – due to the first person perspective, it has the negative effect of being unable to tell where your “hitbox” is and so projectiles seem to damage you before they really seem to reach you. It results in a game that feels a bit more difficult than its predecessor. It also means it’s missing the cool forms that your character would undergo in Rez, based on your health meter.

Objectively, these are Child of Eden‘s only real flaws. Subjectively, it’s a little tougher to gauge. Both this and its predecessor really are “art over gameplay” sort of deals, and those only really succeed if the visuals (and music) resonate. Rez has a very distinct style, with its singularly colored stages against the dark backgrounds. Child of Eden is beautiful…but also doesn’t quite have the same personality, either. Rez has a soundtrack very much of its time, of the late 1990s/early 2000s electronic scene, while Child of Eden is a bit poppier, since every stage can be taken as an interactive Genki Rockets music video. Rez has stages broken into discrete sections that evolve as you travel through them both visually and musically. Child of Eden‘s stages don’t function the same way, and while some stages are connected visually and thematically, others are rather arbitrarily assembled. The soundtrack changes with each section, but it doesn’t have the same development, and the climax usually involves the introduction of vocals, which makes for a substantially different sound. 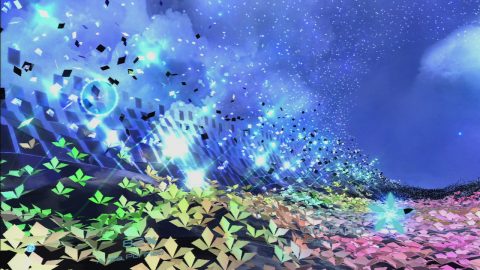 That sense of build-up, or rather the lack of it, applies to the whole game. Rez was always impressive but kept its best moments for the final stage – whenever anyone gushes about the game, it’s usually about how amazing Area 5 is, as well as the final encounter. Conversely, Child of Eden dazzles pretty much from the get-go, and it maintains that level of wonder through all of its stages (only deflated by the necessary replays). You wouldn’t think that “this game is continually amazing” would be a problem, but without any sense of climax, when the end credits roll, the feeling is less “wow, what an experience” and more “huh, that’s it?”

At the end of the day, pretty much all of this breaks down to “Child of Eden doesn’t exactly duplicate what Rez did”, which is perfectly fine – just doing another one would’ve eliminated the point, but both its overeagerness and its lack of defined structure make it feel just slightly less satisfying. And that ultimately won’t matter all that much if the visuals and soundtrack still click.

Scott Pilgrim vs. The World: The Game