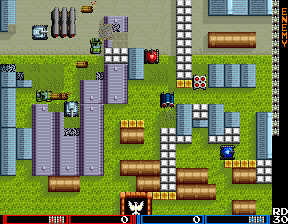 It would take another six years until Namco put out the next installment in the series, developed exclusively for arcades. The last game to be powered by Namco System 1 (which housed some of the late ‘80s hit titles like Dragon Spirit and Splatterhouse), Tank Force adopts the framework established in Battle City and ups the ante exponentially.

The crux of the gameplay is about the same, but comes with many bells and whistles, as expected from a jump to much more powerful hardware. Power-ups, now spawning automatically on field, include an array of items that grant temporary armament upgrade, such as shrinking the size of your tank for smaller hitbox, or a wave beam that goes through walls. The antagonizing forces have new faces as well, including the jeeps that deploy dynamites all over the place, and the huge, armored vehicles that discharge stronger projectiles, quickly dismantling environments around them. 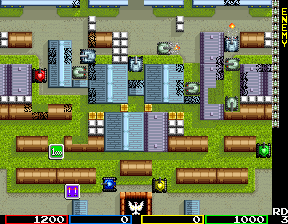 There’re 36 stages in total, about as long as the NES game, and the levels themselves now rotate among a variety of realistic-looking battlefields, instead of the abstract kinds found in Battle City. Every fourth round introduces a boss fight in form of a comically gigantic mechanical fort, like those found in vertical shoot-em-ups. There’s also an actual music to go with this time, pumping out the FM synth as hard as it can.

Tank Force puts focus on the 2-player mode, making many changes to nullify its disadvantage. Friendly fire only pushes you back a bit, instead of stunning you for a few seconds like in Battle City, and your base is immune to ally’s weapon, which certainly helps not blowing it up by accident. There’s also a rarer 4-player version that was only released outside of Japan. The drawback is that the game’s balanced to be much harder to play solo. Enemies can now appear from sidelines, sparing a tighter window to handle them, and it’s difficult to recoup a lost ground once you get killed and revert to a feeble, default form. Some stages are viciously designed in a way your base is exposed to all directions and it takes a considerable distance to travel back and forth, and it’s this point that the game becomes truly quarter-munching without bringing in a friend. 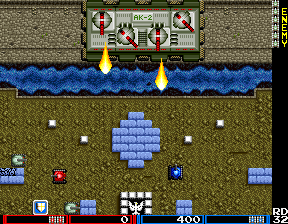 Tank Force marks many checkboxes of what a sequel should be: bigger, fancier, and offering an extravagant tank-wrecking experience that suits it to a T. It does, however, feel like the game doesn’t want to do more than retreading the old ground, especially given the technological gap from the predecessors. Majority of the additions are about iterating the existing mechanics, and thus, the underling fundamental strategy – staying near your base and sniping whatever comes in – has not changed. In fact, with much more aggressive flock of tanks darting in, both in terms of weaponry and numbers, camping is more necessary than ever. A few novel ideas sprinkled here and there aren’t enough to shake up the status quo. The new boss battles look awesome for sure, but in practice, they’re always an assortment of turrets that remain at the upper part of field and never stop launching missiles, so it boils down to racing against clock until they chip away all the objects to shield yourself and the base. It is worth a playthrough for all Battle City fans, but if the gameplay cycle still doesn’t click, the momentum will likely wear off somewhere in the halfway.

The game was first re-released on Wii Virtual Console in 2009, and then bundled in Namco Museum (2017) for Nintendo Switch. This adds a Challenge Mode, which puts you in one of the stages to go for the highest score within time limit. However, it only contains the Japanese ROM even in the overseas release (displaying subtitles to translate what little text in there), so the 4-player mode is unavailable.