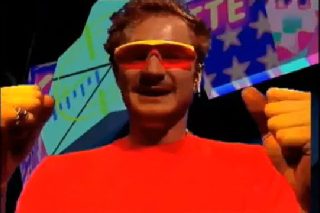 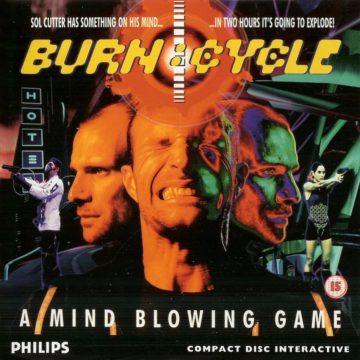 Generally regarded as one of, if not the best, games on the Philips CDi, Burn: Cycle is a combination of a puzzle game and an FMV game, as was the style at the time, similar to the likes of The Daedalus Encounter. It has developed a degree of reverence among retro fans, but in reality, it’s fairly terrible. Many would criticize its extreme slowness, the cumbersome interface, sudden instant deaths, unintuitive structure and crude CG backgrounds, citing them all as reasons for kusoge status. While valid these points don’t really make it kusoge, since the genre by definition is slow and a lot of its other problems are endemic to the era and hardware (it’s especially cumbersome on CDi). Actually, despite being technically terrible Burn: Cycle is at least enjoyable.

No, the kusoge title is because it’s completely batshit insane. Which is precisely why we love it. 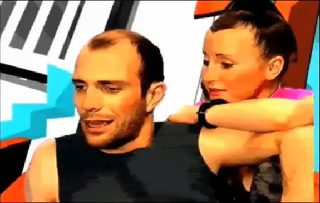 For a game portraying a cyberpunk future it takes itself extremely seriously, but without any of the suspension-of-disbelief that examples such as Blade Runner or Deus Ex achieve. Characters wear clothes which are more like embarrassing exaggerations of the worst the 1990s had to offer, while everyone tries to sound hip spouting pre-internet phrases which mean nothing – oh and did we mention the Z grade overacting throughout? “When God was crapping stupidity he dropped a shitload on you!”

The kitsch monologues of Sol Cutter, the protagonist, make for surreal listening as he prattles on about sharpies having him for every Nigerian Rand he’s got, new age churches run by a golden Buddha, and Puerto Rican pharmaceutical smugglers clashing with women who’d skin you alive in under two hours.

Some of the dialogue can be excused due to the era it was written in, but other equally bizarre things aren’t as easily rationalized. The game contains several useless items you can buy, including pornography you can’t view (titled: “Wet When Slippery”). At another point a security guard arbitrarily decides to go off with the first woman who winks at him – and of course she kills him. Next Cutter and female accomplice Gala are in his hotel room, which appears to have a minibar. Except instead of drinks it’s filled with kinky bondage gear. As she examines some form of harness he blurts out: “Hey, don’t touch those, I get charged for what I use!” They throw badly-acted quips back and forth, but any attempt at sexual tension between the two comes across as cringingly awkward, like a cheap high-school theatrics performance. Later still it gets philosophical, featuring quasi-religious iconography and mad babbling from its actors while Cutter delves inside his own mind. 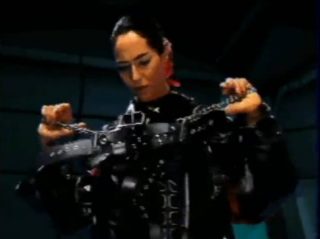 With modern developers happy to regurgitate the same well-worn tropes and cliches, Burn: Cycle could be commended for featuring the above wacky and unique situations. Except the story which holds them together doesn’t really make any sense. Cutter has hacked into and stolen corporate datafiles, resulting in the eponymous Burn: Cycle, a computer virus inside his brain which gives him two hours to live. But after this introductory sequence is a string of poorly written characters who are killed off, introduced, disposed of and double-crossed with haphazard abandon – on several occasions you won’t know how or why he knows someone, or indeed who he’s even talking to. Somehow it all involves digital copies of people’s brains.

In a way this all lends proceedings a kind of schizophrenic charm, like the debut work of an untrained writer or the book report of a kid high on pixie stix. Speaking of schizophrenic, towards the game’s end there’s a gender bending moment when Cutter gets permanently turned into a woman, complete with an actor/actress change, since outside of the Televerse (internet) there’s a moustachioed man cutting the fingers off his original body. Afterwards said antagonist turns his back on female Cutter (why exactly?) despite her pointing a gun at him. Obviously he gets shot. Before you’ve time to comprehend what just happened the game reaches its weird conclusion, with Cutter keen to test out her new anatomy.

Burn: Cycle is a functionally bad game, but for sheer lunatic absurdity it’s elevated beyond the sum of its parts and proves compelling (like all kusoge should be). It’s just not something you want to play with anyone in earshot.