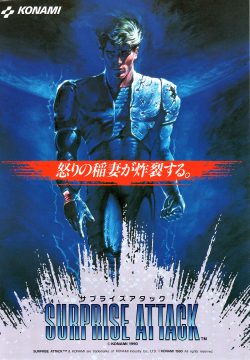 The terrorist organized Black Dawn has taken over a moonbase and its neighboring space station. Only patriotic hero John Ryan, AKA Red Thunderbolt, can save the day. Surprise Attack is basically a Shinobi clone – you shoot at bad guys, jump between levels or backgrounds, and get killed in a single hit – except it’s set in outer space. Instead of rescuing children, you need to find bombs, which congratulate you with an inane “U DID IT” message when you grab one. Weirdly, there’s no close-up melee attack, though you can upgrade to a stronger “grenade disc” to do more damage. When you grab a “hover” power-up, your character becomes temporarily electrified, allowing him to fly around and shoot lightning. 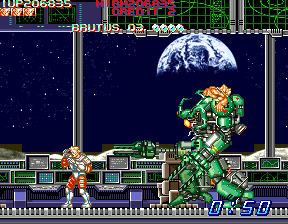 The attention to detail is kind of cool – the hero and the enemies wear helmets when outside but take them off when indoors. Certain areas have different gravity, too, causing you to flip between walking on the floor and the ceiling. The game does have a vague “Gradius” feel, owing to the sound effects and similar music. One of the bosses even looks a lot like an enemy from Konami’s stalwart shoot-em-up franchise, though canonically they aren’t connected. Both the levels and boss fights are varied, as well. Probably the most amusing death in the game occurs if you step onto the launching device on the moon, which will immediately fling you right into the stratosphere. The final boss is basically the loader from Aliens, though colored green in order to seem a little less infringing. The bonus rounds consist of trivia questions regarding both science facts and sci-fi pop culture. These are amusing, especially some of the wrong answers, but the game show-like women on the sides feel particularly out of place. 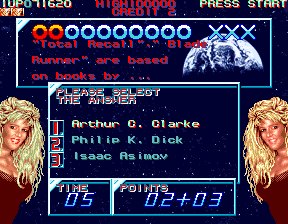 Like Shinobi, Surprise Attack is incredibly difficult. Even though it’s pretty shameless with its inspiration, though, it’s still a Konami game, meaning there’s at least some level of baseline quality.