In a few ways, Konami’s arcade game S.P.Y. feels like sort of a spiritual sequel to Bayou Billy, in that it’s basically a side-scrolling beat-em-up with an occasional diversion. It’s still far from the company’s best, but it’s generally a good deal more playable. In this game, you take the role of two unnamed secret agents taking on an evil organization before they can launch a nuke. The entire thing feels like the James Bond arcade game that never was, and it’s hard not to feel like there must have been some negotiations at one point that fell through. Even the intro feels familiar, with a circle panning around the screen, eventually revealing the main character firing a gun into the camera. 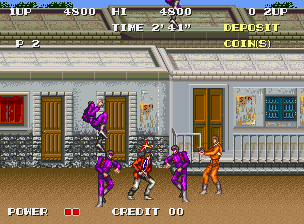 Much like Bayou Billy, the game is split up into a few distinct gameplay styles, although most of them aren’t really as distinct as the genre shifts in the earlier game. The game actually starts with your spy flying a jetpack to the organization’s island in a fun, Space Harrier-esque diversion, shooting at enemies while dodging the rockets enemies fire. Flying on the jetpack is probably one of the most fun parts of the entire game, which makes it kind of sad that it only shows up once at the very beginning of the game.

For most of the game, however, you’ll be on foot, punching and kicking the hordes of faceless goons that approach. For these sections, you’re usually unarmed, relying on a single punch and kick for a moveset. Since most enemies generally die in one or two hits, however, you don’t really need any moves beyond that. You’ll also occasionally pick up weapons like guns and grenades, as well, letting you tear your way through the hordes of jumpsuit wearing goons that much easier. Some of these sections will also put you on a single plane, making you leap up from platform to platform as you clear out enemies. 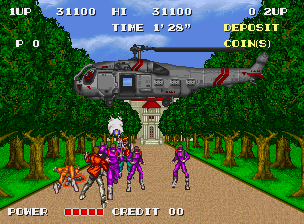 While these sections are generally pretty playable, they’re generally pretty bland. Aside from bosses, you’re generally only facing about three or four different types of enemies, and you’re generally never given enough ammo to make using the weapons that interesting. They’re also generally the points in the game where you’ll lose most of your quarters, as while most of the enemies are easy to take out, the bosses will generally kill you in about two or three hits. Usually because, much like in Bayou Billy, you have to strafe around them and land one hit at a time to avoid getting counterattacked by them, which takes off a significant chunk of your health.

The other major gameplay segment has your spy running towards the screen, while more goons, vehicles, and oddly enough, angry monkeys move towards him. In these sections, most of the enemies will attempt to hug your agent to death instead of shooting him, although some enemies will fire off bombs and rockets that’ll take out your entire health bar when you’re in the blast radius. You also get a few more weapons you can use for these sections, like shotguns and rocket launchers, as well as a screen clearing bomb. These sections are generally a lot more fun, aside from a boss fight with a teleporting ninja that takes far, far longer than it really should. 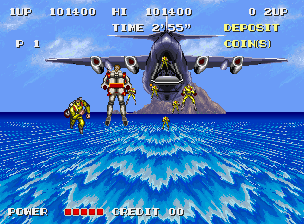 Even with two to three, depending on your outlook, different genres in one game, S.P.Y. tends to get pretty repetitive. There’s nothing really exciting or unique about it, and aside from the shooting stages, it’s about as generic of a brawler as you can find. It is rather short, however. At least, it would be if the game didn’t make you beat it twice to see the actual ending, which probably won’t take you much longer than a half hour, if you’re quick. Much like the game itself, the presentation is pretty boring. The way the screen scrolls forward as you move forward in the shooting stages is pretty neat, although it’s not nearly as smooth as you’d see in Sega’s Super Scaler games. About the only point of interest is that one of the bosses you fight looks a lot like the recurring James Bond villain Jaws. 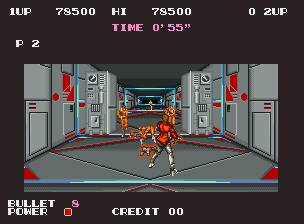 While S.P.Y. is technically a more fun game than Bayou Billy, even if it’s not exactly fair, it’s still not really all that interesting. There’s nothing really wrong with it, aside from being a pretty generic, forgettable game, far from Konami’s best work. Considering it didn’t even get so much as a port to some obscure European computer, Konami probably agreed.