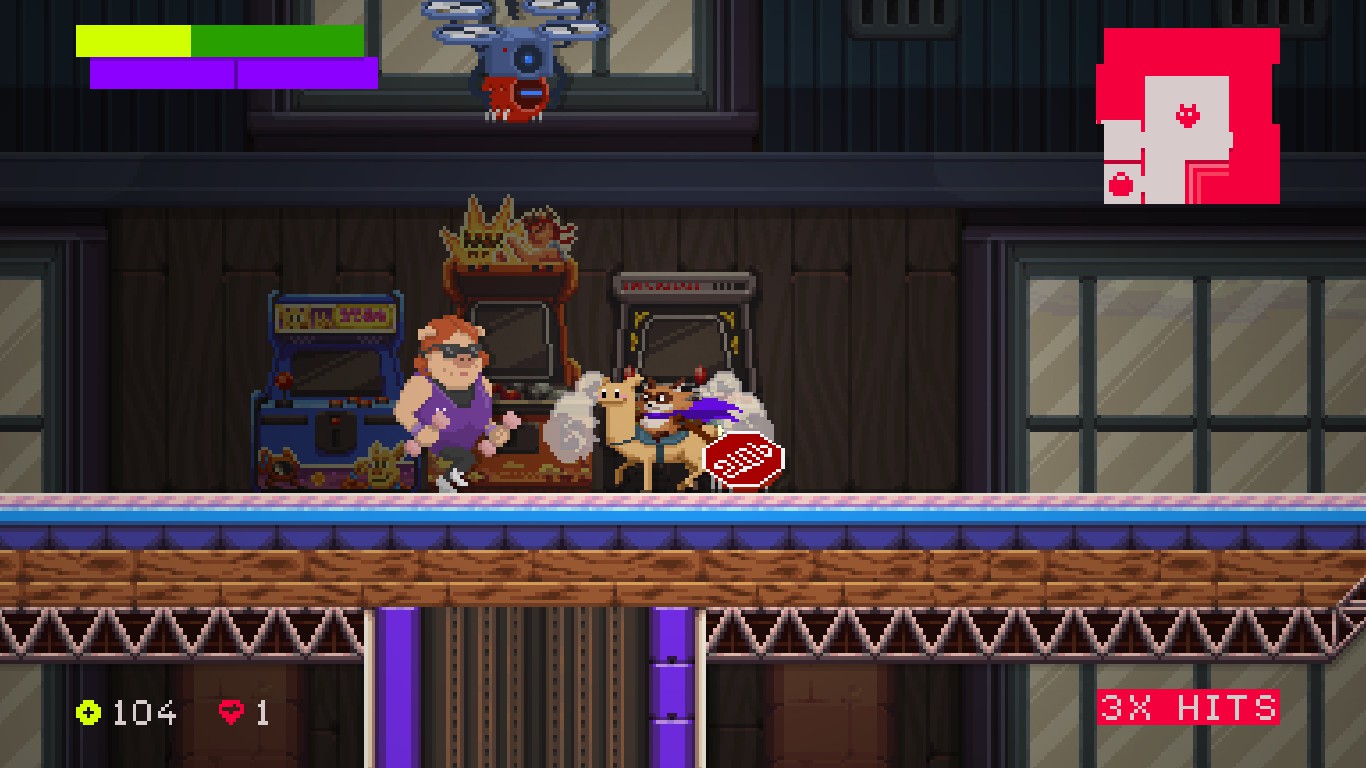 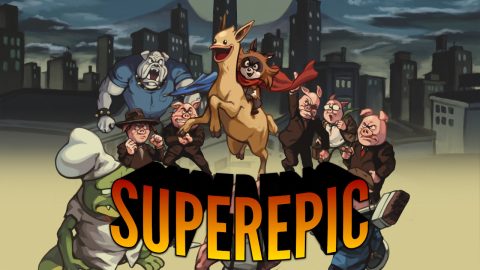 In recent years, Spain’s indie scene has embraced the retro aesthetic and produced several examples of games inspired by 8- or 16-bit titles, and among this 2D revival some of the most popular were Metroidvanias, as titles like UnEpic and Ghost 1.0 can show. Spanish dev team Undercoders decided to combine these two trends with a satire of the current mobile game landscape for their latest effort, SuperEpic: The Entertainment War.

In the game’s setting, a world like our own but populated by humanoid animals, the massive gaming corporation RegnantCorp has dominated the entire market and the world thanks to their addictive apps and mobile games, full of microtransactions and other tricks that brainwash the users. As in every dystopian scenario, however, there is a resistance: player character Tan Tan, a bipedal raccoon, and his loyal steed Ola, a “regular” llama (or at least a creature that resembles one), as fan of old-school games want to restore the gaming landscape by entering the RegnantCorp headquarters and defeating the (literal) capitalist pigs who run the corporation. 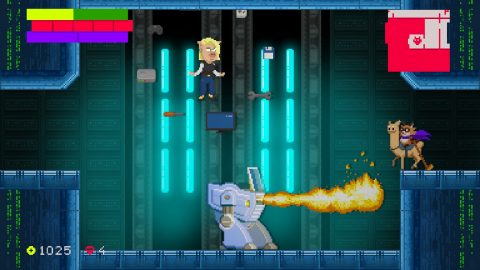 SuperEpic is a classic 2D side-scrolling Metroidvania platformer where the protagonist can acquire moves and abilities that let him navigate the interconnected areas that make up the world map and survive the onslaught of enemies. So far, nothing out of the ordinary, but there is a gimmick that makes it different from the others; more on that later.

Tan Tan and Ola start their adventure in RegnantCorp’s lobby and will fight through several different departments, each one controlled by a boss with an important-sounding title such as Senior Monetization Vampire or Private Data Analyst; the satire element of the game is evident not only in this mockery of corporate world, but also by the fact that among the sectors there’s a leisure area, the development labs, the server rooms, the legal department and… a medieval-style prison where the people who criticize RegnantCorp are being locked. All the areas are quite distinct in style, with good and detailed 16-bit-style graphics, and the eye for detail is evident in the sprites too, with lots of goofy animations that fit the humorous tone of the game. The BGM are quite varied and go from energetic electro-pop to tango, with some highlights like the eerie chants heard in the above mentioned vampire’s area (the track is even called “GardenVania”).

Everyone from hapless salarymen to security guards, scientists, janitors, chefs, engineers (all animals, of course) and also random mechas, blobs and psychics is out to get Tan Tan, but there are also some helpful NPCs. A few pigs are squatting in RegnantCorp’s locales and setting up shop to sell stuff in exchange for two types of currency: money and gems. Money can be obtained by defeating enemies and breaking the safes scattered everywhere, and can be used to buy new weapons, life and stamina enhancements and other wearable items (scarves for Tan Tan and saddles for Ola) that modify stats such as speed and defense. Another vendor in turn can upgrade Tan Tan’s arsenal. Gems are hidden in out-of-the-way spots, and are used to buy special moves that work with button combos, not unlike the ones in fighting games (some of them are even nods to Street Fighter and Mortal Kombat). The whole combat system is in fact influenced by that kind of games: our raccoon has a basic attack, an uppercut and a weaker-but-fast attack that can be comboed and used to make enemies crash one into another, in order to clear the crowds. 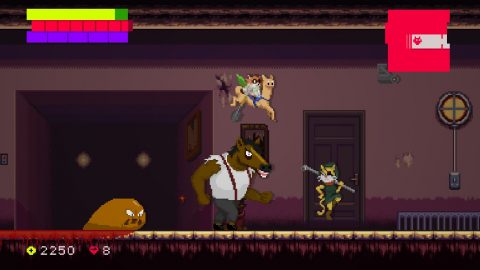 The safes hold not only money but also “relics” that give the abilities needed to progress (the usual double-jump, swimming gear, wall jump and so on), items that enhance stats or give other bonuses, USB flash drives that if inserted in certain terminals will show the points of interest on the map, the keys to the bosses’ rooms or the keys used to open the cells in the above-mentioned prison area. Some of these safes, however, are put in zones that are cordoned off by lasers. And here’s the game’s main gimmick that also ties in with the plot: on the wall of these zones are QR codes that, if scanned with a smartphone’s QR-reading app, will give access to some mini-games that represent RegnantCorp’s “actual” world-famous titles, being played in-game by Tan Tan on his own phone.

This is actually the biggest element of satire of SuperEpic: all of these mobile games are shoddy, cheap-looking clones of past successes including Candy Crush, Puzzle Bobble, Flappy Bird, Canabalt and so on, very colorful, full of obnoxious graphics and pay-to-play elements (thankfully just as a joke). Play these games until you get the achievement, or until they unravel into a mess of bad code, and you’ll get a number that can be inputted on a keypad (in SuperEpic’s levels) to get to those previously inaccessible areas. The most interesting of these is a clicker-style idle game that doubles as a bitcoin… sorry, “Pigcoin” miner. Making it run long enough in your browser, and unlocking all the ATM in the various areas of the map, will give you huge amounts of Pigcoin, which in turn can be converted into various prepaid cards that can be used to buy stuff in the shops.

The boss fights are perhaps the least original part of the game: almost all of them are set in large arenas where the pigs move about, unleash attacks and summon mobs of enemies after a while. The most interesting exception is the fight against the Game Design Thief that, true to his job description, traps our heroes in a faux-retro platformer (complete with CRT effects) which is in fact a rip-off of the actual retro-style Spanish game A Hole New World. As it often happens in the world of indie developers, this production is full of nods to other Spanish indie titles, such as the prisoners in the catacombs being animal versions of the main characters of said games; not to mention the nonsensical title itself, SuperEpic, which could be a nod to Spain’s most popular metroidvania, the above-mentioned UnEpic. Ola the llama also comes from Undercoders’ earlier game Superola and the Lost Burgers, a terrible pixelated “wacky” endless runner full of memes and references which could pass for one of RegnantCorp’s cheaply-made releases, so that the whole game could also be an attempt by Undercoders to redeem themselves. 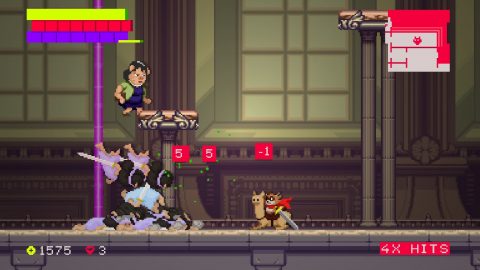 There is in fact a lot of additional content if compared to their early simple one-note game, including NPC giving us some sub-quests, the opportunity to destroy all the security cameras scattered in the world map, and even a whole secondary rogue-lite mode adventure unlocked when you pick up a certain item. However, the more Tan Tan continues his quest to defeat the CEO of RegnantCorp, the more SuperEpic turns into an example of “quantity over quality”. There are dozens of different weapons, but they all mostly behave the same way; most special moves are kind of useless and not worth the hassle to find the hidden gems; the beat-‘em-up-style combat system itself doesn’t mesh too well with the platforming aspect of the exploration, since enemies either come in mobs or in single mooks that turn totally invincible while parrying, so it’s just a matter of hitting them as quick and hard as possible, without a real need for flashy combos or moves. Maps are huge, but quite simple and repetitive with all the big halls, long corridors and deep shafts, to the point that you’ll buy more stamina enhancements just to zoom through them as fast as possible.

As for the mobile games mentioned above : knowing that not everybody can (or wants to) use their smartphone to play them, Undercoders did not made them mandatory to finish the game. However, there should be at least an incentive to try and play those mini-games, since they’re more or less the whole point of the plot: instead, completing them gives such negligible in-game rewards that after a while you won’t bother anymore, especially after hoarding enough Pigcoin to buy the most expensive, and thus powerful, equipment.

Then again, it’s all still part of the satirical concept of the game: without spoiling too much, Tan Tan’s reliance on his cellphone, on RegnantCorp’s NPC employees and on certain greedy characters will ruin his quest in the end. The game’s bad endings, while fairly predictable, still hammer Undercoders’ point that putting profit above everything else is bad. And that a CEO and a dark lord final boss aren’t the same thing, even in the context of a fantasy video game. In the end, while not perfect or amazing, Undercoders’ game is still fun and a huge improvement on their previous titles, with references put not just for the sake of it but actually integrated in the plot, and with several interesting ideas that could be perfected in an eventual sequel, since the endless onslaught of sequels and remakes is another element of the gaming industry that is rife for parody and satire.