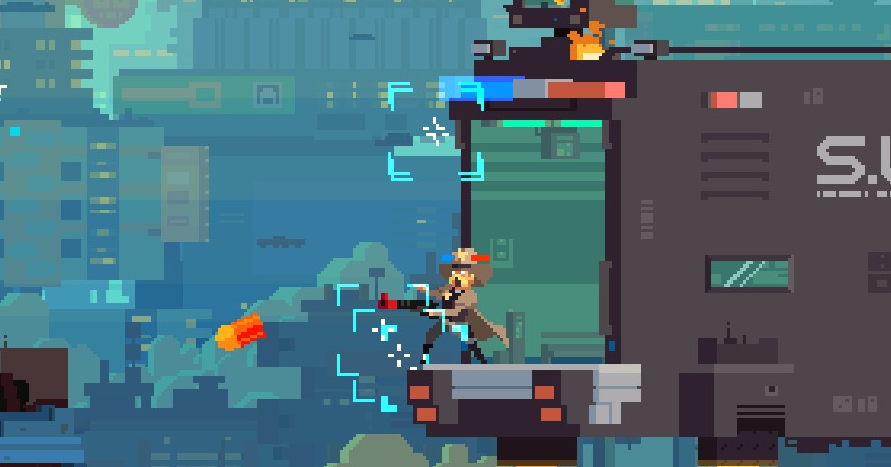 Time travel is an interesting theme underlying several games, such as skipping seven years forward in Ocarina of Time or hopping through various eras in Chrono Trigger. Some games took time manipulation a step further and ingrain it into their fundamental gameplay mechanics, like Blinx: The Time Sweeper and Prince of Persia: The Sands of Time. It seemed like time control was losing popularity for several years, but more recent titles, like Braid and The Misadventures of P.B. Winterbottom, have brought it back in style. And yet, it still doesn’t feel like quite enough games have featured this fascinating gimmick, not counting emulators that allow players to rewind time if they feel their performance sucks. Capybara Games, makers of Critter Crunch and Superbrothers: Sword & Sorcery EP, had the idea to take time travel and fuse it with run-and-gun gameplay akin to Contra or Metal Slug. Mix that idea in with several tablespoons of Adventure Time-esque madcap insanity, and the end product is Super Time Force, a game that doesn’t just play with time, but takes it on every single ride at the amusement park. 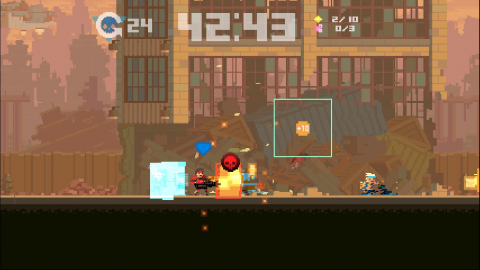 The premise sees Dr. Repeatski figure out the secret to time travel in 198X, but the instant he comes to this revelation, his future self warps in to pay him a visit. Now known as Commander Repeatski, he gloats to his past self about how so much more awesome he is before returning to his spaceship. As the leader of the Super Time Force, Repeatski is devoted to sending his inter-temporal commandos to various epochs of history for the sake of awesome and rad missions. This includes saving the dinosaurs, preventing Atlantis from sinking, finding and pawning the Holy Grail to keep a restaurant chain afloat, and other such crazy ventures. However, the Super Time Force is threatened by Dr. Infinity, a mysterious mad scientist who has also managed to figure out time travel in addition to building an army of robotic soldiers called “Blounbots.” It’s an incredibly loose and silly plot that only serves to be funny, which it is if you don’t mind a bit of juvenile humor. While it’s nothing on part with Borderlands, you do fight a feces monster at some point, so beware. 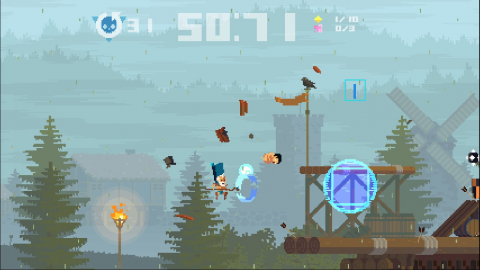 Even if Super Time Force‘s sense of humor doesn’t align with yours, the silliness takes a backseat to the mechanics, which thrive on having lots of playable characters fitting under an impressive time control system. You start out with three soldiers in employ: Jean Rambois, Aimy McKillen, and the unsubtly-named Shieldy Blockerson. Jean is the standard commando whose machinegun works when you need a straight assault, Aimy is a sniper who’s able to pull off trick shots and shoot through walls, and Shieldy repels enemy attacks and projectiles in addition to flaunting a mean shield bash. Very early in the game, you get to recruit Repeatski’s college roommate, Jef Leppard, whose bazooka qualifies him as the heavy weapons expert. More doomed warriors will join your ranks if you find and save them, including a walking dolphin named Dolphin Lundgren, a somehow familiar shotgun-armed woman named Melanie Gibson, the Jedi couch potato Lou Don Jim, the skimpily-clad wizard Merlin, and Zackasaurus, a totally rad dinosaur in shades and a Hawaiian shirt riding a skateboard. Everyone has standard and charged attacks that are useful in different circumstances, and you get to experiment with who works best as you muck with the flow of time itself. 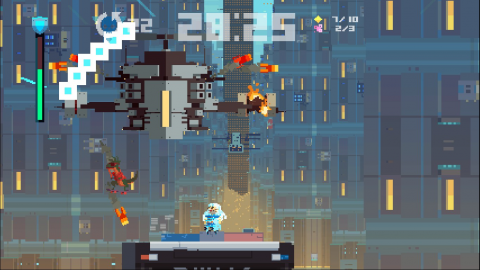 You get thirty lives in each level, and every time a character dies or you activate the rewind, a life is spent for “Time Out” mode, where you get to rewind and fast-forward around all the progress you have made so far. You then get to choose exactly at what point in time you want to respawn and can pick a different character if you wish. When time starts up again, your current character fights alongside a “time clone” of the previous character from your previous life, and if you keep rewinding, more time clones remain from other timelines and add a lot of potential firepower if you can direct them properly. If you even manage to save one of the clones that died last time by blocking or destroying what killed them, you can absorb their power. You normally only take one hit before dying, but absorption allows you to take a bonus hit, and your charged attack simultaneously fires their charge attack as well for a very powerful burst. Proper rewinding and building your own army of other selves helps destroy enemies and obstacles much quicker, and it looks really darn cool to boot. 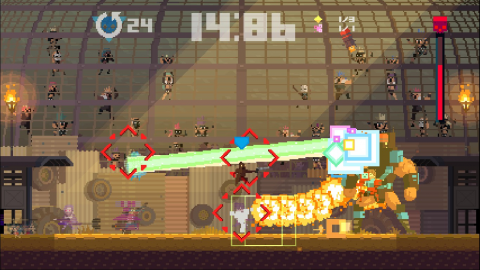 It may be a bit too easy to get to the end of each stage with a whopping thirty lives, but Super Time Force offers further challenges to ensure you master the time mechanic to accomplish. Each level encourages you to find all the Glorbs, yellow diamonds that add a life when grabbed. Some of them are floating in often off-the-path areas, and others fly out of destroyed enemies or obstacles, breaking if you don’t catch them. For most flying Glorbs, you must rewind and set your present character to catch the Glorb after the past character makes it appear. Each level also has temporal anomalies called “Shards” that slow time down when hit, but they only appear when you rewind after reaching a point. Every level also contains an ethereal being, the Looker, which can only be found by reaching it in a very short amount of time. Collecting all three of these bonuses gets you even more characters to unlock. 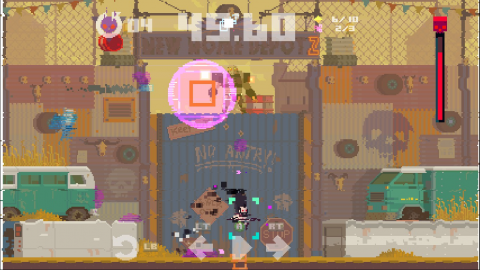 The action in Super Time Force is insane and death seems almost unpreventable at times, requiring that you Time Out often and figure out how best to arrange your other selves. It almost feels like as much of a puzzle game as an action one, which would be in line with Capybara’s prior work in Critter Crunch. If you think it’s a bit too light in the challenge level, then the “Super Hardcore” mode is available after beating the game once. This causes any character to be permanently disabled when killed, so you have to play cautiously to avoid running out of crew stock. It’s still not the most difficult game out there, so you may want to look elsewhere for a knife-edge challenge. But if you’re looking for a great retro-styled trans-temporal explosionfest, you’ve come to the right place. Super Time Force‘s use of pixel art feels authentic and detailed instead of just using simple graphics to cut costs, depicting colorful locales like dinosaur-laden prehistoric times, a Mad Max-inspired rendition of the present, and a tourist trap version of Atlantis. The retro vibe is further enhanced by the chiptune score of Jason “6955” DeGroot, who infuses the action with upbeat tunes and opts for a particularly dreamlike cadence whenever Time Out is in effect. 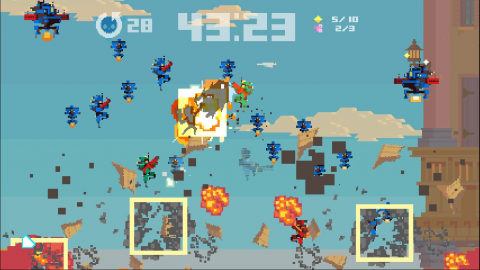 Super Time Force is as crazy as it is clever. It’s never a dull moment, especially once you get to one of the many different boss battles. Dr. Infinity attacks you in a bunch of various gigantic contraptions and situations, like a teleporting knight mecha, a spider-bot that electrocutes a titan (it makes sense in context) and even an insane fight within the Internet that holds shades of a multi-part boss battle from Contra: Hard Corps. Whether it’s the bosses, the playable characters, or the glorious feeling of collecting everything in a level and hearing Zackasaurus shout out his designated catchphrase “Kookabunga,” there’s bound to be something you’ll love. 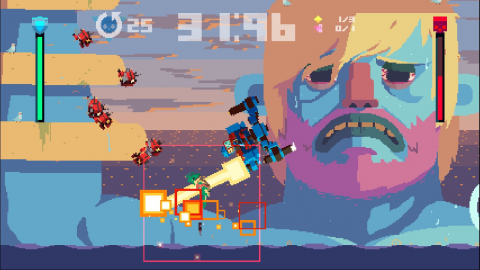 When re-released onto Steam, it became Super Time Force Ultra and added several more goodies. Three guest characters from Valve become unlockable by collecting glorbs: Zoey from Left 4 Dead, Saxton Hale from Team Fortress 2 lore (and from unofficial “boss” mods), and the Pyro, also from Team Fortress 2. They’re all quite powerful and fun to play, especially the Pyro, whose charged flamethrower obliterates just about every boss. The PS4 and PSVita versions also include Sony President Shuhei Yoshida as a playable character, who bombards enemies with deadly emoticons and text messages. It also enables the “Ultra Mode,” where you get to summon superpowered dark versions of each character. They can do massive damage, but you can only summon five per level and they only last for ten seconds before exploding, so use wisely. The last notable addition is the “Helladeck,” a set of fifty challenge levels where you need to collect all Glorbs using a limited selection of characters and lives. The Helladeck’s chambers are trickier than the main game’s levels and require some forward thinking and precise timing to conquer. And finally, the Ultra officially makes the title’s acronym into “STFU.” Kookabunga, bros!