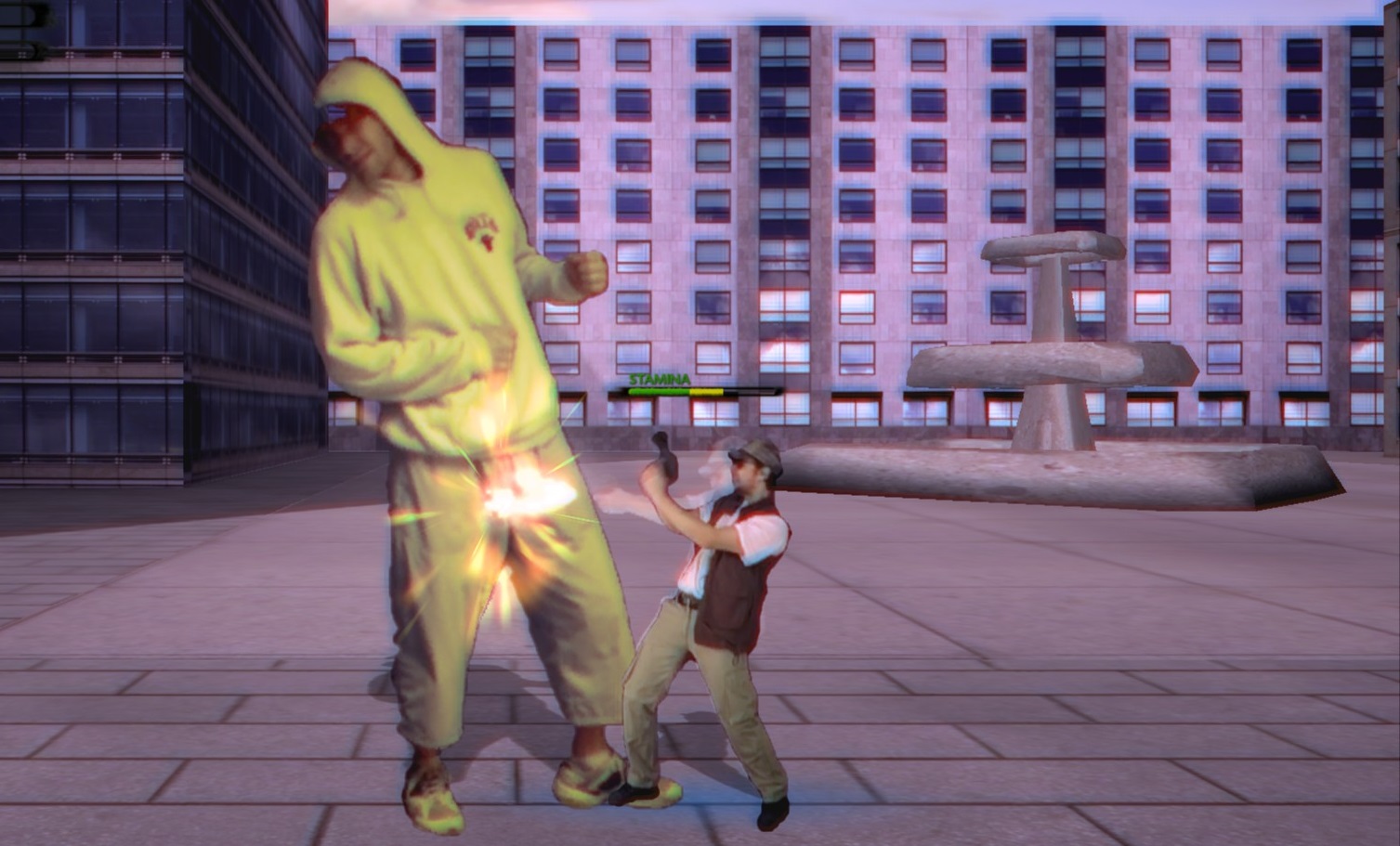 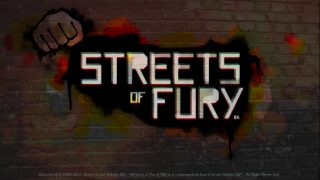 To properly explain the surprising level of quality in Streets of Fury EX, it becomes necessary to describe a few factual statements about the game. The game itself is a highly enhanced remake of a game previously seen on XBOX Live Indie Games, a service that typically featured small, shareware-esque games, often made by a singular person. The characters on screen are digitized actors with varying levels of martial arts training, many of whom are likely friends and family of the developers. The divisive internet personality The Nostalgia Critic is an unlockable playable character. All these factors should result in a game that should be awful, and yet by some total cosmic fluke, it all results in a surprisingly solid, even deep brawler.

An alliance of gangs are rioting across the streets of Paris, and no one is safe. Against their combined might, even the French military has gone on strike. In the only logic that could appear in a beat-em-up, the government decides to hire a street gang from Los Angeles to take back the city. The plot itself is only really presented during a text scroll at the start of the game. It’s simplistic, but it’s more context than was truly needed, and doesn’t get in the way of the game itself. 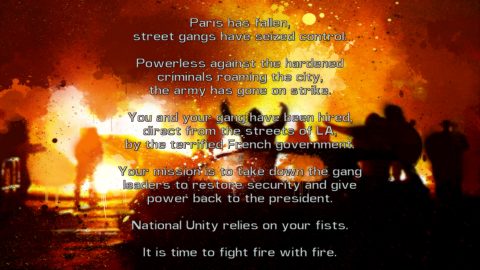 Refreshingly, the game borrows little from the typical template established by games like Final Fight. Instead, its button configuration and many of its mechanics feel similar to Saturn classic Guardian Heroes. Much like in that game, the field is split into three distinct lanes that have to be traversed by hopping between them. While you don’t have a special character you can command, you’ll often find AI teammates joining the battles ahead with you, helping you fight off your foes and typically making the screen erupt into total chaos. The game features plenty of its own mechanics however, sometimes at the cost of more complex systems like GH’s RPG elements.

There’s a staggering 22 different characters to select from, although a majority of these have to be unlocked by playing the game for long enough. There’s a pretty wide variety of characters to choose from, starting off with serious karate master Mitch Cassidy and Jean-Louis Marceau, who has a fighting style that can be only be described as ‘vaudevillian’. The rest of the characters you can unlock are just as varied, including a guy who’s main feature is that he actually thought to bring a gun. There are also a few ‘guests’ on offer, including the previously mentioned ‘critic’ and esteemed fighting game community member Ryan Hart. It should be noted, however, that these characters won’t appear if you never select them. 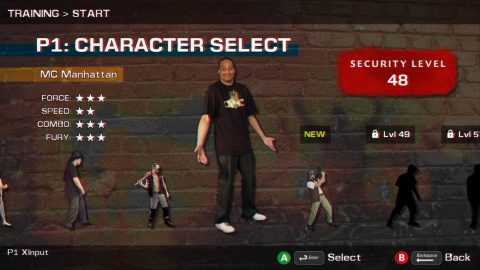 Even despite the wide roster, there’s a pretty vast moveset for each character to make use of. Weak attacks make for fast combos, while the strong attack button lets you knock away foes in various directions. Both of these buttons can be combined with different directions to perform different moves, which adds a lot of variety to the moveset without complicating the control scheme. Each character also has an assortment of special moves, from rising uppercuts to flame waves to making use of the aforementioned gun. Finally, every character gets access to a set of powerful ‘Fury’ moves, which use up one of the three stocks of meter gained by inflicting and taking damage. 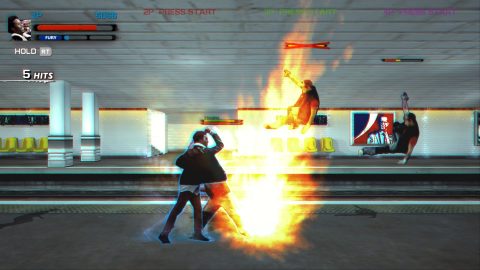 One thing you also have to keep an eye on is your stamina meter, which is used up through a number of different things. Special moves will take out a certain amount, as will backdashing. Stamina will quickly recharge when you’re not doing any of these things, but this gauge also determines how well you can block. If you’ve used up all your stamina, a single hit will break your guard, opening you up to surrounding enemies. You can also expend all your stamina at once to parry incoming attacks, a rather risky maneuver that feels incredibly satisfying to do when you can time it properly.

The game places a serious emphasis on combos, and all of these tools can be used in tandem to inflict massive strings of hits. You have moves that bounce enemies off the ground, opening them up for further hits. All characters can also launch enemies into the air, where they be followed up to perform air combos and special moves that only function while you’re airborne. Basic moves can be cancelled into special moves at any time to extend combos, and special moves can be cancelled into Fury moves to inflict maximum damage. There’s a lot of options open to a creative player, and the game even offers a link to some of the developer’s own combo videos to give you some inspiration. 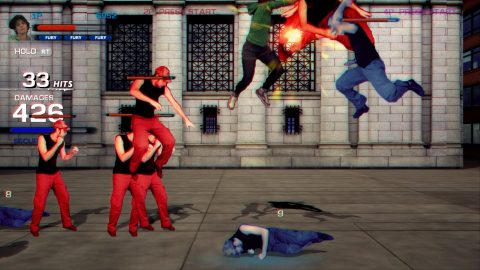 Knowing how to combo effectively is almost essential to success on the higher difficulties, as the enemy hordes come at you numerous and aggressive. It’s easy for enemies surrounding you and begin hitting you in all directions, taking out big chunks of your life. Thankfully, the game allows you to knock away incoming enemies by pressing a button, although this is only available once you’ve taken too much damage at one time. Knowing how to properly control the crowd is an essential technique to master, especially when multiple types of foes come into the mix. “Fight an army,” the game demands at one point. It’s not really being hyperbolic.

The game does a great job of keeping the enemies unique, each one having particular tactics you’ll need to use. Some attack incredibly slowly, but once they begin swinging, they’re nearly unstoppable. Guys with nunchaku, however, attack quickly, but leave themselves wide open. Even enemies of the same type have different tactics depending on their color. Green kendo swordsmen will counter your attacks without fail while they have the stamina, for example, while red ones will blow themselves up shortly after you meet them. It helps add a lot of variety, especially considering the fact that the game doesn’t have as many unique enemy sprites on offer as most sprite-based brawlers might. 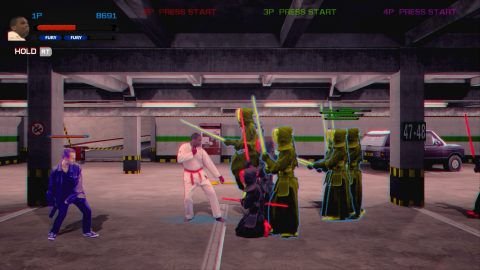 Along with the option to bring three other players into the battle, you’ll frequently have the help of AI teammates. They’re surprisingly competent in battle, and will often help you take out foes you’re not currently scrapping with. A lot of the most fun points in the game are when two sides are battling it out, attacks from friends and enemies alike flying in all out street warfare. With friends, the action only gets crazier, as the more players you have, the more opportunities for ridiculous combos appear.

There’s an assortment of difficulty levels, including the ability to create your own, and on higher difficulties, the game does get rather tough. You’re only given five lives to clear the entire campaign with, and if you don’t know what you’re doing, you’ll lose them quickly. The game can punish mistakes harshly, but it always feels more like your fault for not getting better. Thankfully, the game never locks out content on the easiest levels, allowing anybody to get in and enjoys themselves regardless of skill. There’s also a large amount of content to play through, including two entire campaigns, various challenges to clear, a survival mode, and a versus mode for up to four players at once. 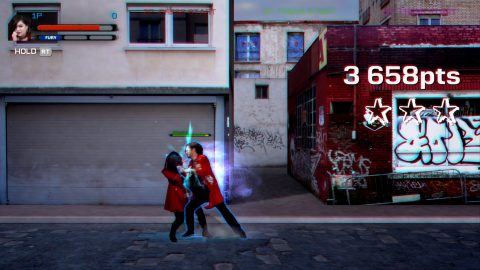 Beyond trying to master the game, most people will have a good time enjoying the sheer goofiness of the game. There’s a lot of points in the game that are inexplicably hilarious, and it’s difficult to tell if it’s intentional. Enemy sprites often appear in giant size for no clear reason, and one enemy type constantly demands to know if you’ve had relations with his wife. And then there’s the recurring miniboss who falls into the scene from nowhere, smiles and points his fingers at the camera, and then proceeds to dropkick whoever’s in front of him. You can actually unlock and play as this cheery gentleman yourself, and you’re free to pose whenever you so please.

Meet MC Manhattan. He has a thing for dropkicks.

The digitized sprites are as cheesy as expected, but they animate with surprising smoothness. Unlike other games of the style, these animations are frequently interrupted to facilitate the gameplay, which means that they never hold the fighting back. The backgrounds are rather basic, with little to no detail in the way of detail or any particular surprises. The voice work is almost entirely in French, and due to the volume mixing, it’s difficult to understand what anyone, even the English speakers are saying. The music is mostly made up of things like trance and hip hop, and it’s all entirely forgettable.

It would be easy to blow the game off as quick shovelware, the sort of game made to fill out sales of game bundles. It certainly does its best to look the part, but there’s a shockingly solid brawler beneath the cheese. For the price it’s typically on offer for, it’s absolutely worth seeking out and enjoying, both for its solid gameplay and its goofy presentation. With the team now helming the upcoming Streets of Rage 4, the higher budget they’re surely working with can only lead to great things.