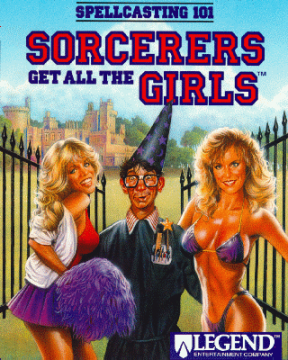 So there’s this series of games. The protagonist lives a normal life, but he’s treated badly by his stepfolks and never quite fits in with his surroundings. His life takes a dramatic change, though, when he enters that magic school and becomes a wizard in training. Oh, and each episode represents a school year at the occult institution.

OK, no more obvious Harry Potter references, but with the many similarities between the two franchises and all the lawsuits around Rowling’s series, one has to wonder why there’s never been a juristic showdown with Legend Entertainment. There are even more links than those mentioned above, and when playing through the first game only, it becomes consecutively harder to believe J. K. Rowling never touched the series before conceiving Harry Potter. But then again… 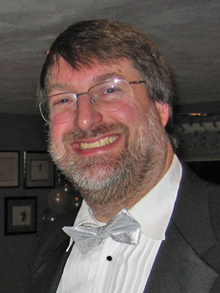 Steve Meretzky, creator of the Spellcasting series and many other funny games

Once upon a time, there was a nerdy, naughty Wizard…

While Harry Potter, however, is a series of deep, serious novels about the development of several strong young characters, Spellcasting 101 presents itself as a variant on the humorous tale of the juvenile, nerdy outcast/loser trying to earn recognition and lose his virginity. In fact, like much interactive fiction, there’s very little to the protagonist Ernie Eaglebeak at all, he’s really just “you, the player” for all intents and purposes other than his silly face on the title screens.

In the same vein, the game never puts the focus on an great overarching plot, but rather revolves around several setpieces and funny scenes, putting the puzzles and the laughs on its highest priority. That isn’t to say the games lack story development. From the first game on, small hooks and allusions to further events and sequels are weaved into the scenes, which link the series into a cohesive whole, almost episodic in nature.

Yet it’s the jokes that definitely steal the show. As is to be expected from a work of interactive fiction by Steve Meretzky, the writing is genuinely funny almost at all times, if intentionally juvenile. From hilarious description of seemingly boring backgrounds to the genre-typical narrator who constantly breaks the fourth wall to tease or ridicule the player, the game, everyone and everything, the man definitely knows his job. You know you’re playing an adventure game with great writing when failure brings almost more joy than succeeding. The parser is strong enough to keep frustration from invalid commands to a minimum, and even when it can’t process the input, it’s usually easy to discern what’s wrong. Most of all, it’s pure fun to try out all your spells on the most nonsensical targets.

Despite the somewhat raunchy subtitles and cover art, the Spellcasting games are entirely tame – until you activate the “naughty” setting. Female characters that put Ernie through chores or played board games with him are now eager to copulate with him, and there are a lot of female characters in the game. A game of this theme quickly calls for comparison with the Leisure Suit Larry series, but other than the short, polyester loving loser, sorcerers do indeed get all the girls. Well, except the one. Yet the visuals never get any racier than to show a woman in lingerie or putting her bare behind on display. The text, however, can get surprisingly explicit at times. One would think setting the game to nice mode would deprive one of most of the fun, but actually, the “censored” text reeks so much of fake moralizing and pretentiousness that it’s gonna have you lying on the floor with laughter when reading with the knowledge of what is really going on. The questionable imagery usually either won’t show at all or are replaced with alternative, less revealing versions. It seems, though, that Legend Entertainment wasn’t quite sure what they considered adult content, and some graphics showing almost-nudity remain intact in both modes. 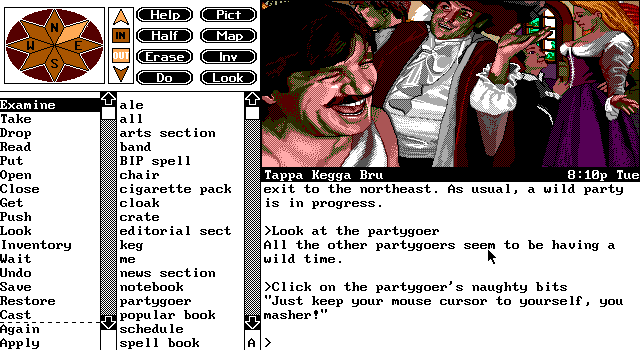 The tool to find your way through all of Ernie’s exploits is Legend Entertainment’s well-proven interactive fiction interface. Actually, it wasn’t well-proven at all at the time when Spellcasting 101 was released, as it was the very first game to introduce the system. Above the typical text adventure text window and parser input rests by default a visual representation of the current scene. To the left are listed a lot of – but not all – verbs known by the parser as well as all things and persons Ernie can currently interact with. Finally there’s the compass that provides for a clicking alternative to the directional commands.

The plain artworks don’t seem look much, and many interactive fiction veterans would likely rather have more space for text than all this bells and whistles, which is possible, as the interface is customizable. Still, they’re more than mere decoration and full of hotspots, so the games can be played almost like point & click adventures by the less old-school players, although with an awful lot of verbs to browse through. There are even a few extra responses especially reserved for mouse clicks and objects you wouldn’t know they’re there by the textual description alone. Still, seeing the picture is never a requirement to solve a problem. The image can also be swapped for a map of the current area, a list of your inventory or the text description for the current scene.

Oh, and there’s also the clock, which you should always take care of. While the game doesn’t run in real time, every action costs a certain amount of time, and many of the events in the game are momentary.

That’s right, there’s a dozen ways to miss your chance, screw up, die, maneuver yourself into a dead end. Fortunately, the game offers an undo function to revise an unwise command. Once. Saving often is imperative, as is keeping several backup states. Despite the inventive and modern presentation, below the surface the Spellcasting series proved dauntingly oldschool even for the time of its release, and the games are prime examples of obfuscated design. A player not ready to take notes, read every line of descriptions carefully, think around three corners and then do it all again after failing, is in danger to give up on the series swiftly. Spellcasting is also one of those games better enjoyed together with a friend, as two (or three, or …) brains are not twisted as easily as one. The logic is often crazy, but finally getting it is one of the most rewarding experiences in video gaming ever.

The game is full of more stuff they don’t make like they used to, anymore. Seeing how Legend Entertainment was the quasi-successor to Infocom, it only seems natural that the games come with a number of feelies that double-serve as copy protection. Printed maps, charts and other documents put immersion to new heights in 1990, but hold the potential to frustrate the modern retro gamer to no end in trying to get hold of them. There’s also a sense of realism to some mechanics that even adventurers spoiled by the LucasArts-comfort zone might view as needlessly bothersome, like Ernie dropping all his stuff each time he falls asleep.

Besides requiring to go to the right spot at the right time, most puzzles are solved with the help of magical spells. While there are a few inventory puzzles, most are very simple and about as obvious as “unlock door with key”. The tricky part is interpreting and applying the descriptions in your spell book to get the required items in the first place. Take for example the SKONN spell in the first game, whose purpose it is to “increase bust size”. No, you can’t help any female characters to a new cup size with it, but yes, you’ll encounter a situation where you have to put it to good use. There are generally two methods to learn new spells: Most are confined in spell boxes received by triggering certain events and just have to be opened to be transferred into the spell book. Yet there are a few spells that can only be gained by hard training in the spellcasting simulator, kind of a magic holodeck that puts the Sorcerer’s University students in typical situations a sorcerer’s apprentice is faced with in his daily life.

The Hero of the game. Escaping his hellish life, he enlists at Sorcerer University. But well, as it usually goes at college, he ends up being more occupied with doing other things than studying.

Ernie’s big, secret love. As usual for love interests of nerdy loser protagonists in comedy like this, she’s the most uncaring and shallow bitch you could imaginable.

Ernie’s evil stepfather, who keeps him locked up tight for fear of an ancient prophecy. He also apparently has unfinished business with Sorcerer’s University.

Professor of spellcasting. The old geezer has a heart of gold, but a memory made of fish nets. He constantly forgets what he is currently talking about even in the most dire moments. If he doesn’t just doze off, that is.

Otto’s wife is scandalously young and even more scandalously unfaithful. Hardly getting the satisfaction she needs in her marriage, she is apparently determined to do it with anyone that stumbles into her room. And stumbling into places is something Ernie Eaglebeak does exceptionally well. 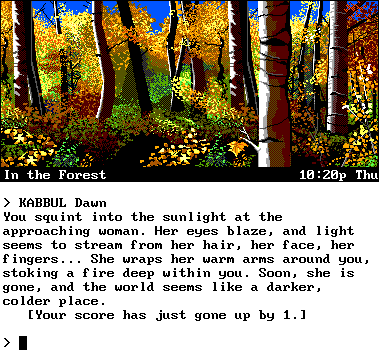 Ernie Eaglebeak lives miserably under the fists of his stepfather, who keeps him locked up in the attic and beats him up good regularly. Only two things help Ernie see the light: His secret love to his neighbor Lola Tigerbelly (yes, all the characters have silly surnames), and his admission to Sorcerer University. So when the opportunity arises, he breaks out of his prison and makes a run for the institute. After registering at the lobby with his registration form (keep your feelies ready), school can begin. With the form comes a schedule of Ernie’s classes for this term, but skipping most of them usually won’t hurt. Some hold valuable information, though. Ernie barely gets to know his new home before the school is attacked and the mighty Sorcerer’s Appliance – which holds the ultimate magic but whose actual purpose is impossible to discern – gets stolen. Ernie is the only one left, and so he jumps on a magic surfboard to find the appliance and its great attachments on various small islands.

This setup allows for a modular plot progression, as each island is played as a chapter in itself. Very thankfully, as this means the mess one makes is usually confined to one single island, which makes it easy to recognize when messing up (usually when one misses the new important spell or item at the end). It also allows for a distinctive setting in each chapter, and all of them are hilarious. What other game makes you re-enact Goldilocks and the Three Bears – backwards!? Some parts can be tiring, as the Island of Lost Soles, where Ernie has to solve 80(!) riddles based on puns do find out the names of the lost souls he has to recover. Fortunately, it is possible to get hints by helper nymphs after a while.

In the end, Ernie finds out the truth about his stepfather and his pedigree, saves the day and gets instantly promoted to Sophomore. But he doesn’t get the girl, even after saving her life. Well, at least he got all the other girls he met.