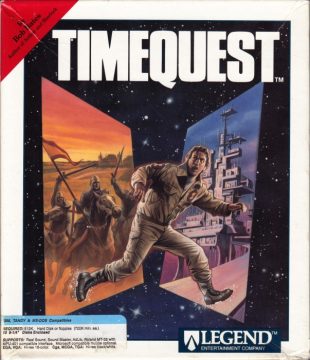 Timequest, Legend Entertainment’s second release, is very reminiscent of Sierra’s text adventure Time Zone. Spanning six disks and retailing at nearly $100, this massive (for 1982) game sent you traveling around the world through eight different time periods, meeting with many famous historical figures. While extraordinarily ambitious, it also suffered from the same sparse writing, arcane puzzles and awful design that plagued all of Sierra’s other early products. It was still an amazing concept, although it took nearly ten years for it to be properly fleshed out under the care of a different developer. (Despite the similarities, the games are not related.) 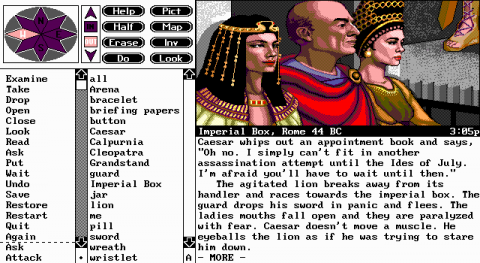 The story is, you’re part of the Temporal Corps, an elite unit with the ability to travel through time with a device called an Interkron. One day, a fellow officer named Vettenmeyer totally snaps and decides to totally screw with history, altering ten events that changed the course of the human species. Your job is to fix the mess he made, uncover the clues that point to his secret hideout, and take him down. None of these scenarios are actually related in the game itself, as instead they’re all described in a mission briefing guide included in the game’s packaging. The way they’re presented, it seems like you could conquer them in any order, but the items required to beat a certain scenario are usually found after completing another. You’re given the starting points of each problem, but it’s difficult to get a grasp on what you’re supposed to be doing until you discover what items you can find and piece together where they can be used. Your Interkron can travel through both time and space, sending you to six different locations around the globe in nine different time periods, not counting your own. Of course, not every era is relevant to your quest and therefore is not visitable, but there’s still a lot
of ground to cover. 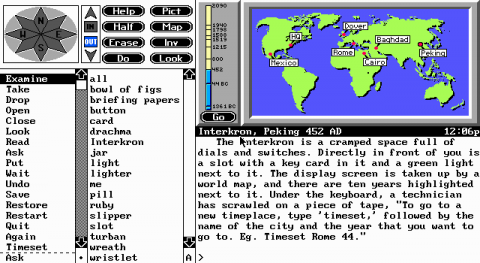 In the various time periods, inhabitants rarely question your presence and you can easily sneak into many places without much of a hassle. While bizarre, it allows you to concentrate on the larger goals of each quest, rather than worrying about constantly maneuvering around guards. They also all speak modern English, although that’s written off due to the futuristic translation technology. 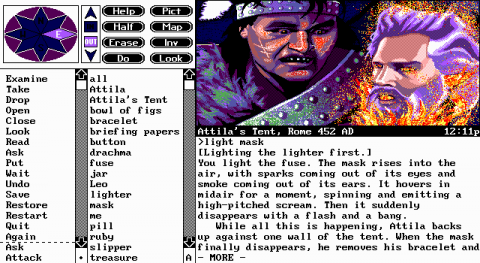 In each scenario, there’s also strict time limit to get everything done. If you miss the timing, the game ends the next time you try go to a different period. It’s strange, then, for a game about time travel, that you can’t just travel to an earlier point, reset the events, and try again. This is because the clock essentially “stops” whenever you leave a time period, and resumes at that same exact spot when you return. It was probably to keep things from getting too complicated, or potentially from causing time paradoxes from running into yourself, but since there are dozens of ways you can get stuck in unwinnable spots, it would’ve been cool to manipulate time to correct mistakes like this. 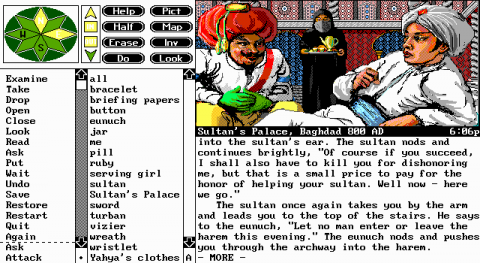 Once you’ve rationalized how it all works, you can begin correcting the timestream. The
first – and most straightforward – case involves Julius Caesar, who was famously killed by conspirators in a power struggle. Vettenmeyer has scheduled an “accident” to occur months before his intended death, disallowing his assassins to argue over his succession and thereby avoiding the downfall of the Roman Empire. Another involves the slaughtering of the Aztecs by the Spanish conquistador Hernando Cortez. The Aztecs believed that Cortez was the human form of the god Quetzalcoatl, who had promised vengeance upon them, and therefore led to the downfall of their civilization. Their myth has since been changed so the Aztecs believe they are invincible, thereby fighting against Cortez rather than submitting to him. 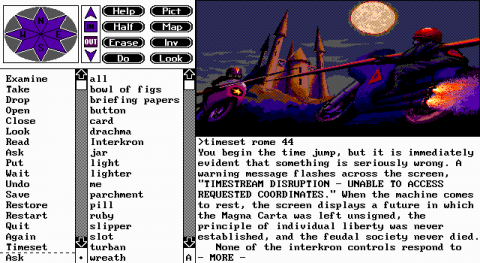 The most contemporary scenario involves the Battle of Dunkirk, one of the turning points of World War II. Although the Axis was in a position to defeat the Allies, Hitler stopped his advances for three days, for reasons which are widely debated. This waiting period allowed the Allies to successfully evacuate their troops. Through the antics of your time-travelling nemesis, now Hitler is scheduled to continue his assault, thereby winning the battle and therefore the war. You need to convince Hitler that the Allies have surrendered, so he will not resume his attack. England has no wishes to give in, and you cannot persuade them otherwise. During this time, Churchill is giving a speech regarding the situation. The secret keyword indicating the British surrender is “cigar”, so you need to trick Winston Churchill into saying it on air. Once you do so, he obviously realizes his mistake and recants it almost immediately. At this point, you need
to travel to Rome, where the Axis leaders are listening to the speech, until the point where Churchill says the keyword, and then unplug the radio so they can’t hear his correction, thereby completing the ruse. 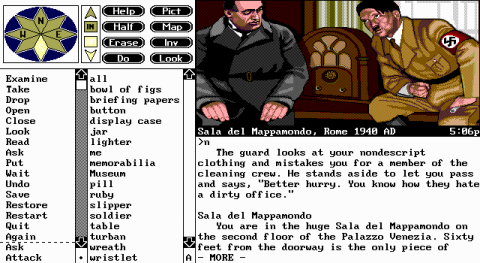 Sometimes the cases intertwine, as they do with Napoleon. During his quest for European domination, he decided against directly attacking England, fearing they would be too strong, instead heading towards Egypt to cut off their trade routes. Vettenmeyer has told him otherwise, and since it’s believed that his assault on the British Isles would have succeeded, you need to put Napoleon back on course. But then there’s the case of Charlemagne, the man who believed himself to be on a holy mission from God, who would then proceed to unite most of Europe. But Vettenmeyer has planted the seeds of doubt into the would-be king, causing him to deny the crown and thus potentially leave Europe in the Dark Ages. So, in an extremely elaborate series of events, you need to steal the crown, and give it the young King Tut, who keeps it buried in his pyramid for thousands of years. However, you cannot retrieve the crown yourself, because it is hidden in such a small passage. But what you can do is convince Napoleon to follow you into the pyramids (after you’ve gotten him to invade Egypt), whose tiny stature allows him to squeeze through and get it himself. Since Napoleon believed himself to be the rightful successor to Charlemagne, he has this engraved on the crown when he coronates himself. Then, you need to jump forward to 1940, where the crown is held in Mussolini’s museum, steal it, then return it to Charlemagne, who will now be assured of his holiness after reading the engraving. 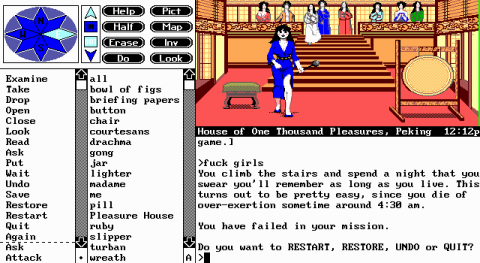 The final puzzle allows you to fool with time traveling little bit more. When facing off
against Vettenmeyer, there are two teleportation pads, both of which will send you a short time into the past. When you first arrive, your future self will give you an important piece of information, which you need to use and then relate again to your past self in order to complete a full logical time loop. It’s a bit mind boggling, but it all makes sense if you’ve gotten this far without your brain exploding. 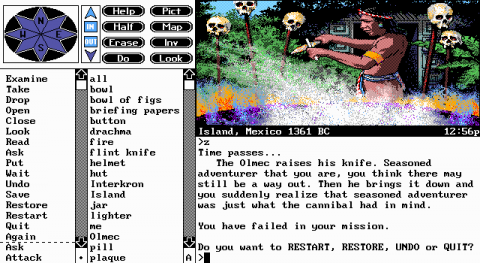 The convoluted scenarios are the crux of the game, but it’s got plenty of other things going for it too. The writing is dry and straightforward, but there’s plenty of understated humor. In contrast to the lady loving of Spellcasting 101, any potentially romantic entanglements go awry. Cleopatra invites you for a special session, but deems you unworthy for a full night of passion, and attempting to copulate with the twenty prostitutes you can purchase in China will result in a heart attack. (You’re supposed to use them to distract the guards.) Try to kill Caesar and he’ll simply say that he can’t fit another assassination attempt into his schedule. Try to kill Cleopatra, who was his mistress, and Caesar’s wife Calpurnia cheers you on. Despite the historical density
of the plot, it’s not above fooling around, which of course allows you to do absurd things like convince Attila the Hun of the Christian God’s power through a fireworks display or establish yourself as the founder of a Buddhism. 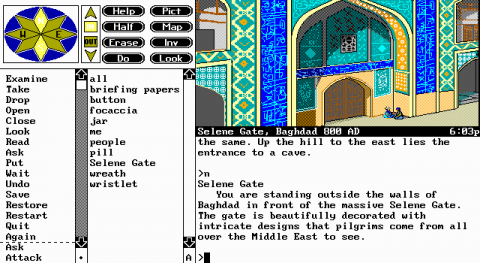 There is a certain point where it’s hard to believe anyone could figure these puzzles out on their own. If Timequest was made back in the Infocom days, they probably would’ve had to designate it above their already extraordinarily difficult “Advanced” class, and without a walkthrough, it will remain inaccessible to all but the most expert text adventure players. But the puzzles are so damned creative and ridiculous that it ends up working in the game’s favor. Sure, some of your actions are cruel – one of the scenarios involves opening the doors to the city of Peking, thereby allowing Genghis Khan to invade, and causing the massacre of thousands – but you’re just setting history right. As such, it’s a dream come true for history buffs that love to see the ways the world can be manipulated, along with some of the delightfully silly things you can
do. 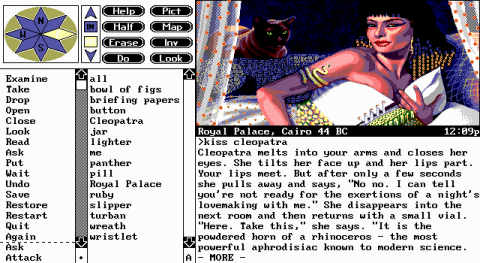