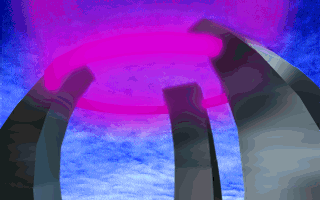 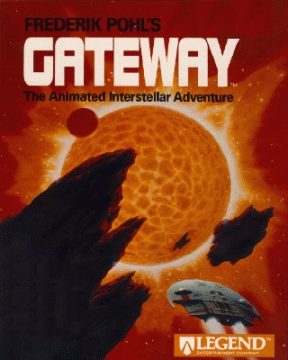 Gateway is rather distinguished in Legend Entertainment’s adventure game lineup. It’s the first game Legend released that was based on a pre-existing series of books, preceding Death Gate, Xanth, Shannara, and Callahan’s Crosstime Saloon. Unlike those other later games, it uses Legend’s older game engine, also seen in the Spellcasting series and Eric the Unready, and it’s also unique in that it merited a sequel. Finally, along with Callahan’s Crosstime Saloon, it diverges from the rest by taking place in a science fiction setting rather than fantasy.

In fact, Frederik Pohl’s Gateway is itself a fairly distinguished novel as science fiction goes, winning the Hugo, Nebula, and John W. Campbell awards upon its first release in 1977 and spawning several sequels. The first book and much of the subsequent novels are largely focused on Robinette Broadhead, to whom Pohl introduces us as he undergoes extensive psychotherapy at the “hands” of an AI named Sigfrid. You might imagine that Mr. Broadhead underwent some fairly intense trials to have ended up in this situation, and you would discover this to be correct as you read the first book.

It may thus come as a disappointment that Robinette does not feature at all in Legend’s game, which pretty much throws out everything but the setting of Robinette’s experiences: the titular Gateway space station. Discovered in 2077, Gateway orbits between Mercury and Venus and is the product of an alien race that humanity refers to as the Heechee, which vanished from the galaxy long ago. Gateway happens to be well-stocked with faster-than-light ships, and while they are easy enough to operate, their guidance systems are utterly incomprehensible – a pilot who enters a course code could end up at a habitable planet somewhere, but could just as easily meet an untimely end in a black hole. Nonetheless, those with the financial resources to travel to Gateway are enticed by the possibility that some random course code could bring them to a planet bearing useful Heechee technology or to some other discovery potentially worth millions of dollars, and there is thus no shortage of so-called “prospectors” arriving on Gateway to try their luck – including the character you play in the game, a lottery winner fresh from the increasingly resource-starved Earth. 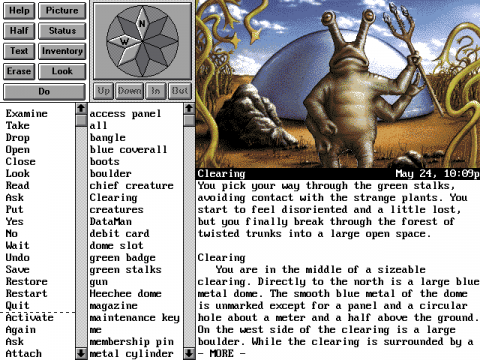 The game is rather sharply divided into three parts. You’ll need to prove yourself to the authorities on Gateway by flying out on a few missions, culminating with the discovery that the Assassins, a deadly race responsible for the Heechee’s panicked departure from the galaxy, are monitoring the rise in FTL activity resulting from humanity’s use of Gateway. You’ll thus find yourself saddled with the weighty task of activating four shield generators, each on a different planet, that will serve to incapacitate the Assassins’ galactic listening post, before undertaking a final mission to disable the outpost entirely.

The game starts off with a rather astonishing quantity of flavor text. There’s a communications terminal that can bring up bulletin board messages and news reports that resemble the asides sprinkled throughout the Gateway novel. You can even enter a virtual reality relaxation session with Sigfrid, and play an “old Earth trivia game” stocked with fairly amusing factoids about the twenty-first century. Very little of this information is relevant to your success in the game, although the things you actually need to know stand out fairly well and could probably be intuited even if you didn’t read about them. (Oddly, the game’s authors evidently neglected to properly introduce “prayer fans”, a common kind of Heechee artifact in the books that shows up on one occasion in the game without any kind of explanation, but it’s easy enough to figure out what to do with them.) You do have to interact with a couple of characters that might seem familiar from the book, but “interact” is probably a bit too strong of a word – they show up and say their lines, and there isn’t even a dialogue tree to provide a pretense of communication.

While the book focused on the strain of life on Gateway and the prospect of risking one’s life in exchange for tremendous wealth, Legend’s Gateway seems more like your typical lighthearted space opera fare – travel to strange new worlds, find new life forms, annoy them repeatedly, and so on. It doesn’t help that some of the puzzles are hopelessly contrived affairs bordering on the insultingly easy, dealing with arrangements of shapes and colors. You’ll also spend a fair amount of time in virtual realities, providing some lively and varied challenges. Noticeably absent, especially considering Legend’s other games, is any sense of humor, though the parser does have the occasional amusing response for particularly odd commands.

The puzzles you encounter are largely straightforward if you pay attention, and you’ll rarely be banging your head trying to figure out the twisted logic of the developers. There are a few red herrings thrown in here and there (hint: do not bother trying to take the maintenance man’s pliers!), but you’ll know if you’re on the right track if a particular action triggers a notification that your “score” has increased. Making things especially convenient is the fact that you generally can’t carry items from planet to planet, limiting the number of possible actions. You can still visit the four planets in the second part of the game in any order if you start getting frustrated with one of them. Getting stuck or dying is possible, but does not generally happen unexpectedly. (In a further divergence from the book, even running out of money is fairly difficult, given that there’s almost nothing you need to buy.) 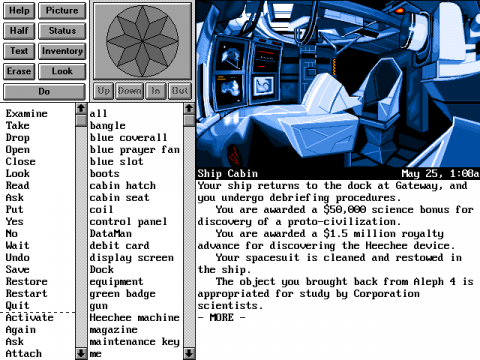 As previously noted, Gateway‘s engine is identical to that used in Eric the Unready. You’ll be typing your way through most of the game, but the friendly interface provides very convenient indicators for the objects you can interact with and exits from your current location, as well as a tiny visual window serving little purpose other than to give you something to look at. The game also features fairly terrible MIDI music, but it might grow on you after a while.

If you’re up for a rather light sci-fi text adventure that won’t tax you overmuch, Gateway is worth a spin – but don’t expect anything on the level of the novels.