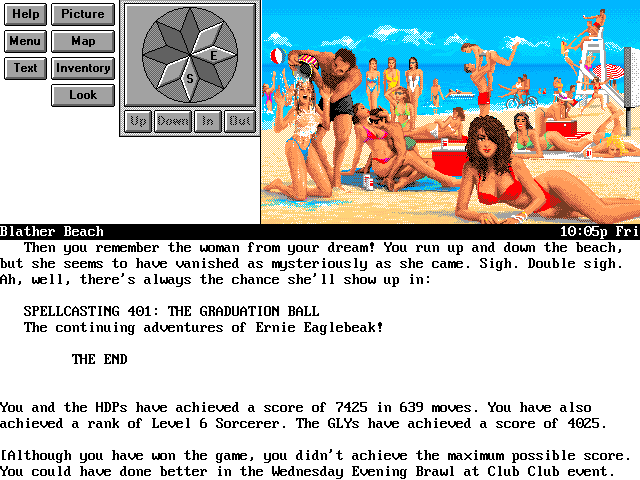 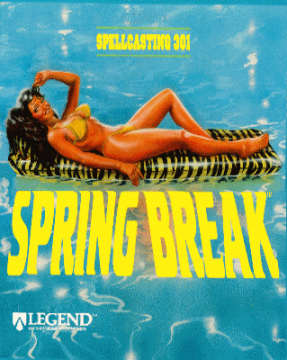 Even though the third game in the series is titled Spellcasting 301, there’ll be no lessons to attend to this time. Instead the game revolves around the sub-titular Spring Break, which Ernie and his fellow Pharts are eager to get to. So they load lots of booze, money and sun lotion on their flying carpet and take off towards the beach resort. Ernie is in charge of flying the thing (which results in what is basically another impossible maze for copy protection). But something goes wrong, and as their vehicle is short one failsafe lever, Ernie has to drop all their belongings to save their lives.

Big bummer, but at least they can relax on the beach, or can they? Unfortunately, within minutes after their arrival they clash with Getta Lodda Yu, a fraternity from a rival college and big, muscular jerks through the bank, quite in contrast with the nerds from Sorcerer’s University. Of course they want the wimps off the beach for fear their meager, untanned bodies could scare away the ladies. A blonde woman, as gorgeous as mysterious, shows up and forces the guys into a series of contests for the sovereignty over the beach. Of course Ernie and his friends are no match for their new found enemies in competitions like body surfing, bullfighting or throwing wild parties with as many hot chicks around as possible.

Given the subject matter, this episode is lighter in tone than the previous installments for the most part, but of course it doesn’t forget a proper adventurous climax. Taking place at spring break, it also shows legions of scantily clad women. The game is definitely the most naughty out of the bunch, showing more explicit imagery than ever before. The actual sex scenes, however, are extremely peripheral and one cannot help but think they’re just in for tradition’s sake. 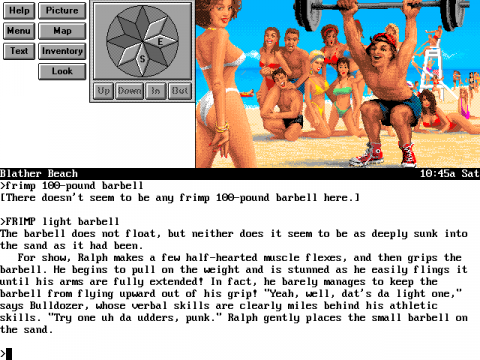 When trying to activate naughty mode for the first time, the narrator jokes that it had to be removed for the game to “qualify for an NEA grant”, but activates it nonetheless just for you when no one’s looking. Actually, though, it’s nice mode that had to take a step back. Some scenes are still censored, but a girl’s bare breasts can still be spotted in one of the backgrounds, which is more than the other games showed even in naughty mode. The adjustments to the text are also less thorough, leaving for example the wet t-shirt contest intact with all its (textual) indecency.

Spellcasting 301 is still a game of scheduling, being at the right place at the right time is as essential to the puzzle as ever. It’s much more forgiving than part 201, though, as it is OK to lose one or two contests against Yu, and Ernie has a little more time to figure out a way to win than before. As long as the score isn’t too dividing, the outcome will be decided at the grand finale, which then once requires preparations one never would have guessed on a first playthrough, so it’s a lot of trial and error once again.

Still, Meretzky once again doesn’t fail to reward the ordeal he puts his players through with the wittiest puns, great slapstick and an even better implementation of the spell system for innovative puzzles. The cake takes the RATANT spell for spell mutations, which becomes one of the most valuable and most funny spells in Ernie’s repertoire. Not all his effects are equally useful, though. At least it would be hard to figure out whatever to do with UPPSSY – spell of opposites, after mutating it into DOWNSY – spell of opossums. Higher spellcasting levels aren’t acquired by accumulating points, anymore, instead our hero encounters a sorcerers’ guild that entrusts him with several side quests for that purpose. 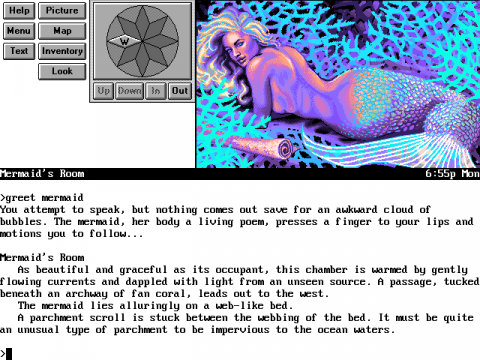 Spellcasting 301 introduced a new version of Legend Entertainment’s adventure interface, which should come to use in all their subsequent games. The menus are made out to almost look like a Windows application, but the game doesn’t gain too much from the change. Only the map is vastly improved, as it now gives an abstract overview of all visited locations. And thankfully so, as the terrain is vast this time.

On the technical side, the game now uses the VGA standard for the graphics, generally in 16 color mode for a bigger vertical resolution, which results in 3 more lines of text that can be displayed on one screen. Whoever deems that still too little, can switch almost the entire interface off to get a full text-only mode. Sometimes the game switches to hi-color low-resolution mode, for cutscenes in comparatively ugly pixel art and gratingly inappropriate digitized photos on the chapter cards. A musical score now plays at all times, with versatile, fitting melodies. Hearing a variation of the theme from Epyx’ California Games at the beach or hints of Sergio Leone’s The Good, the Bad and the Uglysoundtrack in the stereotypical wild west town would greatly enhance the experience, if it wasn’t for a seemingly trivial, but significant problem. The music changes upon most screen transitions and causes a noticeable pause each time. At latest after one or two restarts, this gets so annoying that one just wants to turn it off in order to progress faster (fortunately the game gives that option).

Spring Break offers a welcome breath of fresh air after the first two games felt very similar in tone and composition of the puzzles. Despite the change of location it contains many nods toward its predecessors, although they’re never more than brief cameos this time. Its elements at times seem to fail to form a cohesive whole, but that it makes more than up for through sheer power of creativity. This last episode could have been a worthy conclusion to the series, only it wasn’t. For …

Spellcasting 401: The Graduation Ball – none (never)

The Spellcasting series would have come full circle with this final chapter, where players would have accompanied Ernie Eaglebeak to his graduation. Endings of 301 promised wild orgies and a reunion with the woman of Ernie’s wet dreams (which for once wasn’t Lola). Unfortunately, this game has never been made for whatever reasons, leaving the series a tetralogy in three parts. A shame, but after Leather Goddesses of Phobos 2, it may be for the better not to have seen Spellcasting jump the shark and make a transition to point & click adventures, too. It’s puzzling that no one decided to pick up the series again, so far. After all, it’s become legally hazardous to create new franchises about ordinary guys turned students of sorcery ever since the Harry Potter hype, a phenomenon that already helped to resurrect Simon the Sorcerer. But not even a re-release of the old games is in sight, making them hard to find nowadays, as they have last been compiled with the Spellcasting Party Pak in 1993.