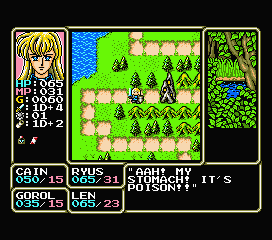 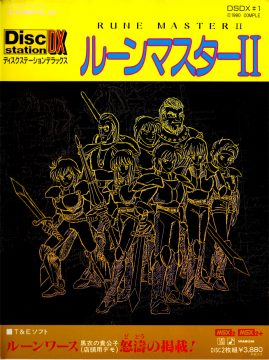 One year after the release of Rune Master, Compile returned with a sequel. Released as a standalone package in the Disc Station line, the first to be labeled Disc Station Deluxe (although it also contained a demo for Rune Worth, another very famous RPG), it improved upon every aspect of the original, and this time Compile made sure that the game remains balanced, challenging and fun.

This time, the manual outlines the story and introduces our cast of heroes, though the game did preview with an animated Notice demo on the Disc Station #12. Both the manual and intro tell the same story:

The small kingdom called Fleart.
The land is located in the southern sea and it is surrounded by Lias shore
Because of the shape of the shore, the kingdom had not experienced any invasions
and it had been a peaceful, beautiful kingdom.
The people there admired the generous king, Lire, and the 8 castle knights who kept the peace.
However the peace was broken by the military of monsters led by the masked knight Azasort,
who came from the far north.
The 8 castle knights fought against them everywhere trying to prevent the invasion.
But one of the ministeres betrayed and Azasort invaded the castle
To save the king, the knights tried to flee the castle,
but the betrayal affected the trust from the civilians for the knights
They have no support from the civilians, and now forced to fight on their own.

He was raised in a family of knights, so his ambition is very much high compare to the rest of the knights.

She is only 17 years old, yet she is entitled as one of the castle knights for her accomplishments.

He owns a Ramen restaurant that he inherited from his father, but he still fulfills his knight duties.

He has good hands that got the king’s attention. He is so called an engineer.

He was an orphan whom the king raised as a castle knight. His loyalty toward the king is tremendous.

This boy was raised in the wild by an old guy who hated humans. He more or less follows his instincts when he takes an action.

A mysterious girl who is said to be from another country. There is a rumor that she is a princess of a country.

She has a bad temper and gets into fights, but she has a strong sense of justice. She is very vigorous.

Like the first game, you have the choice of playing single player with three CPU controlled rivals or invite three of your friends over to roll some virtual dices. The CPU still makes some facepalm-worthy choices and drags out a lot of time, so your best bet is again to either control all four characters yourself, or get your buddies to play. Even though the cast has expanded to eight characters, the individual special abilities have been cut, so the only difference is the visuals. The colors are much more vibrant in this game, and the art style has gotten a facelift with more professional looking illustrations for both the characters and events. The board is now twice as big, with tons of paths to take, though they all lead to Azasort’s castle one way or another. The towns are also much more important in this game and serve more of a purpose other than just buying new armor. 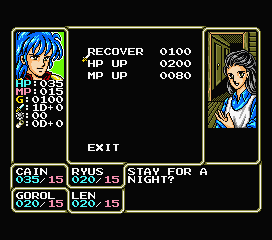 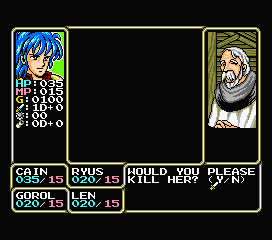 Almost all the towns now have elders, which give you sidequests. While this was also featured in the first game, it was much more infrequent than it is here, and all the missions give a good pay day, which allows you to upgrade faster as the bosses rapidly get harder. As soon as one of the knights has finished the quest given to them by the elder, the option to take on the mission goes away to avoid people just dying and repeating the mission for easy cash. With the added size of the map and the many paths to take, it really helps lengthen the game quite a bit. The towns also acts as a checkpoint where you respawn if you die, so make sure you visit them.

Another new addition to the game is gambling. Now you can go to town and put your bets on racing turtles. Yes, here we place bets on a race with the slowest animal on earth. You can bet from 100 to 500 gold, and you place them all on your lucky number and await the results in excitement. It’s pretty fun when you got friends there twitching in excitement as the little bastards slide past the finish line.

The main villain of this game, Azasort, is much more badass than the crazy pink frog faced in the first game. He looks like a cross between The Guyver, Mazinger-Z and Optimus Prime, and he’s tough as all hell. When you first reach him, you most likely won’t be strong enough yet and go back to town to upgrade your weapons.

Azasort, along with all the playable knights, has lines of actual spoken dialogue, which is quite impressive for an MSX2 game. While all they say is “Yatta” or “Shi-ne”, it adds a lot to the atmosphere of the game, especially the last battle. The music is excellent too, from the heroic main theme to the desperate battle theme, it’s MSX awesomeness from beginning to end.

The intense battle finally ends and the king re-emerges to crown the new Rune Knight, and thus ends the story of Rune Master II. It’s an improvement on all accounts and truly an enjoyable experience if you never tried this genre before. The different trails will have you keep coming back to try exploring the entire map and experience more hidden events.

OASIS’s translation is a bit better in this game, and for the most part it’s easy to understand everything clearly. There are still some bugs, though, and one of them is pretty damaging. After defeating Azasort, the dialogue window displays a lot of gibberish text. Originally this would read that the monsters have left Fleart and the king returns. The most severe bug is in the character selection area. Because of some faulty code in the naming system, the game crashes if you choose a certain selection of characters. This means the game often resets after you have chosen your team. Even though the characters have no special skills, it’s quite annoying to constantly go name your character over and over until the right combination is found. Hopefully some translation group will go over these games one day to better the quality and fix the bugs.

There is yet another way to explore the world of Fleart: Compile is first and foremost known for their shooters, so apparently they couldn’t help themselves and included a secret shooter in this game. If you type the word “omake” on the title screen, it’ll fade out and you will be controlling a space ship flying over Frealt shooting down Moo Niitanii’s face and other enemies.