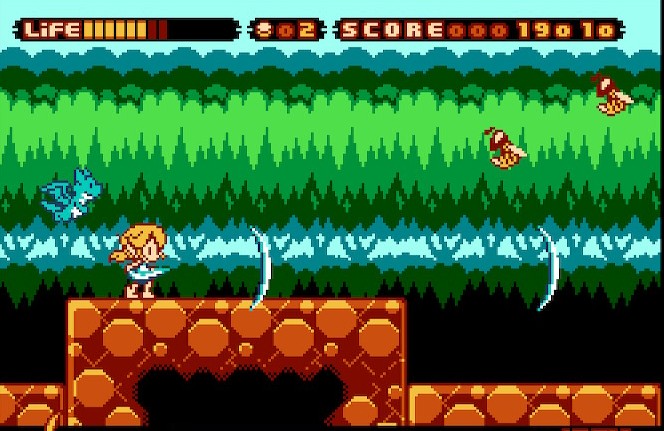 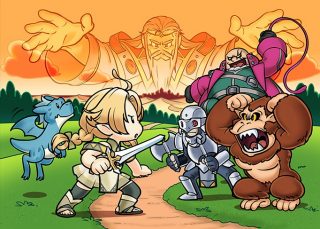 When 5pb/MAGES put out the re-release of Steins;Gate Elite, they commissioned an adventure game in the style of an 8-bit Famicom title. Following this up, with the remake of YU-NO, they produced 8-Bit Yu-no’s Great Adventure, a retro-style side-scrolling action, included exclusively as a download code for the Switch version. 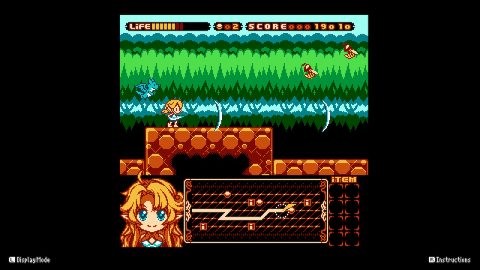 The game stars Yu-No the elf girl, as she fights through the fantasy world found in the second half of main game. (Note that the concept itself is somewhat spoilerly.) Rather unusually for this type of game, the screen scrolls automatically, as you jump over pits, kill enemies, and grab power-ups. By default, Yu-No is in child form, with a sword that shoots little energy waves. Grab an apple and she grows into her adult form, which is slightly more powerful, but she’ll revert when getting hit once. Enemies attack quickly and aggressively, and they can easily overwhelm you, at least until you find some weapon enhancements. You have a fairly lengthy life meter though, and health restoratives are common. Additionally, if you grab an egg, you’ll summon Yu-No’s dragon buddy Kun-Kun, who can she use to fly. While he’s killed in a single hit, rather helpfully he’ll end up as a meat leg that you can chow down on to max out your life meter. It’s a little grim that you’re eating your pet, but even in death, he’ll do his best to let you journey onwards!

The main gimmick here is based on the ADMS time travel system from the main adventure game. You can collect jewels that let you pause the game and rewind at any point in the past. Acting sort of like a rewind function in an emulator, you can use it to undo mistakes, but it has a more important effect, as you can also hop onto different divergent timelines. The actual stage construction is identical across them, but each has different items, while a map at the bottom of the screen indicates which line you’re on. At certain points, you’ll happen upon a time spiral, which is effectively a dead end, so if you don’t use a crystal to time travel backwards, then you’ll get an immediate game over.

The ultimate goal is to explore all of the timelines and grab all of the items. Some of these are coins, which are score bonuses, but others are permanent power-ups that increase your strength, let you survive falling into pits, or give extra information on the divergence map. The most important object to find is the key which will allow you to continue past the fourth level and onto the final encounter. As such, technically you’ll be playing parts of the game’s four levels over and over, hunting down all of the item boxes. You can transport back right to the beginning of the game, if you want, though any bosses you’ve defeated remain killed. You can run out of crystals, of course, but if you die, you can continue and granted a few extra, plus you keep all of your items. 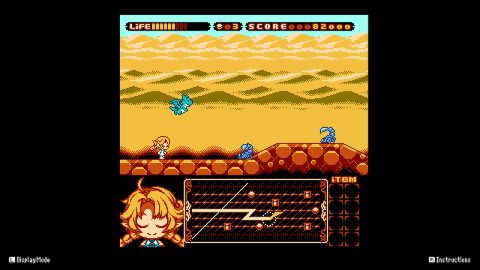 Despite the fact that this is a short freebie game, there’s some well known talent behind 8-Bit Yu-no’s Great Adventure. The visuals were designed by Maki Ohzora, the graphic artist from Westone that worked on many of the Wonder Boy/Monster World games. The chiptune music was composed by Takeshi Abo, who wrote the music for many of 5pb’s visual novels like Steins;Gate.

8-Bit Yu-no’s Great Adventure is interesting because takes the central concept of the main game and reworks it to function in a completely different genre. It’s not very long, and even exploring everything to get to the ending will probably take less than an hour. A lengthier game that focused entirely on replaying old levels would probably get pretty old, so the short playtime ensures that the gimmick doesn’t wear out its welcome. Once you beat the main mode, there’s a “Nightmare” difficulty that will kill you in a single hit, forcing you to really learn the enemy’s patterns if you want to get anywhere, so there is some lasting challenge for those looking for it.