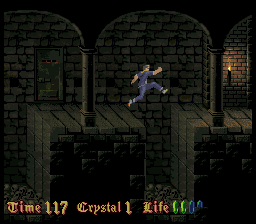 The 16-bit Nosferatu offering by Seta can hardly be described as even maintaining a most tenuous link to the movies. It seems like the developer just dodged to the title because “Dracula” for video games was already taken by Konami (as Castlevania was called Akumajou Dracula in Japan). Even a brief look at the cover reveals that the vampire here adheres to the handsome womanizer image of Dracula rather than the ghastly spectre that was Orlock. The entire game takes place within Transilvanian castles, where the Jonathan Harker lookalike Kyle seeks to rescue his love Erin from the vampire’s clutches. On the continue screen there is a photo of Kyle with his sweetheart, which is dated March 8, 1990 but nothing else in the game hints at a modern times setting, except maybe for the protagonist’s clothes, which still look rather period-neutral. Even on his way to Transylvania, he rides on a horse instead of any kind of motorized vehicle. 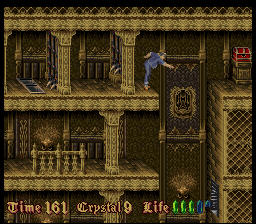 Nosferatu plays a lot like a Prince of Persia clone, so platforming controls are rather stiff and methodical. Kyle can either jump straight upwards to grab a ledge and pull himself up or forward to leap towards another platform on the same floor, and falling a height greater than two stories kills him in an instant. Running is achieved by double-tapping in the same direction, but it doesn’t work all that well and can be quite annoying, especially when the would-be vampire hunter has to slide underneath low ceilings or gates.

The levels are smaller and simpler than what Mechner’s Prince had to face, but there is no shortage of deadly traps – spikes coming out of the floor and ceiling, crumbling floors, moving buzzsaws and falling gates that crush the hero under them if he doesn’t slide beneath them fast enough are just a few examples of the many morbid ways to die. The visual depiction is never as graphic, though. There is not a drop of blood to be seen, which makes the game seem surprisingly toothless for a vampire horror story. While there is a time limit, this is an arcade style per stage constraint and reset after each death. There are a few Prince of Persia type puzzles with timed floor tile switches and even movable walls, and sometimes it’s possible to explore alternate paths that may even lead to different exits. Overall, it’s much less free-roaming adventure and more tightly constructed obstacle course. 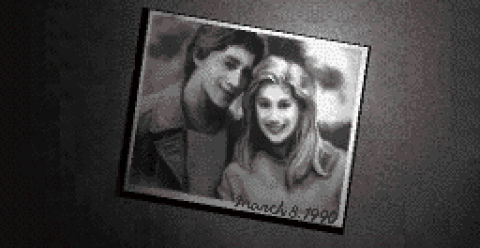 There are a few treasure chests that can be raided, which always reveal crystals of different colors that signify either healing capabilities or life bar extensions. There’s also a third type of crystal, whose function is rather unique. Gathering more of them changes the moves Kyle can perform in his combo, but every time he is knocked down on the floor by an enemy or by carelessly running into a wall, he loses one of them. When the stock of nine is filled already, picking up another crystal of the same color functions as a healing crystal. Often it’s lucrative to press “up” several times on a chest, as most chests house several crystals, but Kyle only ever takes out one at a time.

Of course the Transylvanian castles are anything but abandoned. The only humans encountered are withered victims inside of dungeon cells, but all kinds of movie monsters roam around the halls to deal with intruders, from goblins and mummies to floating eyes and Frankenstein monsters. Fighting them surprisingly feels like a beat-em-up, so not-Jonathan Harker raises his fists when he approaches an enemy to unleash his multi hit punch combo, but he can also employ two types of jump kicks and an ellbow tackle for a change of pace. Unfortunately, his attack range is short, and it’s difficult to find the optimal attack distance for most enemy types. Often it’s almost impossible to dispose of them without getting strangled by them for a bit. Even if it weren’t for the many instant deaht traps, the monsters will very frequently kill most players on any but the easiest difficulty level.

While Japanese players were limited to eight credits, the US version of the game allows to continue for an infinite amount of tries, and the player is never set back too far. Continuing more than seven times still results in the bad ending, though, where the damsel ends up being turned into a vampire.

Before completing any of the six castles, the player is challenged to a boss fight, which usually takes place in outdoor areas. Some of these are rather genre typical, like a hunchback who turns into a werewolf in mid-battle, or a staggering, clingy zombie, but then Kyle has to fight off a pair of apes in loincloths, an angry cloud of fog and a rock golem who shoots his arms as rockets, Mazinger Z style. During those showdowns, the issues with the hit detection become even more frustrating, and some of the later bosses almost seem invincible without a portion of luck. The vampire lord at the very end almost feels like a letdown in comparison, even though he adheres to the Castlevaniatradition of coming back for revenge in a transformed state – here a giant, humanoid bat.

Befitting for an imitator of Prince of Persia, much attention is paid to the animations. But even in still images, the pixel art looks very detailed for a mid-era SNES title, but the colors look very monotonous. Every castle has a different tapestry, but that can’t conceal the fact almost through the entire game, the player is looking at nothing but brown-ish, grey-ish and green-ish castle walls. The music also feels subdued compared to the synth orchestras of a Castlevania, definitely more on the lingering, submerging side of the spectrum, full of samples that sound like heavy breathing and foreboding melodies. In a way that makes the soundtrack more worthy of a horror game, but every once in a while there is a tune that sounds more game-y than eerie and breaks the spell.

Seta’s Nosferatu may be a decent 2D horror action game, but the Nosferatu name is wasted on it. The profile really does spell “Prince of Persia meets Castlevania“, but it doesn’t one-up either of these role models at their game, and especially the combat, but also the controls in general feel off and not very satisfying. It was originally supposed to be a first generation SNES title – first previews of the game that seem to show a rather advanced version appeared in fall 1991 – which could have given it a unique place in the system’s early library. But somehow development dragged on for years, and instead the game became a late arrival for the system, long after the much improved SNES version of Prince of Persia and several similar games. Early accounts tell of three college students that were supposed to be trapped within the castle instead of two, and a range of weapons like knives and maces, none of which appear in the final game.