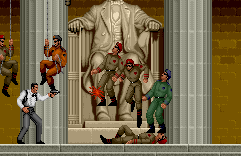 In 1988, Data East’s Bad Dudes famously asked the player if they were a bad enough dude to rescue the kidnapped American president. It was a theme Data East would return to a year later with Sly Spy (AKA Secret Agent in Japan and Sly Spy: Secret Agent in the home computer ports). The leader of the free world is once again abducted, this time by a terrorist organization called the Council for World Domination, and there’s only one man who can save the president – a secret agent who is as close to being James Bond as possible without actually being James Bond.

The game even begins by prompting the player to enter their own three-digit code number – perhaps surprisingly, there are no consequences if 007 is entered – before the sly spy leaps from a plane, kicking off the action with a skydiving shoot-em-up section. Terrorist agents fall alongside Sly Spy, and he must pick them off with his handgun before unfurling his not-particularly-covert stars and stripes parachute.

Once the hero has touched down, Sly Spy becomes a side-scrolling action shooter. These stages make up roughly 60 percent of the game’s content, and it becomes clear that the game’s other major influence besides the Bond movies is Namco’s classic Rolling Thunder, itself an homage to the spy films of the 60s and 70s. Unlike in Rolling Thunder, Sly cannot enter doorways in the background to hide or find items, nor can he vault between platforms. Otherwise, there is a lot of similarity between the games. The player presses forward, eliminating the terrorists (whose forces, as was traditional for villainous organizations in 1980s video games, contain some mohawked punks) with their trusty pistol. The pistol’s ammunition is limited, and can be replenished by collecting items dropped by defeated enemies, but if you run out altogether, Sly resorts to kicking attacks. It’s a familiar brand of gameplay, and a fairly hectic example of the genre, as many bad guys appear at once and will quickly swarm over you unless they’re eliminated efficiently.

The rest of the game is composed of less traditional action stages: as well as the opening skydiving scene, there’s a motorcycle chase along a Washington highway that’s enlivened by your ability to pop a wheelie to shoot down airborne enemies, as well as two separate scuba-diving stages that are packed (as you might expect, given Sly Spy‘s inspiration) with killer frogmen and deadly sharks. Variety seems to have been Data East’s main goal, with none of the stages lasting longer than a few minutes. Accordingly, Sly Spy has a breakneck quality as the hero dashes from one locale to the next, with each stage preceded by a still image of Sly getting information about his next target. It’s a noble effort, but as a result the gameplay suffers from a lack of focus, with no one style of gameplay rising above the mediocre. The on-foot shooter stages are probably the most enjoyable, perhaps because the developers had the experience of working on previous games to inform their work – Sly Spy‘s planner, Makoto Kikuchi, also worked on Bad Dudes – while the other sections aren’t quite as much fun. The skydiving segment is slow paced, and the same is true of the motorcycle chase – it just doesn’t feel fast enough, and the bike is barely mobile at all, leading the stage to devolve into simply ducking under enemy bullets and firing back. The scuba stages are better, despite feeling a little imprecise.

Sly Spy will undoubtedly hold extra appeal to James Bond fans, as the game is packed with references to the movies. Sly is decked out in a tuxedo, and his pistol looks about as much like a Walther PPK as it can in so few pixels. There are bosses based on Jaws and the hat-flinging Oddjob, and the last stage sees Sly putting a stop to a rocket launch in a manner that owes a substantial debt to Moonraker. Also, by collecting enough of the parts occasionally dropped by defeated enemies, he can assemble and use the Golden Gun for a limited time, a weapon that fires energy bolts.

There are also plenty of nods to Data East’s other hits, including posters for Chelnov and Karnov, billboards advertising Bad Dudes, and the rather macabre sight of RoboCop‘s headless corpse lying on the floor of one of the game’s later stages. Curiously, the “Oddjob” boss is a similar build to, and is standing in the same pose as, Karnov himself. 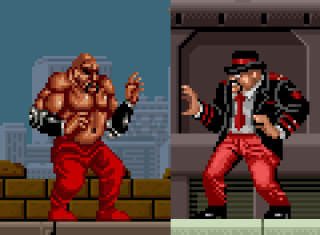 As nice as it is to imagine a Karnov dynasty spreading out through the entire Data East universe, sadly, the boss battles are the weakest part of Sly Spy. Aside from an entertaining struggle against a pack of hungry tigers, most of the bosses don’t do much in the way of fighting back, and too many of them can be defeated easily because their attacks, unlike Sly’s bullets, don’t travel all the way across the screen. In the case of “Oddjob” and the deep-sea diver that guards the underwater stage, it’s a simple matter of standing as far away as possible and firing, while the final encounter is an anticlimactic battle against a force-field that you merely have to hit a certain number of times to destroy. Sly Spy‘s greatest strength – its sense of variety – can also be a weakness, because some features of the game flash by so quickly, the player might never even experience them. This is mostly true of the power-ups: there are different weapons to collect, as well as a jet-pack and an underwater scooter, but they appear so infrequently that their inclusion is almost pointless.

These flaws aside, Sly Spy has enough quality to still be a fun experience, albeit one that never reaches any great heights. It’s a good-looking game with some stand-out flourishes like the well-rendered Lincoln Memorial in the first stage, a soundtrack that’s appropriately energetic, and enough frantic action for it to be worth playing. In the game’s ending, the newly-rescued president hints that the player “missed a few things” and should go back, but this seems to be a fake-out, as there’s nothing new to find on a second loop.

Sly Spy was also ported to many home computers, handled by Ocean and Software Creations, and outside of the slower speed, they’re all relatively good conversions – even the ZX Spectrum version features all of the stages and enemies of the arcade original. Additionally, many of these ports received an all-new soundtrack composed by Tim and Geoff Follin. 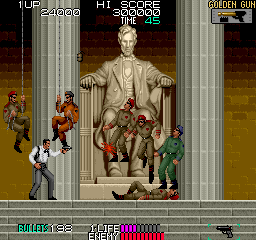 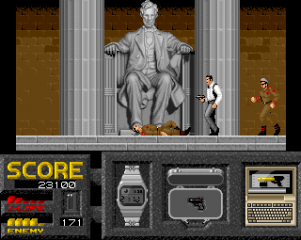 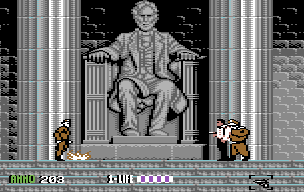 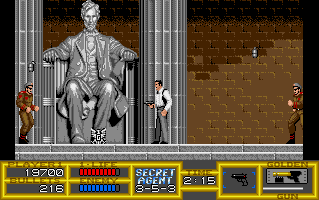 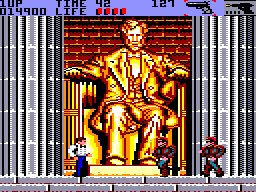