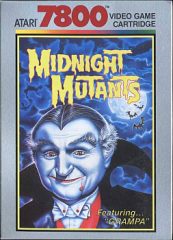 The Atari 7800 has always been kind of an oddity, when it comes to console history. Compared to the NES and the TurboGrafx-16, it saw the least amount of support, leading to a rather small number of games actually released for it. It did, however, have a pretty wide variety of games on display, from some decent arcade ports to more middling ports of home computer games. A small portion of these games were Atari’s attempt to compete with popular games seen on the NES, never quite reaching the same heights as their inspirations. You couldn’t have Super Mario Brothers, but Scrapyard Dog is just as good, right? No Operation Wolf port, but Alien Brigade is almost the same thing, kind of! And so it goes with Midnight Mutants, the system’s first and only attempt at a Legend of Zelda-style game. Given the age of the hardware it’s on, it still manages to be pretty impressive.

In the year 1747, Dr. Evil (very much lacking in the “cute sphinx kitty” department) was burned at the stake for witchcraft, promising vengeance before his death. In October 1992, young Jimmy and his grandpa are out looking for pumpkins to buy for Halloween. Dr. Evil chooses this day to rise from the grave, and as it turns out, Grandpa is the descendant of the man who killed him. Dr. Evil takes his revenge by trapping Grandpa inside a pumpkin, and sending monsters across the countryside. As Jimmy, you’ll have to roam across the map, collecting the items and weapons you’ll need to eventually face Dr. Evil and free your grandpa. Something a bit weird about the game is that “Grandpa” is pretty obviously supposed to be Al Lewis as his role as Grandpa Munster, but neither the actor or the show are ever credited in the game, or anywhere on the packaging. Given he’s right on the cover, you think somebody would have started asking for royalties.

The game itself is much inspired by the original Legend of Zelda, albeit a lot smaller in scope. You’ve got a map of interconnected screens, some of which can actually scroll in different directions. The ultimate goal of the game is to kill Dr. Evil, and bring his amulet back to the pumpkin your grandfather is trapped inside in to free him. Starting off, however, you don’t even have a weapon. You’ll find a knife you can throw in the mansion north of your starting position, but you’ll quickly need better to stand a chance against the swarms of enemies the game throws at you. From there, you’ll eventually find better weapons more suited to take out the swarms of enemies the game sends at you, diamonds that’ll increase your maximum health, and special items that’ll let you get into places you couldn’t reach before.

Just surviving the beginning of the game can be pretty tough, however, given how randomly enemies tend to spawn. You might enter a screen and only have one zombie waiting for you, and the next time you enter the same way, you might have four of them moving right towards you. Often, you’ll have enemies clump together into one mass, and given some of the narrow passages you have to hit through, it can often be tough to avoid taking damage. Most of the time, you’ll be fighting zombies. In a nice touch, there’s a lot of different varieties of zombie, like beheaded zombies that have their heads bounce when they move, or pumpkin-headed zombies that toss pumpkin projectiles at you. You’ll also have to deal with lots of bats and birds, which don’t damage your main health bar, but instead reduce your blood purity percentage. Some enemies will damage one or the other, often both, and if either your health or your blood purity hit zero, you’ve got to do the whole game over again. (It’s possible for Grandpa to resurrect you, but the conditions for how exactly this happens are so obscure that even the internet isn’t sure.)

While you can find potions on the map that’ll refill either of your two meters, once you use them, they’re gone, and the only permanent source of healing is a well you’ll find pretty far into the forest. Eventually, however, with enough time and patience, you’ll be able to get items that’ll start to make things a little less dangerous. The cross will make you invincible to birds and bats while it’s equipped, while the heart will make you immune to all poison. Most important of all, however, are the weapons. While they all shoot projectiles straight forward, each one is a pretty big leap in damage, letting you one-shot enemies that took several hits before.

The weapons are most important for the boss fights, which are probably the most impressive part of the game. They’re well-detailed sprites that take up the entire screen, although the fact that they don’t animate at all makes them somewhat less impressive. They even get their own bit of lore before you encounter them, which helps to make the feel the world, as small as it is, a little more fleshed out. While the bosses don’t do much besides move back and forth, shooting projectiles, Jimmy’s large sprite makes them almost impossible to dodge all of them coming towards you, making the fights more of a matter of who can do the most damage the fastest.

Given that you have only one life to spare and no way to record your progress, getting through the game without save states is pretty tricky. Having a map on hand to know where everything is definitely helps, although the map is just small enough that you can memorize where the most important items are. Once you know what you’re doing, it’s honestly a lot more straightforward than Zelda. It helps that accessing your inventory will give you some advice from Grandpa. This game may only have one weird, advice-bringing old man, but thankfully, he’s a lot more useful, telling you what items do, where weapons can be found, and other generally helpful advice.

Well, at least most of the time.

The production values are certainly great, given the hardware, with the animated intro that starts the game off being especially impressive. Disappointingly, the ending isn’t nearly as good. While the system being handicapped with the 2600’s sound hardware means that the music or sound are a little grating, there’s been at least an effort at giving the game a varied soundtrack. Considering it’s for a system that didn’t have a single action adventure game to its name until its release, Midnight Mutants does a pretty decent job at filling a Zelda-shaped hole. It’s a lot more compact, which can be seen as a plus or a negative, however you want to look at it. It’s no Zelda, or even a Golden Axe Warrior, but it still makes a fun choice for the Halloween season.