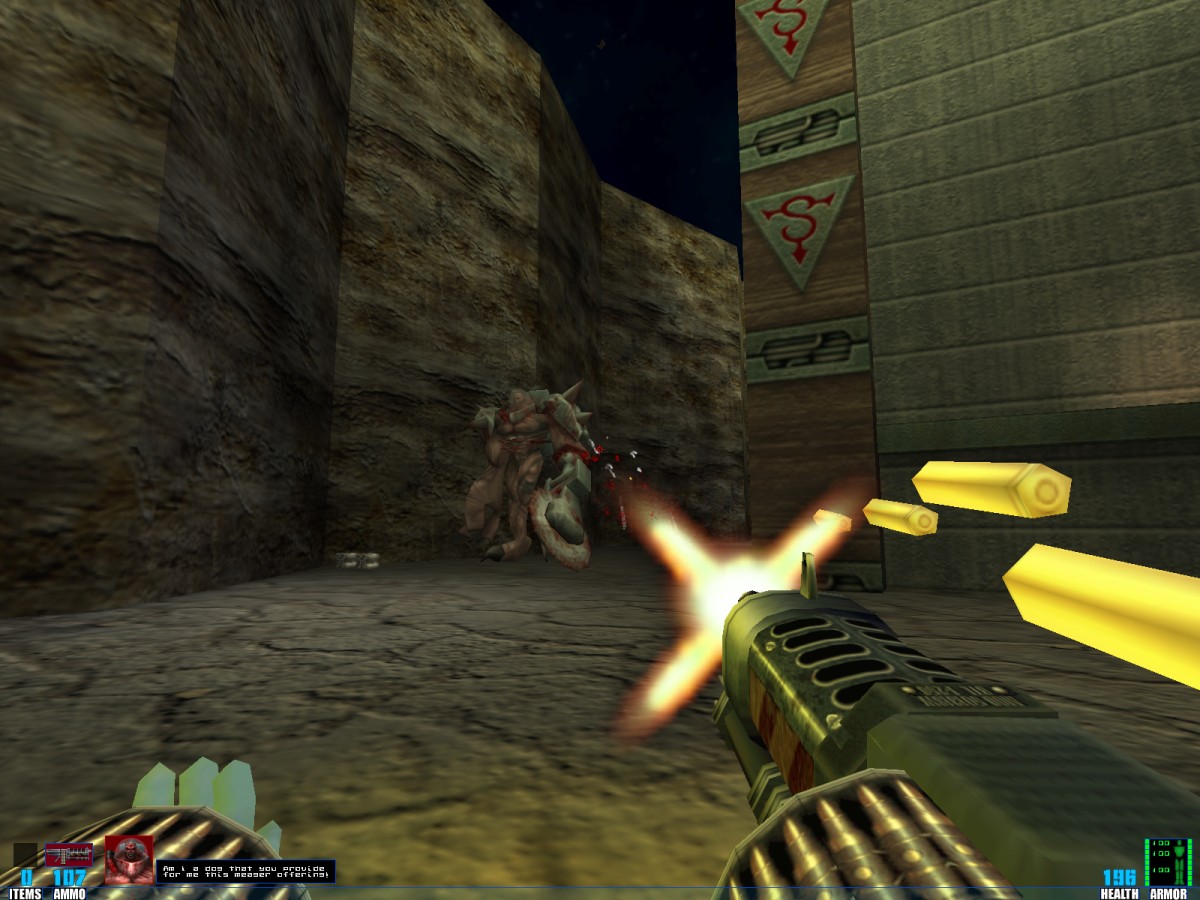 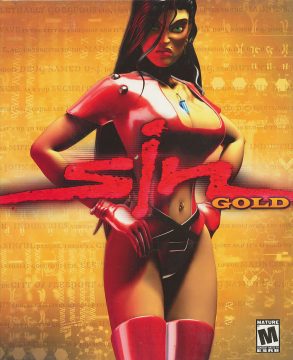 It is not impossible to imagine that the year 2037 will be a time when public police forces are replaced by private contractors, body-altering drugs are running rampant, and Half-Life 3 is still not yet released. This is (mostly) the world of SiN, a game that will live forever in shadow and comparison to the original Half-Life.  Released 10 days before Gordon Freeman’s adventure and the Source Engine would change the FPS genre forever, SiN was an innovative but buggy mess on November 9th, 1998, when it launched on the PC in North America.

SiN suffered as a result of two different decisions made in its development.  Originally scheduled for release in spring of 1998 and built on the original Quake engine, SiN was reworked and redeveloped for the Quake II engine around four months before its planned original release.  That, combined with a rush to get it to market before Half-Life led to game-breaking bugs which hurt its initial launch.  It would, however, be patched, boosted and supported for the twenty years, from the expansion (Wages of SiN), to an episodic sequel (Emergence), to an anime (SiN: The Movie), and then re-released for digital distribution (SiN Gold) along with an impending remaster, ensuring SiN remains living whether it deserves to or not.

SiN was developed by Ritual Entertainment, their first full release after having developed a mission pack for Quake.  Published by Activision, SiN would be Ritual’s signature project. The company would go on to develop a few other projects including Heavy Metal: F.A.K.K 2 and Legacy of Kain: Defiance.  SiN sold well and fueled the release of the first episode of the hopeful episodic series of sequels.  However in 2006 Ritual was sold to MumboJumbo and future episodes of the SiN series died with that sale. 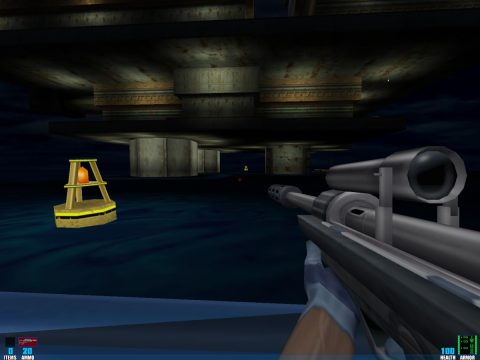 SiN is a product of the late 1990s in a way that very few games capture so honestly.  From the opening cutscene which features a random 90’s word jumble starting with the words “Sexy Evil Temptress”, you are exposed to world-building that combines the male-centered aggression of Nu Metal with the petulance of the “Attitude Era”. While its story and characters are the post child for the late 90’s clichés, the truth is, SiN is a very fun game to play.  It is an innovative moment in FPS growth. Your mileage will vary on how well you can handle that mix and whether it will be worth your time.

You are John Blade, working for Hard Corp in the town of Freeport. John is a Duke Nukem type, complete with constant one-liners.  More brawn than brains. Fortunately, he’s got hacker JC to cover the brain part, a constant ‘in ear’ story companion to give John an audience for his banter and a nerd for his hacking puzzles.

And then there is Elexis Sinclair, or “bitch” as John Blade constantly refers to her. Never have you seen a 90s FPS villain so clearly designed by a group of men and their marketing team. Elexis constantly drops sexual innuendo into every sentence, from basic commands given to subordinates to the end game cutscene. Her backstory and eventual trajectory through SiN Episodes and the films is fleshed out (no pun intended), if not reflected in the way she is actually portrayed or acted in this game.  She is a doctor “intent on changing the world and using her considerable beauty to do so”.  She was featured on the box and a majority of the promotion for the release of SiN. John Blade is a forgettable action hero that a player rarely sees more than his hands.  Elexis, as tone-deaf as she is designed, was the true star of SiN and the face of the franchise. 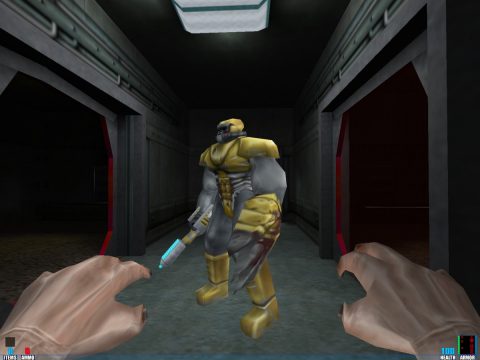 While the coating may be ripe with 90s clichés, the gameplay and level design is anything but standard for the time, and along with Half-Life, ushered in a new way of interacting with first person shooters. Even today many of SiN’s ideas are fresh in an FPS and are the ‘first’ incorporation of ideas that would increasingly become staples of the genre.  These ideas are just that; “firsts”, often early iterations on ideas that would become more commonplace in future games.

Armor pickups are collected in three parts, torso, head and legs.  Damage is taken to each section of armor depending on the enemy aim.  It’s a neat idea, though the truth is in the heat of battle, one rarely notices which section of armor is being hit, nor what type of armor you are picking up. By the same token, enemies are more than just one large hitbox.  A shot to the arm can cause an enemy to drop their weapon, a shot to the leg may have them limping.  Headshots are often definitive kills and each weapon affects both the look and impacts of the damage taken.  Shoot an enemy too much in the torso and he will not drop torso armor.  These combine to promise a more dynamic combat than a standard FPS creating options beyond just “shoot” at everything that moves, but in practice, it’s hard to think of a different strategy when a new enemy pops out.

Weapons are fairly standard FPS fare, everything from a pistol to a chaingun, you’ve seen it all before. Underwater levels add a speargun, and there are spider mines available which are especially fun in multiplayer.  The Quantum Destabilizer is the ultimate weapon, formed by collecting a series of parts throughout the game.  To increase the power of its impact, the player holds down the ‘fire’ button, but hold it too long and the weapon will explode taking you with it.  Unfortunately ammo for most weapons is pretty hard to come by.  Right from the start you’ll find yourself running out of ammo for the most basic weapons and needing to resort to fists. 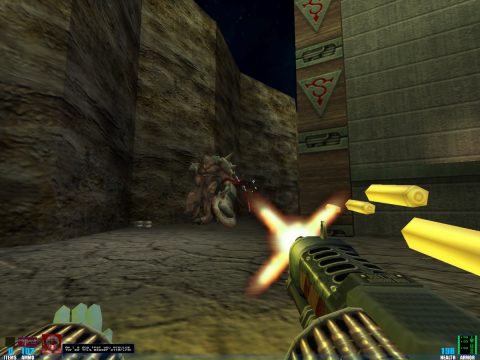 The game’s single player is divided into six unique regions and a total of 18 levels.  The game touches lightly on elements of an “immersive sim” to both build character into the game and provide different ways of progressing through an FPS beyond just ‘kill’.  The Quake II engine allows for interactive level components allowing you to destroy the environment, solve unique puzzles and participate in some light platforming.  The platforming elements are a little annoying and unnecessary, but they are few and far between and rarely slow the pace of the game enough to turn you completely off.

Some of the best moments when you can explore the world laid out.  A particular highlight is being able to dig into a computer and exit out into a sort of DOS shell that can be manipulated and explored using traditional DOS commands.  These moments speak to how much more is beneath the surface of the game and how much care actually went into creating the world itself.  The world isn’t open, but it isn’t necessarily linear either. 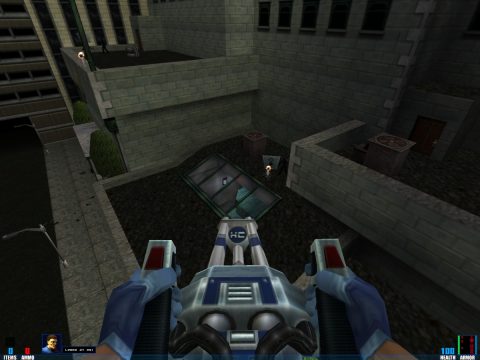 Gameplay-wise, SiN tries to be more than just a standard FPS.  The game starts on a helicopter with the player in control of a mini-gun.  Future levels involve driving vehicles (pretty good), basic stealth elements (not good) and the underwater (not bad).  It features cinematics to progress the story along and the Quake II engine is used to full effect to allow destructible environments which are used for puzzles and storytelling elements.

Multiplayer deathmatch features unique levels and is well designed.  The standard FPS weapons are all available and the Sniper Rifle in particular adds some fun to hunting down your friends.  Elexas is a playable character here and in her string bikini is not only ill equipped for a shootout but impossible to hide in the shadows of a level, making her easy prey.  A particular standout is “Spry”, developed by Richard Gray, which is credited as the first “shrunk player” level in an FPS.  Miniaturized players contained within a small library, hide under couches and chairs or stand above on the top of a picture frame.  The change in perspective is a creative addition to the FPS deathmatch world and one that was replicated in other games.

The last few levels of the game are where SiN starts to fall apart. Enemy models start to get repetitive, the level design makes less and less sense.  There is much about this game, from it’s buggy initial release to its less than stellar last few levels that speak to how rushed this game was and how little time the team had to implement the Quake II engine changes.  Instead of relying on the strengths they had built into the game and fleshing out a game that could compete with Valve’s creation, Ritual pushed to the finish line too quickly and in a Frankenstein engine that combined both Quake games without fully mastering either one. 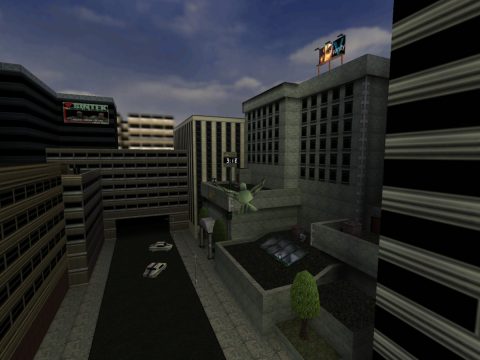 The care the game was given in the early going is evident throughout the production.  The manual is 47 pages of lore filled backstory.  The original website for the release was packed with character descriptions that speak to how well fleshed out some of these otherwise cardboard cutout characters ended up in the game.  The first half of the game is a rich, deep experience full of unique takes on the FPS genre and the way storytelling could be incorporated.

When you start to dig into SiN, You can see why it continues to be supported so many years later with remakes and films.  For those that choose to dig into what SiN could have been you can only wonder what it still could be.