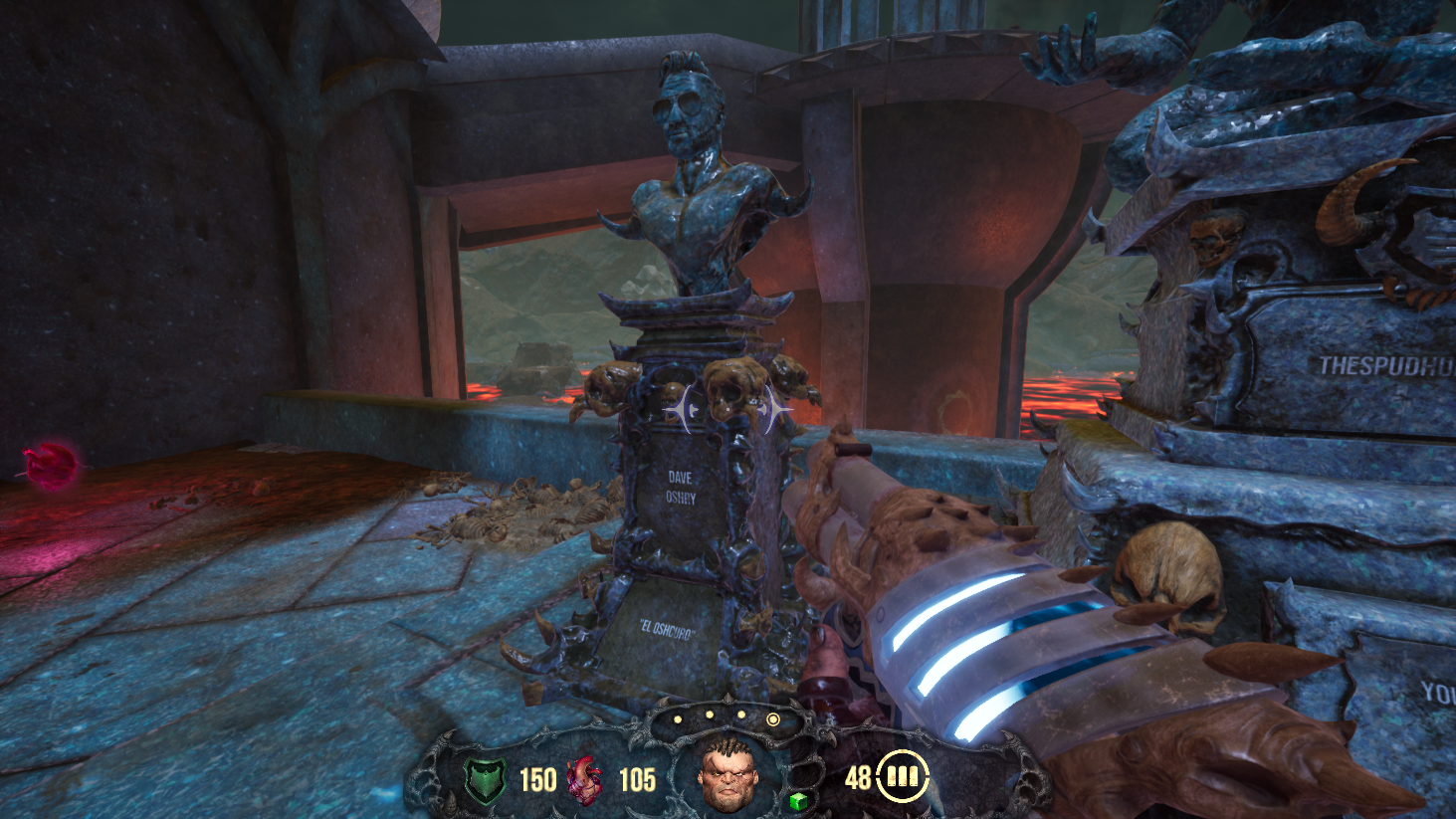 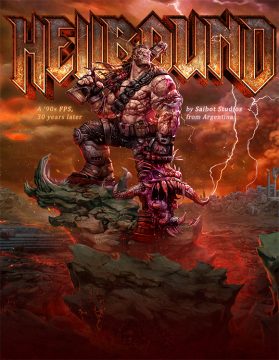 An interesting development in the indie and small games scene is that there tends to be teams that try to make games like the big guys, and often make odd decisions doing that. You have Spiders sketchy record making Bioware-likes, Frogwares making glitchy adventure games and action RPGs with lots of weird ideas taking notes from Telltale and Bethesda, the storm of battle royale and hero shooter knockoffs, and so much more. It’s a weird scene where ambition meets a lack of resources, and while it’s hard not to respect what gets accomplished, the result just tends to be very flawed. 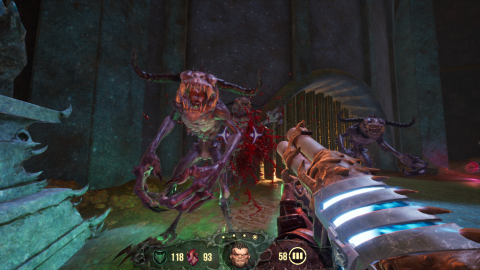 Enter Hellbound, a kickstarted game that proudly advertises itself as a 90s FPS made thirty years later, made by a team in Argentina called Saibot Studios. You may remember them for the indie fighter The Black Heart and their Doorway adventure horror series. That selling point is…sort of true? It plays like a Quake style game, absolutely nailing the speed, bunny hopping, and strafing. The guns have good feedback, the enemies gib satisfyingly, and the story is a threadbare pile of swears where a Hell barbarian goes back to Hell when humanity asks him to and kills demons so much that it eventually revives his race or something, don’t worry about it, shoot monster. Fists, “shotgun” (more an assault rifle), triple shotgun that is just wonderful, a rapid fire weapon, rocket launcher with grenade alt fire, and Big Stick for Big Hits, yeah baby.

It is fun to play, but it is quite jank, and in particular, Unreal Engine 4 jank, making use of some very familiar elements common from the early 2010s. Hellbound doesn’t have any of the 90s aesthetics graphically, just in concept art (very dark age stuff), meaning what you’re left with are goofy looking 3D models that can move with a fun, rubbery style, but they’re always…off. There’s a weird gloss over a lot of models, and some animations are worse then others, and the good ones tend to have weird timing. It’s like the team wanted to make a Doom 2016 looking game but just did not have the money for it, despite the Unreal grant it nabbed. 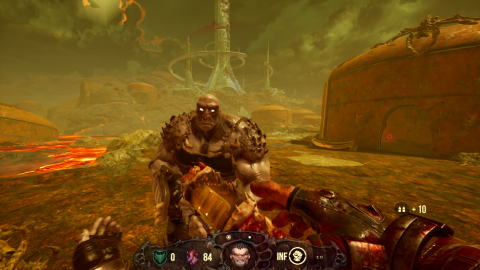 It also doesn’t have the level design of a Doom or Quake. It’s closer to modern throwback shooters pre-Dusk, i.e. modern shooters with a more action focus over tactical that try using modern aesthetics that tend to clash with the goofy subject matter and tone. Shadow Warrior 2013 would be the best of this style of game, while everything else enters a much more awkward territory (Serious Sam 3, RotT 2013, Duke Nukem Forever, NecroVision, etc). There is certainly a charm to that, of course, especially with that one blood effect everyone uses that Hellbound also uses, but it definitely wasn’t the feel the developers were going for.

There’s also the fact that Hellbound feels weirdly bare, the game basically being a single episode long in terms of supplied levels. The weapons work due to how different they all are, but it is a surprisingly small amount for a game with so much effort behind it graphically. That said, you can also make out the team’s limits, like how the entire game is covered in a gross fog, most likely some post processing effect, and starts with a terrible FOV you can thankfully change in the options so you can actually see enemies around you. Even the score, which definitely fits the game, is surprisingly without track variety. It’s almost entirely fast guitar and drums with little in the way of making the tracks stick out from one another, the one exception being Zardonic’s Hell & Gore, which sounds like something that be right at home in a modern Doom game soundtrack. It’s a bit more reserved and sticks out against all the basic but effective metal. 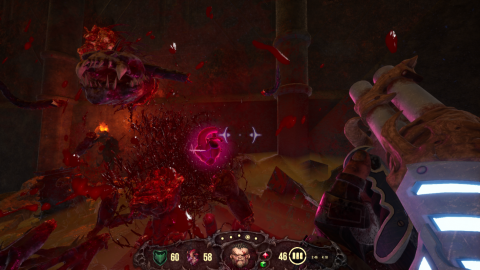 Hellbound doesn’t feel entirely finished, and while there’s a bit more meat on the bone as it goes as levels get longer, it’s not much compared to the likes of ULTRAKILL, Nightmare Reaper, HROT, Project Warlock, and countless others at this point. It has no unique hook and a lack of content, resulting in a lukewarm reception on Steam, made almost comical by the dev team’s rep regularly making posts in the kickstarter updates with censored swears (which are also on the store page). Also, Hellgore, who makes the gores in Hell, says the F@!K word a lot.

It’s weird Hellbound is like this at all. Why not explore an old school graphical style? Why not keep costs down and use low fidelity to give you more leeway in the budget to make more stuff for the game? Why was there so much focus on the graphics being this ambitious when there was no way the ambition wouldn’t be met? The answer is simple: That’s what they wanted to do because it would be cool. The core team for this game was small, with like two or three guys doing the actual design and tech work. There’s passion here, and a real love for the classics which shows in how much the game nails in the fundamentals, which makes why its like this all the more baffling due to how the boomer shooter scene zigged where Saibot Studios zagged. 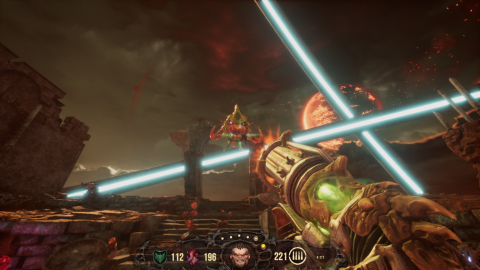 This is some strange stuff, but it’s interesting, a fun variant of South American jank that is lacking, awkward, yet still works with the simple and strong foundation. A bunch of nerds in Argentina wanted to make a big boy shoot game and so they did it, without having any of the resources to polish it, and darn it, it’s hard not to respect that gumption. They saw Dave Oshry strike out with Rise of the Triad 2013, and said to themselves “yeah, make it like that!” (fitting he gets a bust in the game in his honor).